Students at Panorama elementary school in Coquitlam were greeted by painted tags and other graffiti across the back of their school when they headed to class today (Monday); school district promises to have the mess removed today
May 17, 2021 1:30 PM By: Diane Strandberg 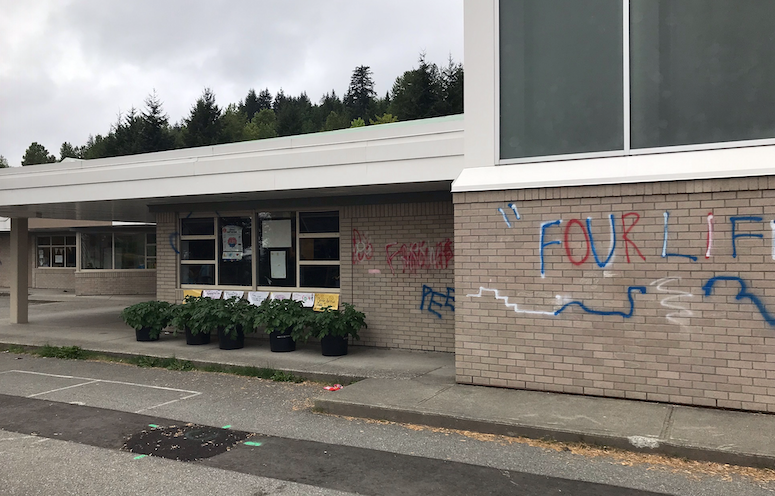 The back of Panorama Elementary School in Coquitlam was covered in graffiti over the weekend.Submitted

A Coquitlam elementary school hit by vandalism over the weekend will have the mess cleaned up today (Monday).

The site of painted tags covering walls, doors and window screens at Panorama Elementary on Westwood Plateau created a depressing picture for hundreds of parents and children when they arrived this morning.

“It’s not a great way to start a Monday,” commented parent Steve Leung, who said his children were 'bewildered' though not too upset by the tags spray-painted over the back of the school.

It’s suspected that area youth did the damage; the mess is so extensive it will take awhile for it to be removed by professional cleaners.

Leung said parents and kids expressed disappointment and he was glad the school made an announcement that the damage was known and reported. “The school did everything it could,” he said.

Annually, it costs the district about $100,000 to repair broken glass and remove vandalism.

However, a spokesperson for SD43 said vandalism has not noticeably increased in the last several months during COVID-19, with about $50,000 spent for repairs in the last six months.

“In general, there has been a decrease in the number of incidents over the years,” stated Ken Hoff, assistant director of communication and community relations, in an email.

Still, there are occasional spikes in vandalism.

In 2017, vandals broke into Montgomery middle school in Coquitlam, causing a lot of damage, and, in September 2020, someone in a truck ruined the Summit middle school field.

While the school district has security to monitor school sites, it suggests people who witness suspicious activity to call the non-emergency number and report it to police: 604-945-1550.