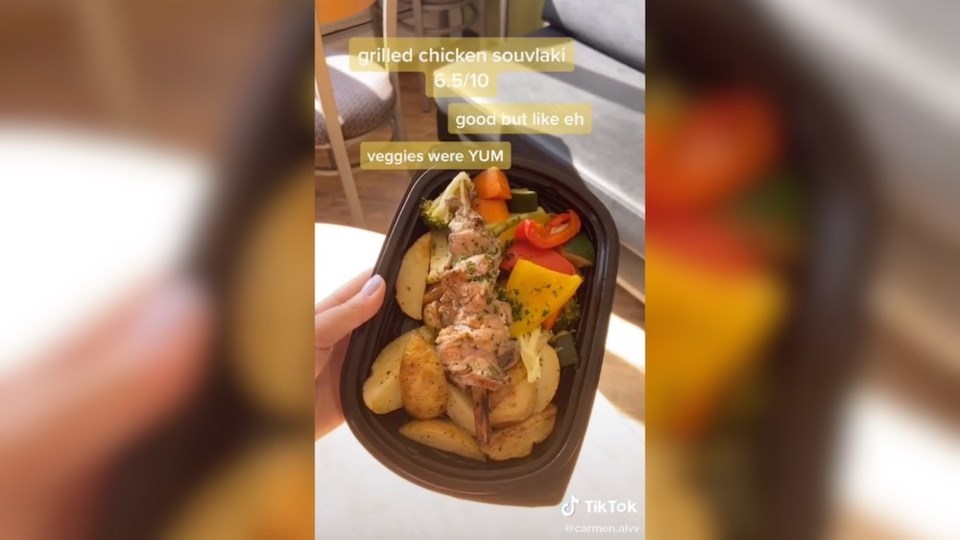 A University of British Columbia student is taking to TikTok with hilarious videos giving the Internet an inside look at what quarantine conditions are like in the school's self-isolation units.  Carmen Alvarez has been staying in UBC's Walter Gage residence since she returned to campus from the Dominican Republic eight days ago.  Like all travellers entering Canada from abroad, international students returning to school this year are required to undergo the government-regulated two-week quarantine that's been mandated in an effort to halt the spread of COVID-19. As such, UBC is offering complimentary on-campus 14-day self-isolation packages—which include accommodation and meals—for all students travelling to the university from another country. Each one-bedroom unit comes with a single bed, an unequipped kitchen and a private washroom.  There are currently around 150 students quarantining in self-isolation units as part of the complimentary package, a spokesperson for UBC confirmed in an email Friday.

The meals that Alvarez has been documenting on TikTok (alongside some laughter-inducing commentary) are dropped off at her door daily. Students in UBC's self-isolation units receive three meals per day, and have the option of carnivore, pescatarian or vegetarian packages. As UBC explains in its quarantine guide for students, the daily deliveries sourced from Scholar's Catering are dropped off between 3 p.m. and 5 p.m. and include dinner for that day, in addition to breakfast and lunch for the next day. All meals are delivered cold in an effort to give students the flexibility to eat whenever they want, while enhancing food safety. Alvarez said she finds that schedule "way more convenient." She added, "I get to pick when I have dinner, I get to pick when I have lunch, I get to pick when I have breakfast, instead of having to wait for someone to drop it off three times a day."

The meals themselves look pretty tasty overall, and aren't exactly breaking any Vancouver stereotypes. They appear to include tons of fresh fruit, veggies and granola, delivered alongside breakfast items like matcha chia pudding, sandwiches like Thai chicken banh mi and desserts like Nanaimo bars. They also tend to include copious amounts of flavoured sparkling water, as Alvarez's TikTok fans will know. (Head over to UBC's website to take a peek at the full menu).  Self-isolated students can also take advantage of food delivery apps like Skip the Dishes, Uber Eats, Door Dash, Fantuan, or Yogi’s Kitchen.

As for Alvarez's videos ranking the daily meal deliveries, the third-year Sauder School of Business student said she was inspired to start making them after similar videos posted to the content sharing platform by New York University students (showcasing some pretty sad-looking meals, if we're being honest) went viral last month.

"It would be people being like, 'Things in my NYU quarantine vegan meal that just make sense,' and it would be, like, a steak and cheese salad,'" Alvarez explained. "I just thought it was really funny."  She continued, "When I got [back to UBC] I was like, you know what, might as well entertain myself with something. So I just started recording the TikToks and just rating the food that I was eating, not only to entertain myself but also to show other people that were going to come to the quarantine units, or that were thinking about it, what to expect."

As one TikTok user astutely pointed out in a comment, "UBC is absolutely FLEXING on the students in the states right now."

Alvarez's videos have racked up an impressive amount of traction, with her first meal-ranking post pulling in upwards of 23 thousand views. To date, she's posted 23 videos while in quarantine.

Her videos have also sparked some pretty entertaining debates in the comments section—"not enjoying this unnecessary hate towards sparking water," wrote one follower, to which Alvarez replied, "i have a billion bottles pls help."  If you're wondering, the peach-flavoured Aha water Alvarez received with Day 7 dinner earned a score of -1/10, posted alongside a simple and concise comment that read, "ENOUGH." Comparatively, the side of festive quinoa scored a 10/10 and apparently "SLAPS."

Explained Alvarez, "I'm not the biggest fan of sparkling water to begin with—like I'll have it, there's no problem—but they send two bottles with every meal. "I'm getting sparkling water every single day ... by now my fridge is just overflowing with soda water, and I don't know what to do with it."

UBC's self-isolation units are better than she expected, Alvarez admitted. "I am definitely not very fond of the idea of having to be in an apartment by myself for 14 days, but it's definitely made me more comfortable in the sense that they provide you with people to check in on you to see how you are doing; if you need any help or resources—they let people drop you off anything you need, they'll just leave it at the front desk and [staff] can bring it up to me," she said. Alvarez's apartment also comes outfitted with a balcony, "so that you can actually get some fresh air. Even though Vancouver's not so fresh right now," she added with a laugh.  "I know the university itself had to adapt to this whole situation in a rush," she acknowledged. "With the timeliness and everything, they've done really well at providing us with housing and food and everything—they have pulled through in that sense." Even still, Alvarez said she's looking forward to finishing up the mandatory quarantine and moving back into her apartment. But after two weeks of UBC meal deliveries, what will be her first post-quarantine indulgence?  "Definitely my first stop is going to be Ramen Danbo," Alvarez said without hesitating.