"After examining the totality of the circumstances, the use of force... by the officers on scene was deemed reasonable and the investigation has been concluded," said Cpl. Michael McLaughlin.
Jun 27, 2019 3:56 PM By: Gary Mckenna 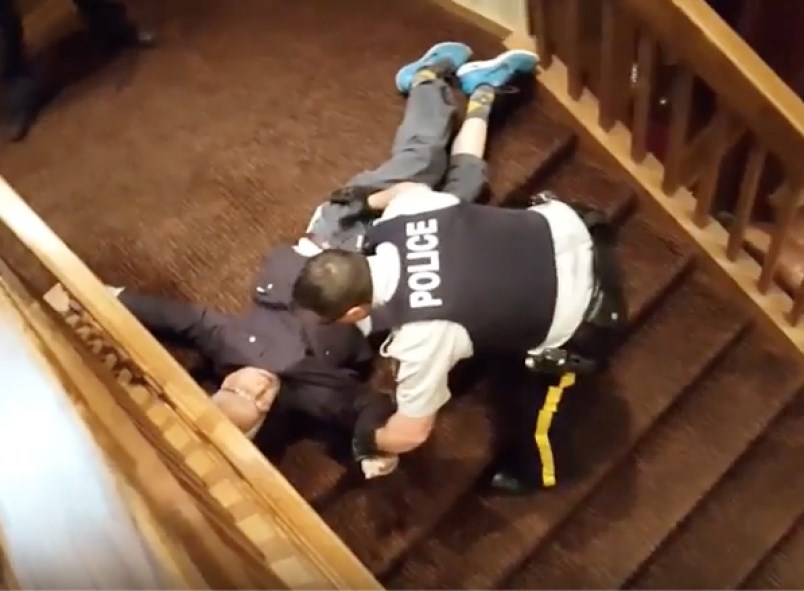 A video showing Coquitlam RCMP officers dragging a man down a flight of stairs during an arrest in 2016 was posted to YouTube, garnering 170,000 views.

The Coquitlam RCMP officers involved in a 2016 arrest of two senior citizens that was caught on video and posted to YouTube will not be disciplined following an internal code of conduct investigation.

The footage showed one officer dragging a man down a flight of stairs at the Best Western on North Road while another Mountie attempted to cuff a woman as a child screamed and held on to her leg.

Thursday, Cpl. Michael McLaughlin told The Tri-City News that the use of force was found to be appropriate.

"After examining the totality of the circumstances, the use of force... by the officers on scene was deemed reasonable and the investigation has been concluded," he said in an email. "Given that conclusion, there was no discipline with regards to this matter."

Police were called to the hotel at around 10:30 p.m. Oct. 27, 2016 after receiving reports that fights were breaking out at a strata annual general meeting being held there.

The meeting ended when the officers showed up but the elderly man and woman refused to leave, according to a statement made by Supt. Sean  Maloney at the time of the incident. After their arrest, the pair were assessed by BC Ambulance paramedics.

Footage of the incident, which was taken by Victor Kim, was picked up by several media outlets, garnering hundreds of thousands of views.

After the eight-minute clip was posted, the BC RCMP asked the New Westminster Police Department to conduct an external investigation, which was concluded in January with no criminal charges being laid.