VIDEO: This is how easy it is for bears to climb a tall fence in Coquitlam

A fence is no deterrent to this bear family in Coquitlam, video shows
May 31, 2021 2:06 PM By: Diane Strandberg 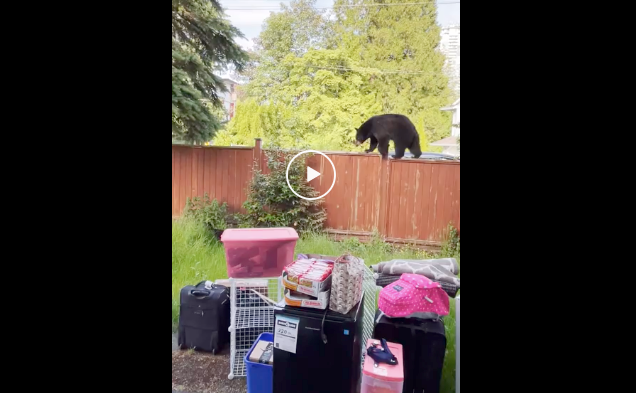 A mother bear and two cubs visit a back yard in Coquitlam - via a very sturdy fence.Reddit

It's bruin season in the Tri-Cities and that means bear families are out and about, including one family eager to explore a Coquitlam neighbourhood.

A video posted on Reddit shows a mother bear and two cubs climbing and playing around a tall fence.

The video shows the mother bear walking the fence top — despite her large bulk — while the cubs easily scale the fence.

The images come as officials in Coquitlam, Port Coquitlam and Port Moody are reminding people to secure their attractants and not to leave garbage out for the bruins.

Residents are reminded to report all wildlife conflicts to the BC Conservation Officer hotline at 1-877-952-7277.

Last week, Port Coquitlam council vowed to get tougher on those who leave food out for bears while, in New Westminster, a yearling bear — reportedly from Coquitlam — made its way to the Royal City via railway tracks.

It was eventually tranquilized and relocated.

Meanwhile, on Sunday, Westwood Plateau Golf and Country Club golfers were greeted by a lounging bear on the Coquitlam links.

And in Port Coquitlam, a photographer shot a great photo of a bear family in a tree.