Soroptimist International of the Tri-Cities host event to raise awareness about equity and to stop violence against women and girls
Apr 13, 2017 1:38 PM By: Diane Strandberg 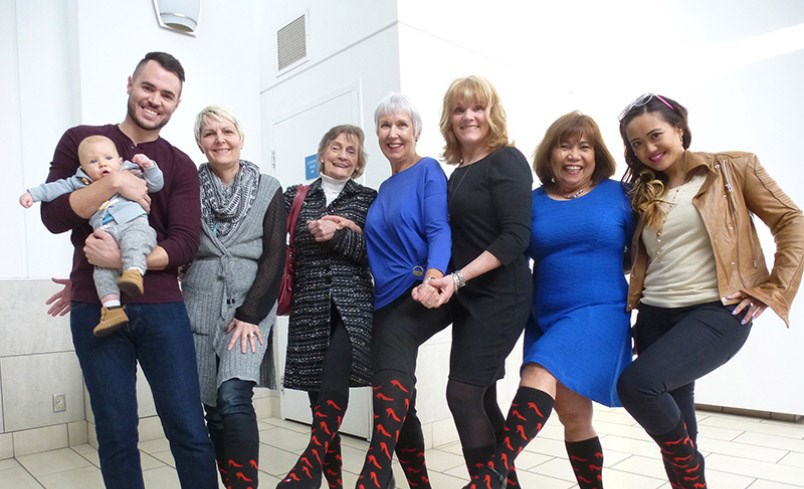 Members of Soroptimist International of the Tri-Cities are inviting the community to take part in the Walk A Mile in Her Shoes in their special knee socks. The April 21 event, taking place at noon starting at Coquitlam Centre, is to raise awareness about violence against women and the need for greater gender equity in politics, pay and the corporate boardroom. Among the participants will be Port Coquitlam Coun. Brad West and Coquitlam Coun. Bonita Zarrillo, who is one of the organizersdiane strandberg

Soroptimist International of the Tri-Cities says the work isn't over in promoting gender equality and ending violence against women and girls, and to make their point, they are walking a mile in heels and colourful knee socks.

Next Friday, the group is inviting women and men to join them in the lighthearted Walk A Mile in Her Shoes event to raise awareness about these serious issues.

"We need men men to get into the conversation," said Coquitlam Coun. Bonita Zarrillo, who is helping organize the event.

Already, several businesses are expected to join in, making the point that men and women must be united to stop gender violence and ensure young women have an equal opportunity to get jobs with good pay.
Port Coquitlam Coun. Brad West said his mother inspired him to take an interest in equity issues because she was a single mom raising children in tough times.

"These aren't just women's issues, they are men's issues, too," said West, who will be joining the Soroptimists on the walk, wearing women's flats in size 11 1/2 to make the point in a fun — if possibly painful — way.

He is the proud father of a baby boy and he and his wife plan to have more children. If he has a daughter, he wants to make sure she is treated fairly, noting that there is only female PoCo councillor. Parity in the political arena would be a great place to start, he said.

"We have work to do," West acknowledged.

Zarrillo agreed, saying that the United Nations has called Canada to account for failing to meet gender equity goals, citing a figure that women need to occupy 30% of positions in an organization in order for their voices to be heard.

Among the things the group would like to see in the Tri-Cities are pay equity, fairness in employment advancement, harassment-free workplaces and safety for women who walk or take transit.