What is the Confucius Institute and why is it in Coquitlam?

Critics of the Chinese government-funded program say it promotes propaganda, SD43 says it's a program run outside of school hours for people who want to learn about Chinese language and culture
Apr 19, 2019 7:06 AM By: Diane Strandberg 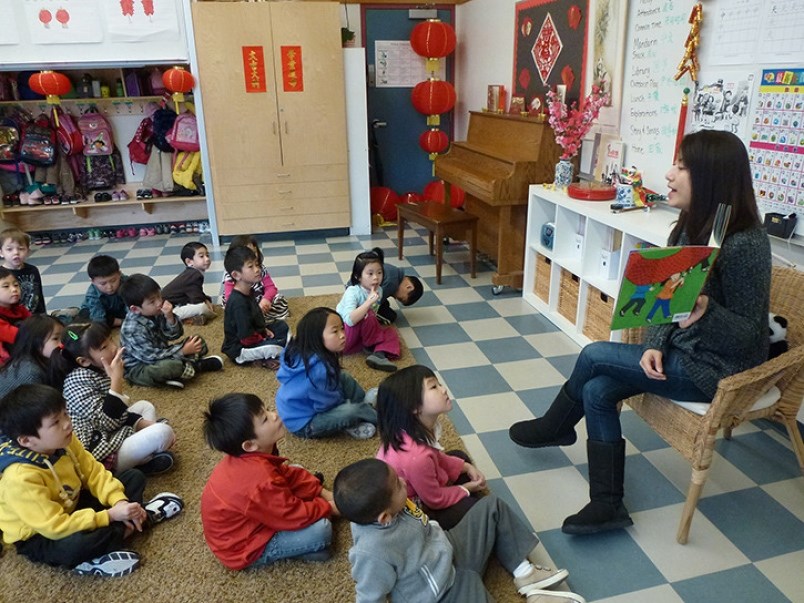 School District 43 has had a Confucius Classroom for 10 years, which provides funds for after school and weekend cultural language programs and materials for the Mandarin bilingual program, shown here in a Tri-City News file photo.

As China flexes its muscles on the world stage, even challenging Canadian extradition laws, critics have been raising concerns about Confucius Institutes at colleges and schools and how they may be promoting Chinese political aims.

Some Canadian school districts are even cutting ties with the Chinese government-funded Confucius Institutes with New Brunswick ending Chinese-funded language and cultural programs in schools and Toronto school district balking at establishing them when parents protested.

SD43 has benefited greatly from the program — from teacher exchanges, trustee trips to China, and books and materials for school-based Mandarin bilingual programs, amounting to thousands of dollars a year, not to mention support for about 800 students to attend after-school and weekend language and cultural programs, although students also pay a $200 fee.

SD43 gets approximately $32,000 for four trustees to go to China, a trip that this year has been postponed but not cancelled.

But what are Confucius Institutes, and how do they fit into SD43’s school system?

In 2009, School District 43 held an opening ceremony for the establishment of a “Confucius Classroom,” where students, including non-Chinese speakers, could learn Mandarin and Chinese culture.

The opening day celebration, captured in a website write-up and photos, shows the importance of the Confucius program in building connections between China and SD43, with officials from the Chinese consulate and schools attending the formal event, along with trustees, international education officials and then- superintendent Tom Grant.

At the time, SD43 was not alone in signing on to the non-profit educational organization created by China’s Hanban, or education ministry. Thousands of other schools, colleges and universities around the world have done so, too, according to an interactive map posted to Reddit recently.

SD43’s own website says there are over 450 Confucius Institutes world-wide in over 100 countries on six continents.

In Coquitlam, the Confucius Classroom is located at 1100 Winslow Ave., with programs for ages four to adult, and there are programs for non-Chinese speakers, as well.

Superintendent Patricia Gartland, who did not want to be interviewed about the Confucius Institute because of concerns doing so would lead to more confusion rather than clarity, recently posted an explanation of the program on the SD43 website.

Countering critics, who say China is using the Confucius Institute to portray a positive image, and will go so far as to restrict speech on controversial topics such as Tibet, the SD43 write-up says the primary goal is to strengthen multicultural relationships with other countries and to promote cultural and education exchanges.

There are no political topics, teachers are local and classes are open to anyone.

Some may argue China is getting good publicity for $400,000 or more it may have spent in SD43, including trustee trips, in the last 10 years since the program started in February, 2009.

China provides the largest contingent of the approximately 1,600 to 2,000 students who will pay $16,500 to go to school here, up $1,500 for 2019/‘2020, and with SD43 dependent on funds from the international education program, which contributes 12% to the bottom line, it’s also vulnerable to geopolitical trends and changes.

Although foreign student numbers are growing, not decreasing, there is a danger that program funding could be hit if a large country, such as China, decided to send its students elsewhere. A similar occurrence was noted when Saudi Arabia pulled students from Canadian universities in retaliation for a foreign affairs spat with the Canadian government.

Such a risk was noted in the district’s budget, which pointed out that SD43 finances are “heavily reliant” on international education revenues and summer programs, at the same time that it is vulnerable to “recent geopolitical events and escalating economic variables.”

For those looking for a beachhead by the People’s Republic of China into SD43 schools, there may be little to find in the language and cultural programs taking place outside of regular school, and so far, no one has made a complaint about Chinese propaganda being foisted on students, as was the case in New Brunswick.

However, it could be said that SD43 needs the good will of the Confucius Institute and the Chinese education mandarins who run it as much as the Chinese government needs to be seen as a benign foreign actor in the eyes of a majority of Canadians.