What’s next for the Canucks and the NHL after Thursday’s protest? 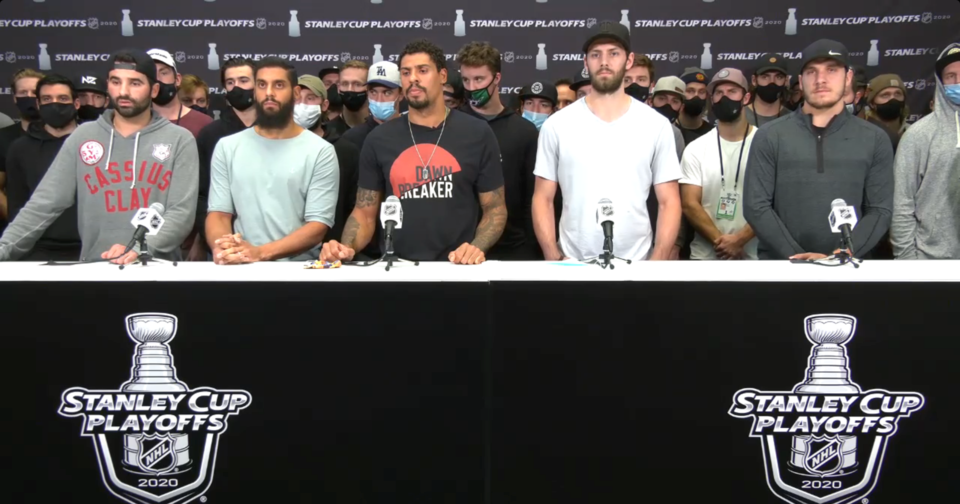 Nazem Kadri, Pierre-Edouard Bellemare, Ryan Reaves, Jason Dickinson, and Bo Horvat stand with other players of the NHL's Western Conference to speak about Thursday's postponement of the Stanley Cup playoffs.NHL

Several months ago, the sports world was put on pause in response to a global pandemic. This week, the sports world once again came screeching to a halt, as protests in the wake of the police shooting of Jacob Blake spread across basketball, baseball, soccer, and, finally, hockey.

On Thursday, team captain Bo Horvat and the Vancouver Canucks stood in solidarity with the rest of the Western Conference to speak to the media as a united front, speaking out against racism.

The question now is what’s next?

In certain practical ways, it’s an easy question to answer. What’s next for the Canucks is Game 3 against the Vegas Golden Knights, a game rescheduled to Saturday at 6:45, with Game 4 the next day at 7:30. The compressed schedule necessitated by the two-day pause will be wearing, but manageable.

That’s the quick answer, and it’s easy to see how this momentary pause could be put out of the minds of the players and fans in favour of discussing line matchups, the power play, and scoring chances. The purpose behind the pause, however, calls for deeper conversations and, beyond that, real action.

One of the most striking moments of Thursday’s events was when Ryan Reaves talked about how he was afraid he might be alone. Reaves was up all night debating whether he would walk out on his team and refuse to play Thursday’s game in protest. He thought he might be the only one or one of just a few.

“In my head, I was thinking about how there were only a couple players of colour in the bubble,” said Reaves. “How is this going to look? Am I just going to walk out to support my black community? Am I going to be the one or two or three out of the eight teams doing it? Am I not going to support and just go play and act like everything is fine? I was back and forth, but in my head I felt like we shouldn't play. I felt like this was something that we needed to support.”

On Thursday, he discovered that he wasn’t alone at all. He received text messages from Kevin Shattenkirk of the Tampa Bay Lightning and from Bo Horvat of the Vancouver Canucks, saying they wanted to talk.

“I get outside [the Canucks] locker room and every one of those guys thought we should sit for two days and said they'd stand behind it,” said Reaves. “It was a big exhale for me because I felt like I was alone in it, but it was the exact opposite.”

It clearly illustrates the importance of being an ally. Black hockey players and other people of colour within the sport have led the way, from J.T. Brown raising his fist during the national anthem in protest three years ago with the Tampa Bay Lightning to Matt Dumba’s impassioned speech to open the postseason this year.

More often than not, players like Brown and Dumba have taken these actions alone, with their fellow hockey players and teams standing behind them to allow them to speak out, but not standing with them. When Dumba raised his fist for every game during the anthems in the Minnesota Wild’s qualifying round, no one raised their fists with him.

In 2017, in the wake of Colin Kaepernick and other athletes protesting, Brown talked about the unique and uncomfortable situation for him and other Black athletes.

“We were the only athletes continually asked if we would protest,” said Brown. “It also put us all in a tough spot. We were forced to pick a side. Am I Black, or am I a hockey player? We were all damned if we did and damned if we didn’t.”

That’s the importance of white athletes joining with their fellow Black athletes.

“I feel like it's a strong message and a very powerful message if a sport like hockey, which is predominantly white, can stand up and say I don't know what you've been through and never will, but I see what's going on in this country and I don't think it is right,” said Reaves.

Thursday’s protest has already accomplished a couple goals. First, it shows the Black athletes in the NHL that they are no longer alone in this moment. Second, it forced hockey fans that might have tried to ignore the protests across the United States to talk about Black Lives Matter and police brutality.

That can’t, however, be the end of it.

While NHL players are not going to end racism or police brutality on their own, there are concrete steps they and the NHL can take to address the racism and intolerance that still exists in the hockey world, whether hidden in corners or ingrained deep in hockey culture.

Supporting the Hockey Diversity Alliance in their efforts to eliminate systemic racism in hockey will be key. That includes pledging financial support to their programs and social justice initiatives, but also showing more firm support for the Black players within the NHL and other leagues.

Too often, the NHL waters down social justice initiatives, such as this summer’s #WeSkateFor campaign, which eschewed the more direct message of “Black Lives Matter” for a more general approach.

“Seriously, one of the #WeSkateFor things in a presentation was '#WeSkateFor These Moments.' I'm not even kidding,” said Evander Kane last month, one of the co-heads of the Hockey Diversity Alliance. “It's disappointing the lack of interest we're facing in addressing systemic racism in our sport."

This week’s protests have forced the NHL to more directly address the concerns of the Hockey Diversity Alliance — their press release announcing the postponement of games notably said the names of Jacob Blake, George Floyd, and Breonna Taylor, while their press release following the death of Floyd did not mention him by name, instead stating a more generic message opposed to “racism, hatred, bigotry, and violence.”

It can’t be enough for the NHL and NHL players, including the Canucks, to stand with Reaves and the league’s other people of colour just once and then move on. They need to find a way to continue being part of the conversation.

That means continuing to listen and learn from those who have experienced racism both within hockey and outside of hockey. It means taking the time to educate themselves on the history of systemic racism in the United States and Canada. It means talking publicly about what they’ve learned, what they still need to learn, and the causes they support. It means speaking up against racism if and when it occurs in the locker room and on the ice.

It can also mean taking an uncomfortable look at just how white the world of hockey is, particularly when it comes to people in positions of power.

"There's room there for coaches, managers, linesmen, referees," said Willie O'Ree, the first Black player in NHL history, earlier this year. The truth is that while there are few Black players in the NHL, there are even fewer people of colour among NHL officials, coaching staffs, and front offices.

Chris Watkins, who writes for hockey analytics site Hockey Graphs, spoke to TheScore’s John Matisz about how this week’s protests are a step in the right direction, but how the NHL always seems to be a step behind and never leading the way when it comes to social issues:

“A deeper investment in people of colour — in front offices, the coaching ranks, at the league office — is needed just for the NHL to catch up. I'll put it this way: If a team's power play is struggling, it's not going to bring in someone who has never dealt with a power play or put together a successful offense. You need someone who has that ingrained experience.”

In other words, if the Canucks and the NHL want to adequately address the issues of systemic racism, they need to have people who have experienced racism in positions where they can make decisions to address it. The truth is that the vast majority of people in the world of hockey have never experienced racism and wouldn’t even know where to start to uproot it.

It’s not going to be easy, but as hockey players are well aware, nothing worth doing comes easily.

You want mustard with that? Food carts could be coming to Port Moody's sidewalks
Apr 9, 2021 3:37 PM