Where is B.C.'s COVID contact-tracing technology?

PM signalled two months ago B.C. would be among first provinces to deploy the national app
Aug 14, 2020 3:02 PM By: Tyler Orton 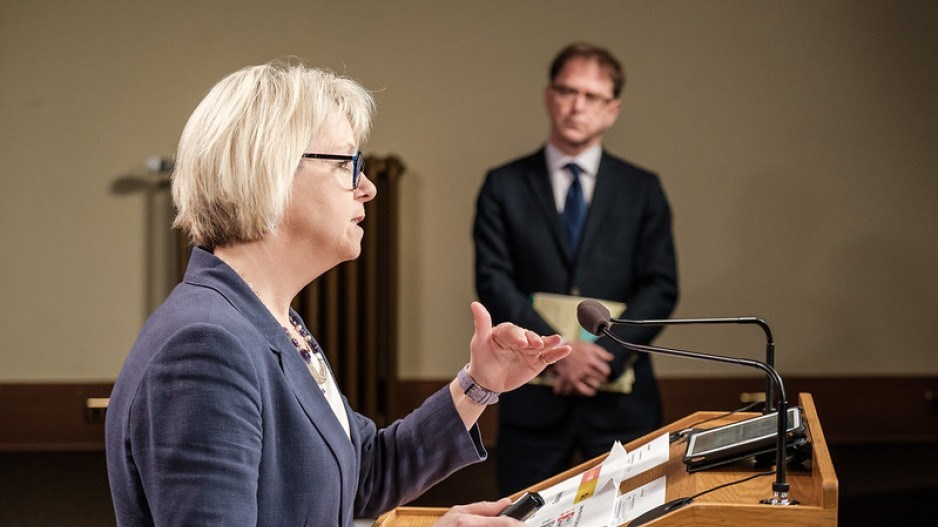 B.C. provincial health officer Bonnie Henry says there is no timeline for deploying the national COVID Alert app in B.C.Government of B.C.

With great enthusiasm – at least with as much as one can muster during a COVID-19 update from Ottawa – Prime Minister Justin Trudeau revealed in late June a voluntary contact-tracing app would be delivered to Canadians imminently.

The plan was for the national app to roll out first in Ontario, while the prime minister signalled B.C. would follow soon after as an early partner in the venture.

Two months after that announcement, the national COVID Alert app has not been deployed beyond Ontario’s borders, although Canadians are free to download it regardless of their location (CBC reports it’s been downloaded 1.9 million times).

And instead of next hitting the West Coast as originally appeared to be the case, the Atlantic provinces will be the next to adopt it, while Alberta has confirmed it’s shifting from its own app to the national app.

She addressed a House of Commons standing committee May 21 to brief parliamentarians on the Vancouver company’s own contact-tracing app, Pandimik.

The federal government ultimately opted for an app developed in collaboration between the Canadian Digital Service, the Government of Ontario, BlackBerry Ltd. and Shopify Inc.

But Arjomandi told BIV she made it clear to those in the federal government her company’s contact-tracing would be ready to roll out much sooner, hence her surprise by how long it took for Ontario to launch the app.

She said the made-in-B.C. app has been enjoying quick adoption by enterprise clients eager to get employees back into workplace quickly while keeping their data secure and private.

But Arjomandi said privacy concerns remain over the COVID Alert app, such as issues in which users find themselves redirected from the app to a web portal to submit personal data.

B.C. provincial health officer Bonnie Henry told reporters she’s not sure when the app will make its debut on the West Coast while it still undergoes some “tweaking” in Ontario.

“We are supportive of having a single app in Canada,” she said, describing contact tracing as the “bread and butter” of public health.

“We’ve been working with them on how we can tailor it to be a tool that supports the work that we’re doing in contact tracing.”

But Henry said individuals on the ground – those that can talk to potential COVID-19 patients about their risks and steps they need to take next – remain the best resources for contact tracing.

“There’s no electronic magic bullet that can take that away,” she said.

“We’re hopeful it will be something we’ll be able to use to supplement and support our contact tracing.”

Earlier this week the province announced it was hiring 500 temporary contact tracers to work within individual health regions.

If a user tests positive for COVID-19, a health-care professional helps the patient anonymously upload their status on the COVID Alert app. The app will then alert other users who’ve been in close contact with the COVID-19-positive patient.

Trudeau said the federal government consulted with the Office of the Privacy Commissioner of Canada, and has insisted the app itself would not share any identifiers such as a phone number or address.

Instead, the app generates a randomized code used for alerts.

The code is stored in what the prime minister described as a secure national database.

The Pandimik app used by enterprise clients tracks and logs the proximity of individuals’ devices to one another.

If an app user discovers they’ve tested positive for COVID-19, they’re able to alert other app users with whom they’ve shared close contact via an alert that would appear on those other devices.

Mimik does not report the location of users to third parties and it does not retain users’ personal information.

Instead, the company uses edge-computing technology to ensure all data remains on the users’ respective devices.

Arjomandi said adoption, anonymity and adaptability will be the key to any contact-tracing app’s success in Canada, adding that a national app’s effectiveness will likely require at least half the general public to download it.

The app will also need to be able to interact with multiple health care partners across the provinces while maintaining data security, she said.

“I don’t have a crystal ball,” Arjomandi said, referring to a potential successful deployment in B.C.

“Time will tell but they [federal government] already made indications – it’s the end of August and we don’t have it anywhere else. It’s Ontario only.”

1965
‘What are they waiting for?’ asks Coquitlam parent worried about long wait for school isolation letter
1531
New garden centre hopes to take root in Port Moody
1526
Parent says Port Moody minor hockey not giving a full account of its COVID cases
1446
Every Canadian household to get free, pre-paid postcard
1114
Dentists, midwives and more approved to assist in B.C. vaccination clinics