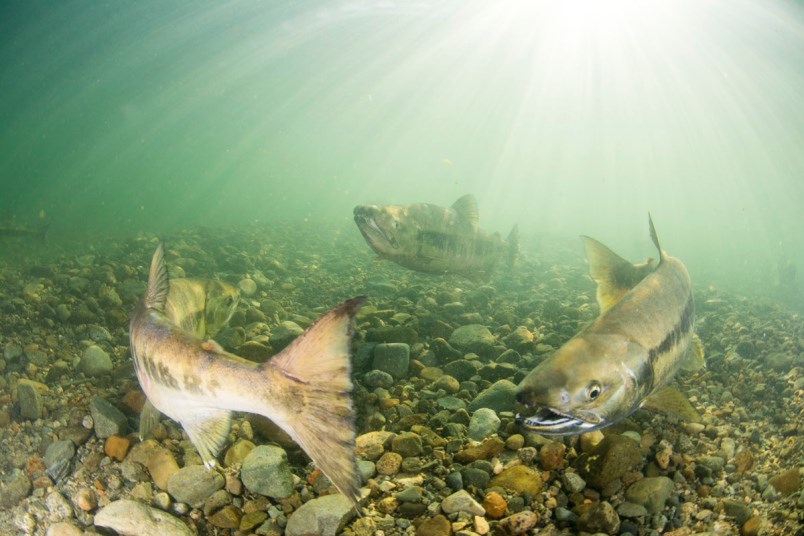 Salmon in the Fraser RiverAPRIL BENCZE

That’s according to a handful of environmental groups, an open letter from six SFU scientists, and a response from the BC Federation of Fly Fishers.

“They use the word wild in it but it’s anything but,” said Craig Orr, a Coquitlam-based ecologist and consultant with the Kwikwetlem First Nation. “This isn’t going to help the Coquitlam watershed. “

Of the 13 recommendations the report made to the provincial government this week, much of the controversy hinges on expanding hatchery production to increase wild salmon populations.

In an open letter, the scientists from SFU write that “the science is clear — hatcheries have repeatedly show [sic.] to seriously harm wild populations at both broad and local scales,” adding that chum and pink salmon ranching in Alaska has already negatively impacted the survival of wild sockeye in the Salish Sea.

“When you build a hatchery, people are like, ‘Oh, great. There's a hatchery. We can go fishing,’” Hill told The Tri-City News. “But there's still the wild fish there that are getting hammered.”

Blowing money on hatcheries while continuing to destroy salmon habitat doesn’t make any sense, both for the environment and for public finances, Hill added.

But he also noted hatcheries can be the only option to bring back a species from extinction, such as in the case of the Kwikwetlem Nation’s hatchery project trying to restore sockeye to the Coquitlam River.

Both environmental groups and the BC Federation of Fly Fishers said it’s no surprise the Wild Salmon Advisory Council’s report was biased, noting the council is heavily dominated by representatives from the commercial and charter fishing industry.

“We have world-leading academic scientists on fisheries and salmon here in B.C. and they didn't have any of those people on their council,” Hill said.

The public consultation process was also deeply flawed in favour of coastal communities who support commercial harvesting, according to the detractors, who noted the council largely avoided input from communities along inland waterways.

The report is the latest in a long line of recommendations from both federal and provincial governments. Despite its supposed flaws, critics are hopeful the provincial government will act on the parts of the report that fall directly under its jurisdiction, particularly when it comes to habitat restoration and indigenous reconciliation.

“What we think is unique is the government seems ready to kick into gear and put money behind implementing these recommendations,” said Hill.

One watershed that could massively benefit from large-scale habitat restoration is the stretch of rivers and streams running from the Lower Fraser down into the Tri-Cities where 1,500 kilometres of salmon-bearing waterways sit behind flood control structures.

“Those are under provincial jurisdiction and they need to be upgraded anyways due to increased seasonal flooding due to climate change,” said Hill.

The provincial government said it is reviewing the council's report as part of its plan to restore wild salmon stocks.

— With files from the Canadian Press