Keven McTaggart doesn’t read story books to his son, Nathan, at bedtime. Instead, they conjure wild, fantastical scenarios and craft them into stories from their imaginations.
Oct 12, 2017 8:00 PM By: Mario Bartel 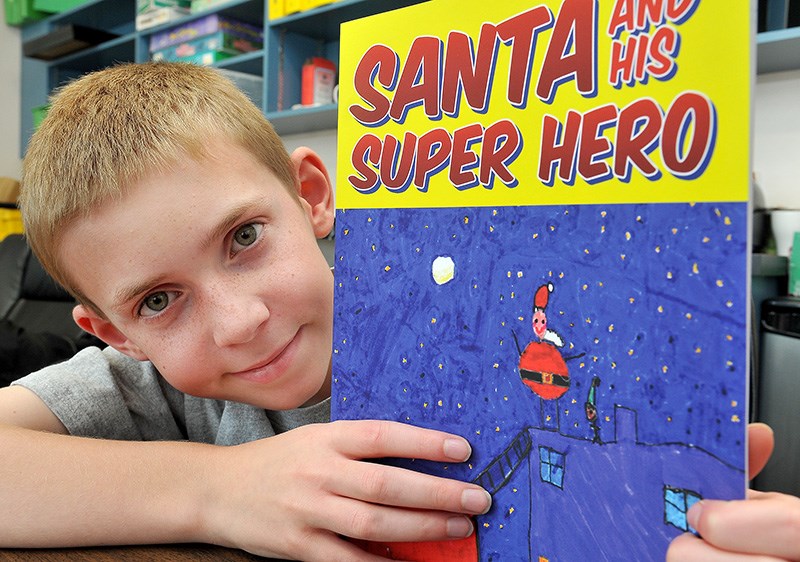 MARIO BARTEL/THE TRI-CITY NEWS Nathan McTaggart, 11, found his inspiration for his first children's book from the imaginary scenarios he conjured with his dad, Keven, instead of reading from traditional storybooks.

Keven McTaggart doesn’t read story books to his son, Nathan, at bedtime. Instead, they conjure wild, fantastical scenarios and craft them into stories from their imaginations.

Now, one of those scenarios has come to life as a new children’s book that is being launched today (Friday) when Nathan drops the ceremonial face-off before the Coquitlam Express play the Langley Rivermen at the Poirier Sports and Leisure Centre.

Accompanying Nathan to centre ice will be one of the characters in his first book, Santa Claus and His Super Hero.

Jolly old Saint Nick is taking some time from his busy pre-Christmas preparations to celebrate his timely extrication from a chimney with the first responders like firefighters and paramedics who rescued him.

That also happens to be the premise behind Nathan’s book.

Nathan, who’s in Grade 6 at Como Lake middle school in Coquitlam, said the idea came to him when he was just three-and-a-half years-old after his family made a donation at a Food Bank Friday event put on during the holiday season by a local television station. A bunch of firefighters and their truck were there and Nathan was so impressed he wanted to include them into his nightly story session with his dad; and it being Christmas, he had to work Santa in as well, he said.

“I thought about Santa getting stuck in a chimney.”

Every night Nathan and his dad continued to flesh out the story, adding characters like Zippy the head elf and a heroic firefighter named, naturally, Nathan.

“Firefighters are my super heroes,” the young author said.

By the time they played their story out, Nathan decided it was so awesome it needed to be shared.

But, being only three-and-a-half, his dad said, “you couldn’t type and your grammar was really bad.”

So Keven sat down at the computer and started to put words to their imaginings. It took a while.

Then came the search for illustrations to give those words a visual dimension.

Neither McTaggart could draw and they couldn’t find a commercial illustrator they were happy with.

It turns out the solution was all around Nathan, who was by now in school — has Grade 3-4 classmates at Harbour View elementary.

As part of a class assignment, Keven supplied a manuscript the students could use as inspiration for some pre-Christmas artwork.

The McTaggart’s like the results so much, they decided to end their search for an illustrator.

While the book is self-published, Nathan said he didn’t become an author to get rich. Instead he wants to help kids who’ve had their own too-close-for-comfort brush with first responders by donating proceeds from his book to the BC Professional Firefighter’s Burn Fund.

To help get the word out, Nathan has visited fire halls across the region and even while on family holidays in Mexico, New York City and Toronto.

As to whether Nathan would someday like to become his own super hero, he’s not so sure.

“I’m just afraid of heights and I’m not sure if it will work out,” he said.

• To learn more about Santa and His Super Hero, including where it can be purchased, go to www.santaandhisuperhero.ca