Throwing axes isn't just for lumberjacks anymore. Competitive axe throwing is now in Port Coquitlam and afficionados are sharpening their skills.
Mar 26, 2021 11:47 AM By: Mario Bartel 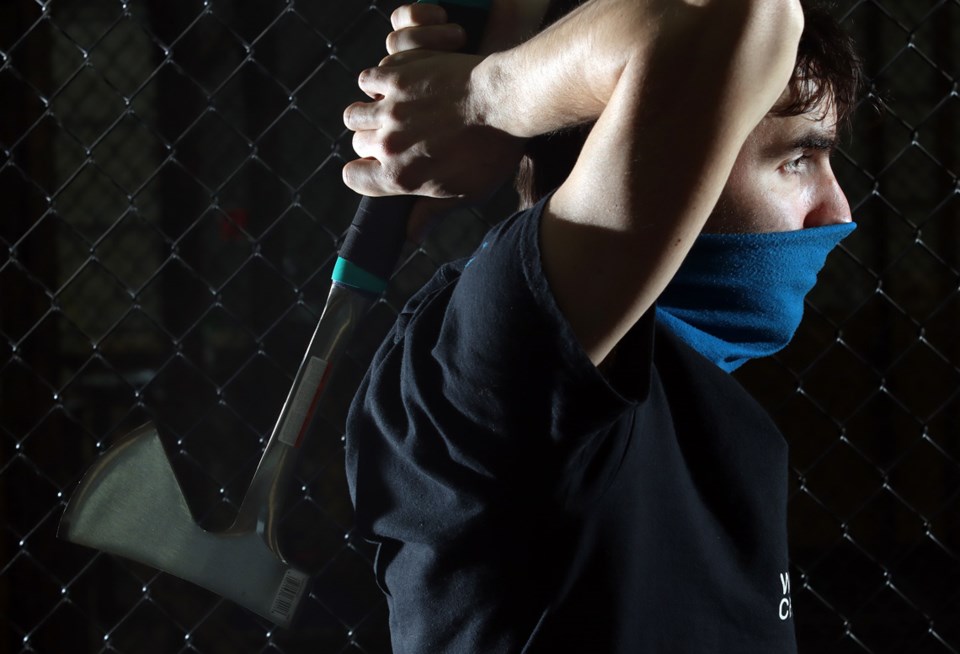 Jeff den Hartog winds up to throw an axe at Urban Axe Throwing in Port Coquitilam, the first such establishment in the Tri-Cities.MARIO BARTEL/THE TRI-CITY NEWS

Jeff den Hartog isn’t a lumberjack, and he’s okay with that.

Because any day of the week den Hartog is able to fulfill his wood chopping inclinations as the proprietor of Urban Axe Throwing, the Tri-Cities’ first arena for wannabe-woodsman or anyone else who thinks darts is for sissies.

Ironically, the sport of axe throwing isn’t dissimilar to its pub-based cousin; competitors in both stand at a line a measured distance from a target from which they must hurl a sharp implement as close as they can to the bullseye in the centre of a target of concentric circles. But while a featherweight dart can be propelled with a flick of the wrist, a steel-handled axe can weigh up to a pound-and-a-half and often requires both arms cocked right to the back of the head to muster the momentum to embed it into a softwood target 12 feet away.

When the sharpened steel blade sinks into those boards, though, den Hartog said the satisfaction is like no other.

“You get to experience the visceral feeling of annihilating things,” he said. “It really works out your frustrations.”

Axe throwing has been around as long as man has been felling trees. After all, what else is there to do between shifts deep in the woods?

Long a component of competitive timbersports that also includes log rolling, tree-climbing and sawing, axe throwing became a sport unto itself about 15 years ago with the formation of the Backyard Axe Throwing League.

In 2016, one of the BATL’s founders helped create the National Axe Throwing Federation to standardize international rules and oversee more than 4,500 members in 55 cities and seven countries. A year later, the World Axe Throwing League was created to unify the sport across 19 countries and sanction competitions like open championships in the United States, Canada, and Europe, as well as the World axe throwing championship that is held every December.

Den Hartog said while most visitors to his establishment are there for the social experience of trying a new sport while celebrating a birthday, anniversary, stag, stagette or even a first date, membership in competitive leagues is growing. This summer, Urban Axe Throwing is scheduled to host the Pacific North American championship that — should public health regulations allow — attracts competitors from across the Pacific Northwest.

Den Hartog, who discovered the sport when he and his wife celebrated a joint bachelor and bachelorette party at another axe throwing venue then opened Urban Axe in Dec., 2019, said the act of throwing an axe itself is very primal. But doing it accurately is all about technique.

He said a successful throw will see the axe rotate once before it hits the target, ideally at about a 45-degree angle to properly embed the blade into the wood rather than bounce it off and down to the floor.

Den Hartog said while brawn can be an advantage, anyone of any size and stature can throw an axe well if they practise enough.

“Practice is the secret to success.”

Den Hartog said a good thrower locks their wrists, instead relying on their arms and shoulders to project the axe toward the target. Some throwers use both arms, others use just one. Competitive axes come in different sizes and weights. Some are even constructed with handles made of lightweight carbon fibre to put all the heft into the head.

“There’s nothing stopping you from getting an axe custom forged,” he said.

Den Hartog said a thrower has to learn how to tune out all the distractions around them, giving their total concentration to the task at hand.