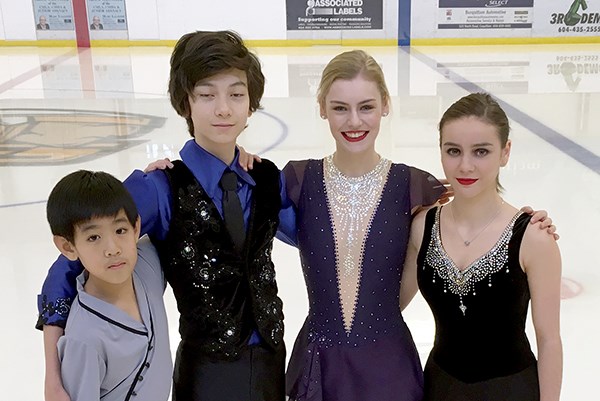 Alex Roueche, Jonathan Wu, Larkyn Austman and Alexandra Canning competed in the 2017 Skate Canada Challenge in Pierrefonds, Que., last week. Austman, third from left, scored a fourth-place finish at the Quebec event and is now expected to compete for a spot on Canada’s national team at an event in Ottawa in the new year.Gary McKenna Photo

The 18-year-old Coquitlam Skating Club member posted a fourth place showing, picking up a score of 49.99 in her short program and 105.07 in her long program for a total of 155.06 in the senior women category.

Her performance at the national competition, which had more than 500 competitors, came a week after she grabbed silver at the provincials in Kelowna, missing gold by 0.79 points.

“Everything has been really good,” she said. “I have been training really well and everything has gone really smoothly.”

Austman is still eyeing her chance to make Canada’s national team and, thanks to her fourth-place showing at the Skate Canada Challenge, is expected to compete at nationals in Ottawa in the new year.

That could be a stepping stone to her ultimate goal of donning the red and white when the Winter Games are held in Beijing in 2022.

“I want to go to the Olympics but I am not sure if that is an option anymore,” she said. “I would love for that to happen. If it can, I would shoot for the 2022 Olympics.”

Austman was not the only Coquitlam Skating Club member competing at last week’s national challenge in Quebec.

Alexandra Canning, who was a pewter medalist during the provincials, had a 40.92 in her short program and a 59.71 in her full program for a 100.63 point finish in the junior women category.

There were several other Coquitlam Skating Club members that had strong showings at the provincials in Kelowna but did not qualify for the national Skate Challenge event.

In pre-juvenile female under-11, Rebecca Mah won a pewter medal, while in the pre-juvenile men category Illya Bilous was the champion.