If the Western Lacrosse Association is able to begin its season on schedule in June, most of its star players should be immediately available after the professional National Lacrosse League announced Wednesday it won't return to play until the fall because of COVID-19 restrictions.
Feb 4, 2021 9:39 AM By: Mario Bartel 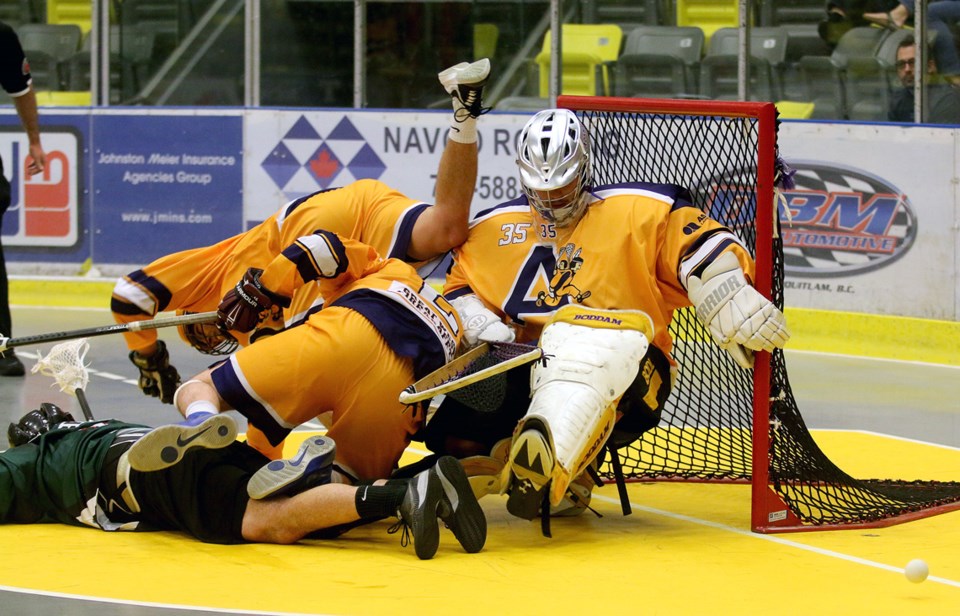 Former Coquitlam Jr. Adanacs star goalkeeper, Christian Del Bianco, should be available to play with the Sr. Adanacs of the Western Lacrosse Association this spring after the National Lacrosse League, where he plays for the Calgary Roughnecks, announced Wednesday it would not return to play until the fall because of COVID-19 public health restrictions. The WLA has not yet determined how or whether its season will be able to proceed beginning in June.MARIO BARTEL/TRI-CITY NEWS FILE PHOTO

The commissioner of the Western Lacrosse Association is breathing a little easier after the National Lacrosse League announced Wednesday it won’t return to play until the fall.

The U.S.-based professional league normally operates through the winter but had been planning to hold off its 2020-’21 season until April because of the COVID-19 pandemic.

That could have had implications for the WLA, as many of its star players, like Coquitlam Adanacs’ goalkeeper Christian Del Bianco, also toil in the NLL.

Paul Dal Monte said the pro league’s planned April start could have meant greater overlap with the WLA’s traditional opening of its season in June — usually the two leagues' schedules only clash for a week or two as the NLL finishes up its playoffs.

Although, whether the WLA will be able to operate under business as usual this spring and summer has yet to be determined.

Dal Monte told the Tri-City News the league is considering several possible scenarios depending on public health restrictions that might still be in place, as well as return to play guidelines from the B.C. Lacrosse Association

“We have the benefit of time,” Dal Monte said. “We’re still several months away.”

One possibility could be a hybrid schedule that gathers teams at a central venue like the Langley Events Centre: the facility offers multiple playing surfaces and enough dressing rooms so each team could have its own.

Dal Monte said even if provincial health orders ease and teams can play at their home arena, each community could have its own layers of safety protocols teams would have to consider.

Dal Monte said after a year off because of the pandemic, getting the WLA back on the floor and in the public consciousness is imperative.

“We understand the value of being able to play in one form or another,” Dal Monte said, adding players are itching to get back at it.

“We want to be able to do our part to support the game.”

Dal Monte said playing games in empty arenas, like some big time pro leagues like the NHL and NBA have been doing, isn’t really viable for the WLA, as teams rely on box office revenue to help cover their annual expenses, that he estimated can approach $100,000.

Even if public health restrictions ease to the point some amount of spectators could be allowed into arenas, Dal Monte conceded it will be a challenge to convince people they can attend safely.

“Across the sporting landscape, there will be a period of time where fans will have some reluctance, he said.

In a statement on the NLL’s website, commissioner Nick Sakiewicz, said it had considered playing a bubble season in Canada, where there’s franchises in Vancouver, Calgary, Saskatoon, Toronto and Halifax, but tighter travel and quarantine restrictions for crossing the border created “logistical challenges.”