Coquitlam Express and their BC Hockey League competition are continuing their junior hockey post-season march in a video game by Burnaby’s EA
Mar 26, 2020 4:34 PM By: Mario Bartel 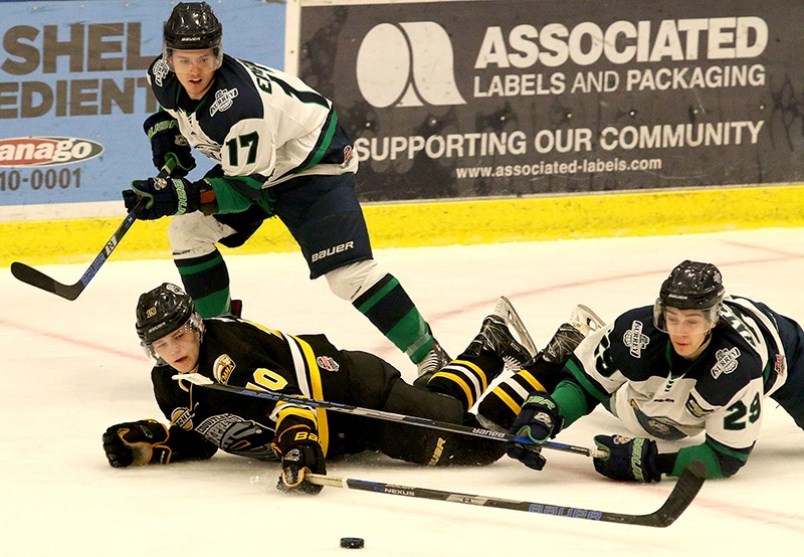 Before the BCHL playoffs were cancelled by the COVID-19 pandemic, the Coquitlam Express were set to face the Surrey Eagles for the Lower Mainland division title. The series, and the rest of the league's post-season, are now being contested virtually using the EA Sports NHL 2020 video game.TRI-CITY NEWS FILE PHOTO

The COVID-19 pandemic may have ended the championship hopes of the BC Hockey League’s Coquitlam Express but the team’s playoff fight is going on.

Thursday, the BCHL launched a simulation — created in the EA Sports video game NHL2020 — of the rest of the league’s playoff series that were cancelled March 13, just as the second round of the post-season was set to begin.

A player representative from each of the eight teams remaining in the playoff tourney is handling the game controls in a head-to-head match-up against their second-round opponent, with a two-minute highlight reel — complete with commentary by the teams’ broadcasters — posted to the league website.

“We were looking for a way to keep fans engaged during this unfortunate downtime,” BCHL commissioner Chris Hebb said in a press release. “We’ve tried to make it a fun and unique BCHL experience for everyone to enjoy.”

The initiative sprang from a project by the former director of communications for the Express, Jacob Lazare. Bored and restless after the team dispatched the Langley Rivermen from the playoffs’ first round in four straight games and were awaiting the start of the second round, he put together a simulation of a series between Coquitlam and the Surrey Eagles, who took seven games to defeat the Chilliwack Chiefs.

Lazare said he was able to use the video game’s various customization features to recreate the rosters of the two rivals, ranking each player’s attributes and tendencies, like their skating ability, speed, puck-handling skills and physicality, on a scale from zero to 99.

“You can go through and create a player that mimics the actual players realistically,” Lazare told The Tri-City News, adding he can set a dazzling skater like Massimo Rizzo to weave around defenders and a skilled stickman like defender Drew Cooper to repel onrushing forwards one-on-one.

While his own knowledge of the Express gleaned from running the team’s video camera during games helped him build Coquitlam’s digital doppelgänger, Lazare reached out to contacts at the Eagles to inform his recreations of Surrey’s players.

The effort was an amusing distraction that got some attention on social media.

But when the actual series, and the rest of the season, was scrubbed because of the pandemic, the league reached out to spin his effort into a virtual march to the Fred Page Cup championship.

Lazare said it takes him a couple of hours to handicap all the players for each team, and additional time to create facsimiles of the uniforms and match headshots with the game’s graphics.

“It’s just to make it so fans can recognize their teams’ players,” he said of the laborious attention to detail.

Lazare lamented, however, that limitations in the game don’t allow him to recreate the cozy confines of BCHL arenas, so the virtual players are battling in front of likely the biggest crowds they’ve ever experienced, even if they’re comprised entirely of pixels.

Lazare said having actual players contest the rest of the playoffs, albeit with the help of the game’s artificial intelligence, adds an extra wrinkle of unpredictability, which is part of the fun.

“Somebody is able to win it for their team,” he said. “There can be upsets involved.”

The first series, contested between Express goalie Joe Howe and Hassan Akl of the Surrey Eagles, is already decided, with the three remaining series to be posted in the coming days. The third round of the playoff simulation commences next week.