B.C. youth sports leagues could resume, with restrictions, in the coming months

Dr. Bonnie Henry says physical activity a priority but precautions need to be taken when athletes get back in action
Apr 21, 2020 4:44 PM By: Andy Prest 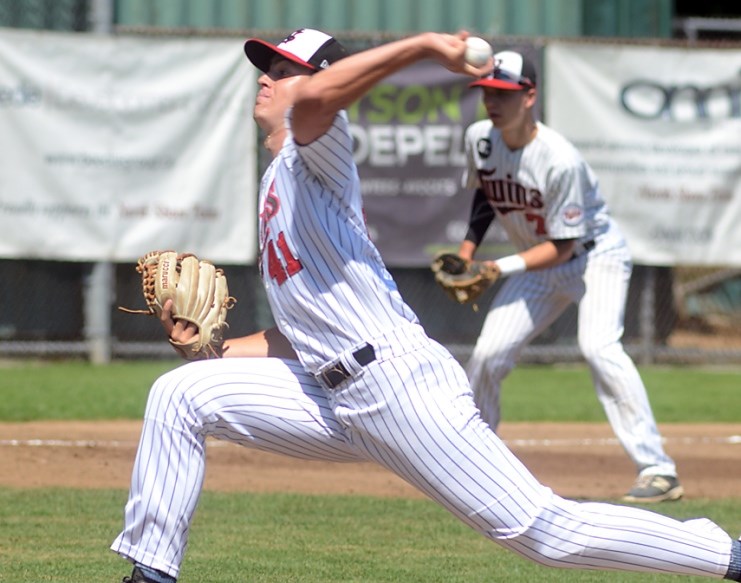 Jed DeCooman fires a pitch for the North Shore Twins during last year's BCPBL playoffs. The Twins and other sports teams around the province are wondering when they will be able to get back on the field given the global COVID-19 restrictions. photo Paul McGrath, North Shore News

British Columbia’s provincial health officer today opened the door to the possibility of youth sports leagues resuming play in the coming months, with the caveat that restrictions will need to be put in place to reduce the risk of transmitting the COVID-19 virus.

In her daily media update today Dr. Bonnie Henry did not give a specific timeline for when sports teams will be able to hit the field again. She did, however, say that getting people – young people in particular – back outside and taking part in physical activity was an important concern as the province begins loosening some restrictions in the coming months.

“I think it’s really important, and we know that it is less risky outside than inside,” she said. “We know how important it is to have physical exercise, particularly for young people, over the summer months and into the fall. I think there are ways – it can be done.”

She cautioned, however, that sporting events will not take the same format they did before the pandemic, at least for the upcoming season.

“We need to look at how do we do it safely so that we’re not sharing water bottles, sharing food … we’re respecting those safe distances but still being able to carry on,” said Henry. “We are also thinking about the numbers of people that are involved, and we may have to limit that for a period – for this summer, for the coming year, so that we don’t have large crowds watching games for example.”

Henry said she will be able to give parameters for how sporting activities should be carried out when leagues do swing back into action, but added organizers will need to be heavily involved in making sure proper precautions are in place when practices and games fire up again.

“I need the people who are involved in setting up those types of team sports to think about how we can do it, in this new normal, for now, recognizing that it’s not going to be forever, but it is going to be for this next season,” she said. “We need to find ways to do it that allow, especially young people, to get out there and be physically active and be together.”

Last week Henry said that B.C. may consider starting to relax some restrictions put in to combat COVID-19 starting in May, but warned the lifting of those measures will be partial and gradual, and life in B.C. won’t go back to normal anytime soon. Henry said the lifting of pandemic measures might start with the resumption of some cancelled elective surgeries as well some students potentially going back to school – but that could involve only partial school days or partial classes at a time.

The NBA suspended play on March 11 after a player tested positive for COVID-19, and within a couple of days nearly every league across North America, professional and amateur alike, had suspended or cancelled their seasons.