Senior girls soccer in the Fraser Valley North is not unlike a game of Survivor. Persevere and do what it takes in league competition and your team will be steeled for a run through the Fraser Valley championships and on to provincials.
Mario Bartel
Apr 10, 2019 12:36 PM
Previous Next
1 / 1
Expand
Previous Next

Senior girls soccer in the Fraser Valley North is not unlike a game of Survivor.

Persevere and do what it takes in league competition and your team will be steeled for a run through the Fraser Valley championships and on to provincials. That was the formula for success followed by the Centennial Centaurs last season, en route to their first provincial championship in 20 years, and propelled the Heritage Woods Kodiaks to a top ranking the season prior, before they faltered in the Fraser Valleys.

But the tough-as-nails level of competition means it can also be a long season for those teams developing young players stepping into vacancies left by graduating seniors.

Here's our preview of six of the teams. The Gleneagle Talons did not reply in time for our deadline.

As defending provincial champions, the Centennial Centaurs senior girls soccer team has a target on its back. That’s just the way coach Larry Moro likes it.

“We’ve tried to embrace and challenge ourselves with the idea of defending the title,” Moro said. “The biggest challenge will be bringing our ‘A’ game each time we step on the field as we know our opponents will be gunning to knock us off.”

The team also has some unfinished business, Moro said. While dramatically winning the provincials in overtime was a pinnacle to last season, the Centaurs didn’t win their own league. They want to correct that.

“We have set our goals for the season and the girls know what they are and what we aim to achieve,” Moro said.

Attaining those goals will be eased by the return of 16 players from last year’s championship squad, and only three of those are seniors.

One is Julia Kostecki, who returns to Centennial after playing in the Vancouver Whitecaps’ residency program for a couple of years. Moro said she’ll capably fill the void left in the midfield by the graduation of captain Danae Robillard, who’s now at Simon Fraser University.

Grade 12 striker Kiara Buono will also be expected to reprise her scoring touch that resulted in a team-leading 16 goals last season.

She’ll be set up by Grade 11 midfielder Reagan Mackenzie who, Moro expects, will orchestrate the Centaurs’ attack, while fellow juniors Emily Smith, Jessa Vance and Lucia Zecca anchor the defence. Sophomores Sophia Ferreira and Avery Tulloch will also be expected to take another step in their development after exceptional seasons as Grade 9s.

Still, Moro remains wary of unexpected factors, like injuries or school commitments, that could veer his charges from their mission.

“We hope we are deep enough to balance those challenges,” he said.

The Riverside Rapids were the only splash on Centennial’s otherwise dry run to a provincial championship last season. A 1-0 win over the Centaurs earlier in the season gave them the tiebreaker to finish atop the Fraser Valley North after both teams finished tied in the standings.

The Rapids squeaked into the provincials as the last qualifier out of the Fraser Valley, then placed 11th at provincials.

Rapids’ coach Kenny Jamieson said his young team that lost eight players to graduation will look to experienced defenders like Amy Vegh, Natalie Gane, Katelyn Walker, Taya Schubert and Sophie Irvine for leadership. Not that his Grade 11 players are totally adrift, as most were part of the junior team that won the Fraser Valley championship when they were in Grade 9.

“They bring a lot of soccer experience and skill to our team,” Jamieson said, adding they’ll need ever ounce of it in the competitive league.

“We are hoping our team can come together quickly,” he said. 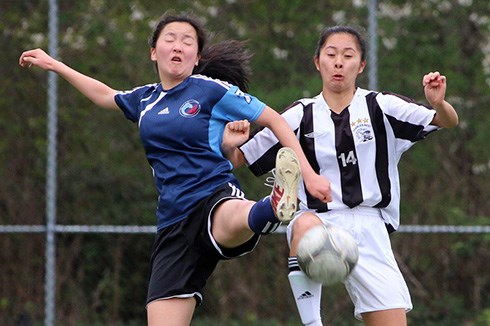 A seventh-place finish in last year’s provincials should be a good foundation for the Blue Devils to build on, said the team’s coach, Alfonso Napoletano.

Senior players like Valerie Silva, Jenna Mele, Tara Kong, Chatel Da Silva and Marina Verones got a taste of what it takes to succeed at the highest level, which he hopes will filter down to the team’s younger players.

“Leadership is very important for the success of any team,” Napoletano said, adding he’s been very pleased with the chemistry he saw developing already during practice and pre-season matches.

He said his charges believe they can compete with any team.

The coach of the Heritage Woods Kodiaks is bullish on her bears.

Julie French said this year’s team will be notable for its work ethic and dedication.

Leading the way in those departments will be Grade 12 midfielder Charlotte Hall, who’s been part of the school’s soccer program since she was in Grade 9.

“She is always willing to help out with anything needed, including goal,” French said.

Other seniors French will look to show the way for the team’s younger players include midfielder Mya Mills, who relies on speed and timing to create space, as well as Madeline Counsell and Hayley Anderson, who are strong and fast with a knack for scoring.

Other up-and-comes noted by French include Grade 10 center midfielder Tianna Spyridis, who can mix it up physically and distribute the ball to her teammates, as well as Katelyn McCaskill in the defensive end.

The Terry Fox Ravens are a young team built around four core veterans.

“We’re going to rely on our seniors on the field to help role model and guide the players,” said Ravens’ coach Jennifer Dalyrimple.

Hayley Perri is a Grade 12 forward Dalyrimple said has great awareness of what’s happening on the field that she’s able to convert to creative playmaking.

The team’s three other seniors are all defenders, which bodes well for the confidence and development of the Ravens’ junior goalkeeper, Mackenzie Frizzell: Ashley Passaglia is mentally tough and determined who, Dalyrimple said, always brings a total effort to games and practices; Tahlaela Marks, whose aggressive and gritty style of play provides the team’s backbone; and Mikalea Ladron, whose calm demeanour settles her teammates and gives her the opportunity to headman the ball into the offensive zone.

Dalyrimple said she’s also excited about the potential of one of her new Grade 9 players, Taylor Matthews, whose quickness and creativity matches her well against older players with more experience.

Dalyrimple said the Ravens’ youth means the team will have to play an up-tempo game, especially as they transition from defence to offence.

What the Port Moody Blues lack in experience, they’ll make up with fun and enthusiasm.

Blues’ coach Edward Roberts said the graduation of more than half the team’s starters means pluck and character will go a long way to determining their success.

The major absence from the pitch will be Ziyana Samanani, who’s moved on to Rice University in Houston, Tex. Her void as a leader on and off the field will be hard to fill, Roberts conceded.

But he’s encouraged by the early-season emergence of Sophia Gaskell, who, Roberts said, can shoot the ball with power and precision.

“She will be looking to find the back of the net,” he said.

As well, Hannah Oldewening now has a year of experience in her boots after she joined the senior team as a Grade 9 player last season and played every match.

Still, Roberts said he’s under no illusion about the Blues’ chances.

“The challenge is the significant disparity between teams like Centennial and Charles Best who could easily be in the provincial final,” he said.