The BC Hockey League has been sidelined since Nov. 19. The clock is ticking on whether it can have any kind of season at all says Coquitlam Express general manager Tali Campbell.
Mar 1, 2021 9:23 PM By: Mario Bartel 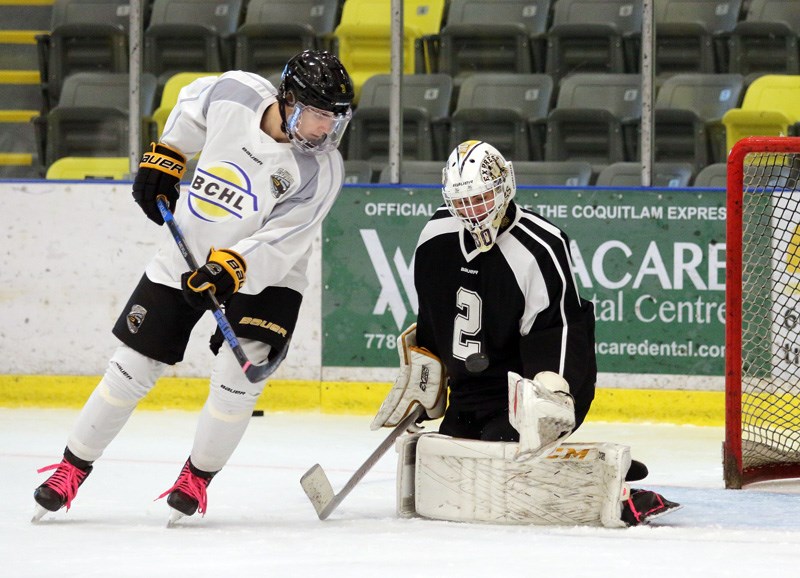 The Coquitlam Express, as well as the rest of the teams in the BC Hockey League, have been restricted to just practising since November.MARIO BARTEL/THE TRI-CITY NEWS

The Coquitlam Express hope to know by Wednesday whether it and the rest of the BC Hockey League’s 17 teams (the U.S.-based Wenatchee Wild is on hiatus) will be able to have a season.

That’s the deadline that’s been given to provincial health officials by the league in a letter sent on Feb. 26 by commissioner Chris Hebb to British Columbia’s chief medical officer, Dr. Bonnie Henry. The letter was obtained by online news site thebreaker.news.

If the BCHL doesn’t get approval to play a shortened 20-game schedule, Hebb said the league is prepared to cancel its season outright as early as March 4.

The teenage players are also on edge, he said.

“You can only do so many drills, you can only show up at the arena so often and not have games,” Campbell told the Tri-City News. “It’s taking a toll on our players, on our coaches and our staff.”

While the Express was able to play 11 exhibition games beginning last October in a regional cohort that also included the Langley Rivermen, Surrey Eagles and Chilliwack Chiefs, teams in the Fraser and Coastal health regions were sidelined by public health orders on Nov. 8 because of rising infection rates. The rest of the league then followed suit Nov. 19 when those orders were extended to the rest of the province.

Since then teams have been running practices that emphasize individual skills because players aren’t even allowed to scrimmage under Phase 2 return to play guidelines devised by viaSport, the governing body for amateur sports in the province.

Campbell said many players are struggling, uncertain about their futures in the sport or their ability to secure scholarships to post-secondary programs.

“To them it feels like the world has fallen down on them,” he said. “They’re having a hard time grasping where to take the next step.”

Campbell said while the Express has tried to be proactive, providing resources like mental health coaching to help players weather the pause, as well as encouraging them to talk openly about their anxieties, it’s getting increasingly difficult to keep them motivated almost a year after the league was first shut down by the COVID-19 pandemic following the first round of the playoffs last March.

“It’s a year later, and they feel like their dreams are crushed.”

Campbell said some players have taken matters into their own hands, leaving their BCHL teams for opportunities in other junior leagues that have resumed playing. Recently, the Express traded goaltender Joe Howe, forward Cooper Connell and defenceman Ian Devlin to teams in the Alberta Junior Hockey League that is set to resume play March 12.

Campbell said the schools Howe and Connell have committed to for next season wanted them to get some competitive game action, while Devlin is still trying to get a post-secondary position.

“The ultimate goal is to help young athletes,” Campbell said. “When there’s opportunities for players to continue playing, it’s a no-brainer.”

Campbell added each of the players will have to go through a 14-day quarantine at their new billet homes, then pass two coronavirus tests before they can finally join their teams.

He said while the moves were made to advance the aspirations of the players, it’s tough on the teammates they’re leaving behind.

“It’s another deflation to the dressing room. Their buddies are gone.”

In a press conference on Monday, BC health minister Adrian Dix said the BCHL recently submitted a proposal for a plan to resume playing competitive games.

“Public health will be working with the BCHL on the proposal to see what we can do together,” he said, adding a plan that will get the province’s five Western Hockey League teams back on the ice as well has been “approved in principal.”

WHL teams in Alberta resumed play against each other on Feb. 26, while the five teams located in the United States will begin playing in a regional cohort beginning March 18. Teams based in Saskatchewan and Manitoba have not yet announced their plans to return to play.

Games are being played without spectators in attendance. Players and team personnel are also being tested for COVID-19 regularly. As of Feb. 26, the league said in a statement on its website, no positive results had been detected in 481 tests administered since Feb. 6.

The BCHL had similar success during its abbreviated exhibition schedule, with only one positive test of a member of the Surrey Eagles last October that resulted in the postponement of two games — one of them involving the Express. But on Feb. 18, the Prince George Spruce Kings announced it had been notified by Northern Health that several of its members had tested positive.

“The BCHL Junior A hockey league has proven they can safely and responsibly play hockey while keeping the community safe,” he wrote on the site SumOfUs community petitions, which has already gathered more than 4,000 signatures.