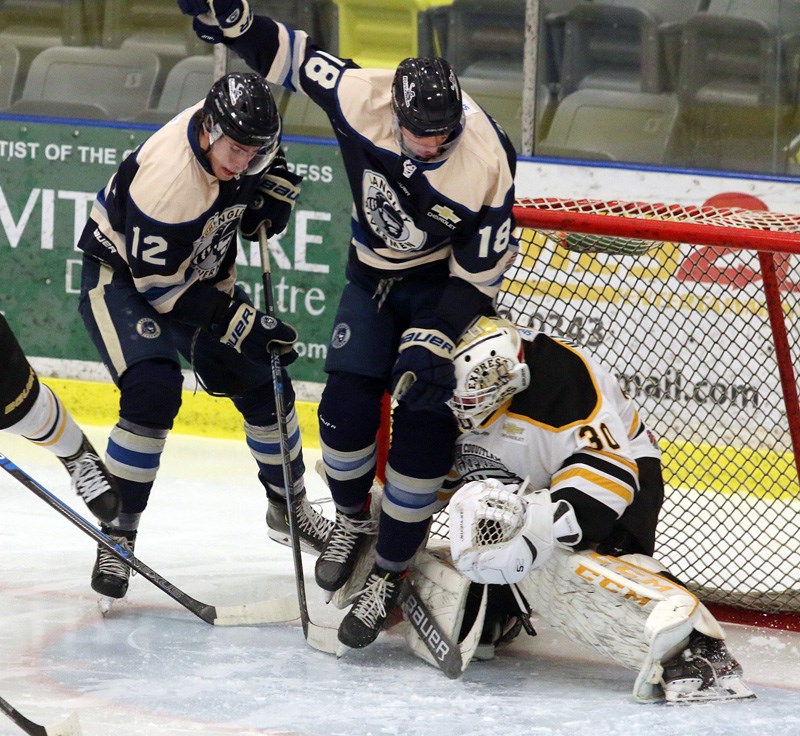 The Coquitlam Express and Langley Rivermen will play each other again this weekend, with games in Coquitlam on Friday and Langley on Saturday.

Two weeks into the BC Hockey League’s extended exhibition schedule and the Coquitlam Express and Langley Rivermen are already following a familiar pattern: blow-out win on Friday night followed the next night by an overtime squeaker.

The Express  followed up a 6-0 victory over the Langley Rivermen on Friday at the Poirier Sports and Leisure Centre by edging the Rivermen 2-1 Saturday at the George Preston Arena. The two teams opened their seasons last week with 6-1 and 6-5 wins by Coquitlam.

Jeremy Hanzel scored the winner 3:28 into the extra frame Saturday after Cooper Connell had evened the score, 1-1, with his fourth goal of the exhibition season with 1:45 left in the third period.

Friday, the Express scored three times with the man advantage — two of them by Jackson Hughes — to power their way past the Rivermen. Matthew Campbell, Greg Lapointe, Ryan Tattle and Connell added singles.

Jack Watson stopped all 22 shots he faced in Coquitlam’s net.

The Express and Rivermen will reprise their home-and-home series once again this weekend, with games in Coquitlam on Friday and Langley on Saturday.

The BCHL is confining games to small geographical cohorts because of the COVID-19 pandemic, which is also preventing fans from attending. That’s expected to continue until Dec. 1, when the league plans to embark upon a truncated regular season schedule and limited attendance by spectators if permitted by public health regulations.

The Express have a new face in its front office. Tali Campbell is the team's new vice president of team operations.

He comes to Coquitlam after six years as the general manager of the Nanaimo Clippers and director of business operations for the Alberni Valley Bulldogs.