The Coquitlam Express scored three goals in the third period to defeat the Surrey Eagles, 5-2, on Thursday.
Apr 8, 2021 10:35 PM By: Mario Bartel 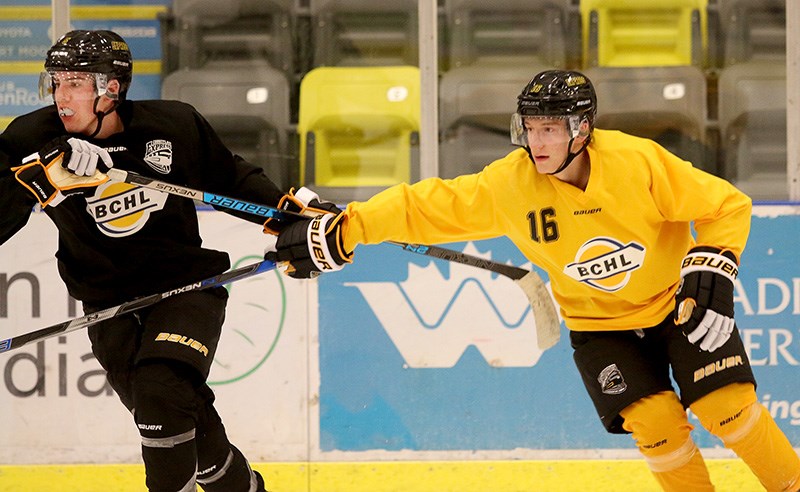 The Coquitlam Express scored three times in the third period to defeat the Surrey Eagles, 5-2, in their BC Hockey League game Thursday at the Scotia Barn in Burnaby.

The win avenges a 5-1 setback to the Eagles the Express suffered last Friday in the opening game of the league’s truncated pod season.

Goals by Alek Sukunda, Ryan Tattle — his second of the game — and Tyler Schleppe into the empty net, proved the difference after the teams were tied 2-2 at the end of the second period.

Surrey’s Buddy Johnson opened the scoring 9:29 into the first period, taking advantage of a miscue by Express defenders to tuck his second goal of the season past Coquitlam keeper Dylan Kruss, who faced 38 shots on the night.

play. It was his third goal of the season.

Schleppe put Coquitlam in front 12:18 into the frame as his floater from the point, while the Express was shorthanded, eluded Eagles' netminder Thomas Scarfone.

But less than a minute later the teams were back on even terms when Christian Fitzgerald scored on a power play.

In addition to the two-goal efforts by Tattle and Schleppe, Sukunda finished the game with two assists added to his goal. He also made a big defensive play in the third period that likely prevented a Surrey goal.

The Express play the Powell River Kings on Friday.