The Coquitlam Express returns to the ice Oct. 8. Its first home game is a week later and general manager Tali Campbell is optimistic fans will be able to attend.
Jun 9, 2021 8:05 AM By: Mario Bartel 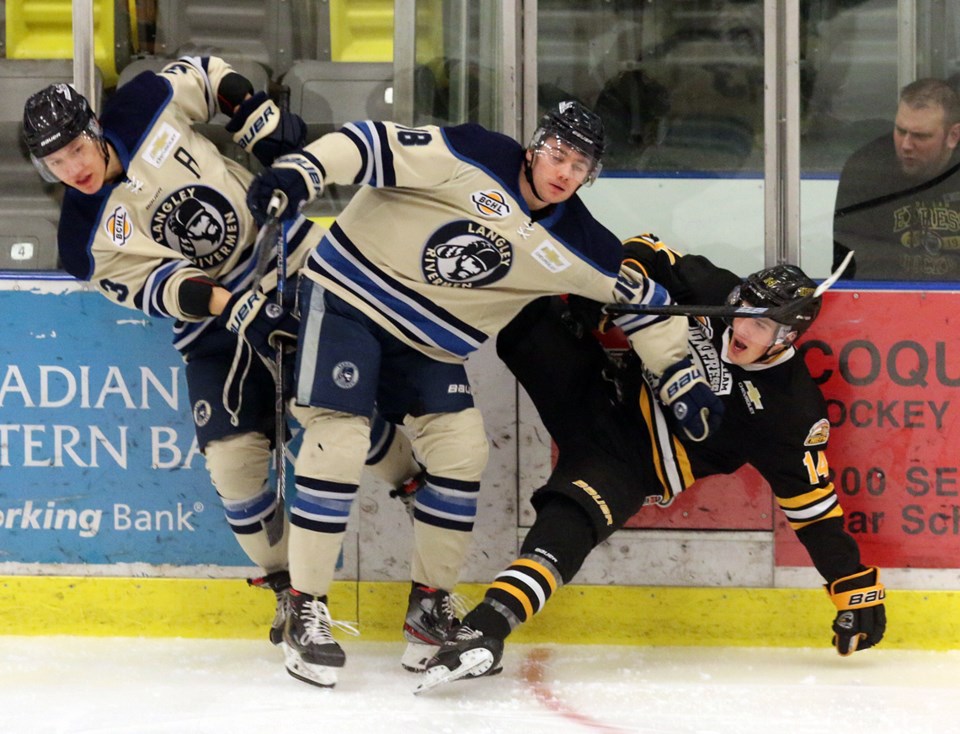 The Coquitlam Express last played in front of spectators at the Poirier Sport and Leisure Complex in March, 2020, in a playoff game against the Langley Rivermen.MARIO BARTEL/TRI-CITY NEWS FILE PHOTO

Hockey season is less than four months away.

The Coquitlam Express opens its 2021-’22 season on Friday, Oct. 8, against the Surrey Eagles in Surrey.

The BC Junior Hockey League team then travels to Chilliwack the next night to play the Chiefs.

Coquitlam’s first home game at the Poirier Sport and Leisure Complex will be Oct. 15, when the Chiefs will be the visitors.

Express general manager Tali Campbell said he’s optimistic spectators will once again be allowed in the building to cheer the young players on.

“I am hopeful… and I am excited that we will be welcoming fans back,” Campbell said in a press release.

Under British Columbia’s recently announced four-step restart plan, increased capacity at large organized gatherings, including indoor sports, could be allowed as soon as Sept. 7 if more than 70% of the adult population has received its first dose of the COVID-19 vaccine while infections and hospitalizations remain low.

The last time the Express played before hometown spectators was March 1, 2020, when it defeated the Langley Rivermen, 3-0, in the second game of their opening round playoff series. Coquitlam went on win the series in four straight games, but the rest of the playoffs were subsequently cancelled because of the growing public health crisis caused by the onset of the COVID-19 pandemic.

The team did play a five-week exhibition season that started last Oct. 2 until it was shut down in November by widening public health restrictions, but spectators were not allowed in any of the arenas.

When the BCHL was again able to convene competitive games in March, this time in five centralized pods of regional rivals, spectators were again barred. The Express hosted one of the pods, but all games had to be played at the Scotia Barn in Burnaby, as Poirier wasn’t available.

If all goes according to plan next season, Coquitlam’s 54-game regular schedule will conclude March 20, 2022, when the Express play the Nanaimo Clippers in Nanaimo. Playoffs begin five days later.

In a further sign the league is anticipating a return to normalcy for the coming season, players will again be allowed to wear half-shield visors instead of the full-face coverings that were required during this sporadic past season.

That was one of several initiatives approved recently by the BCHL’s board of governors at its annual general meeting last month. Others include:

For the BCHL’s full schedule, go to www.bchl.ca.