Coquitlam’s young baseball players that represented Canada at the Little League World Series are scheduled to return home on Thursday evening.
Aug 21, 2019 10:12 AM By: Mario Bartel 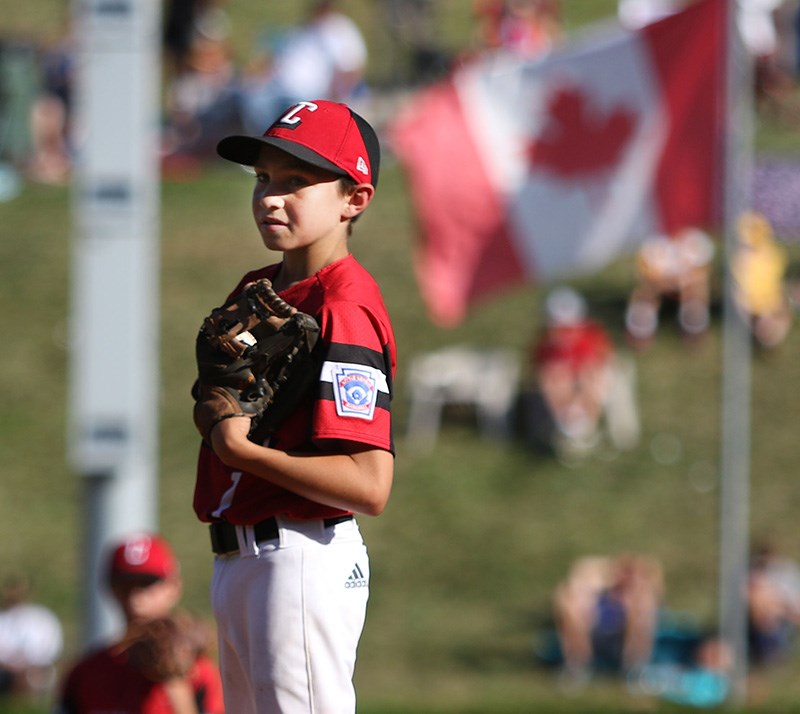 Coquitlam's Little Leaguers, like Piero Leon-Carney, were proud representatives of Canada at the Little League World Series, said one of the team's coaches, Robert Piasentin. He said the team achieved its goal of winning at least once game in the tournament of the top teams of 11- and 12-year-old baseball players from around the world.THOMAS SALUS/LITTLE LEAGUE BASEBALL AND SOFTBALL

It remains to be seen if all the memories, life experience and lessons learned will fit into their baggage allowance for the flight from Toronto to Vancouver.

One of the All-Star team’s coaches, Robert Piasentin, said the journey from provincial and Canadian championships to Williamsport, Penn., was “an experience the kids, coaches and parents will never forget.”

He said the 11- and 12-year-old boys that comprise the team matured and grew emotionally and physically “in ways that are tangible and brilliant to see.”

After losing its first game, 5-0 to Mexico, the Coquitlam kids rallied to defeat Italy 10-0 last Saturday. But they were subsequently eliminated from the 16-team international tournament by an 8-1 loss to Curacao on Monday.

Piasentin said the win over Italy was a huge moment for the young ballplayers.

“The joy of the boys’ faces after we won a game at the World Series is something we will never forget.”

Piasentin said the team showed resilience and determination in all their games against some of the best Little League players from around the world.

“Their faith in each other and strength of character to fight through all the challenges they faced was amazing,” he said.

But equally significant were the experiences the team had off the field, forging new friendships in the players’ dormitory and during post-game gatherings of athletes and their families in the Bullpen area of the Little League complex. On Tuesday, the team travelled three hours by bus to Pittsburgh to participate in on-field activities prior to a Major League Baseball game between the hometown Pirates and Washington Nationals.

Earlier in the team’s time in Williamsport, they were able to hang out with members of the Chicago Cubs prior to last Sunday’s Little League Classic between the Cubs and the Pirates. And they were part of the Grand Slam parade through the city’s downtown that launched the tournament last Wednesday.

“That was a wild experience,” Piasentin said.

Through it all, he added, the players worked hard to remain grounded and focussed.

“We are humble in our successes out there because you never know when your successes will be turned on their heads,” Piasentin said. “You treat everyone at all times with respect no matter what.”

And those are lessons the players will be able to carry with them through all their endeavours for the rest of their lives, he said.

“This is a special group.”

1955
‘What are they waiting for?’ asks Coquitlam parent worried about long wait for school isolation letter
1520
Parent says Port Moody minor hockey not giving a full account of its COVID cases
1519
New garden centre hopes to take root in Port Moody
1446
Every Canadian household to get free, pre-paid postcard
1108
Dentists, midwives and more approved to assist in B.C. vaccination clinics