Coquitlam soccer coach goes to the wall for his team

The coach of the Centennial Centaurs senior girls soccer team says his players should have fun. It's a recipe Larry Moro believes fosters success. It's also earned him a place on the Coquitlam Sports Hall of Fame's wall of fame.
Mar 19, 2021 7:29 AM By: Mario Bartel 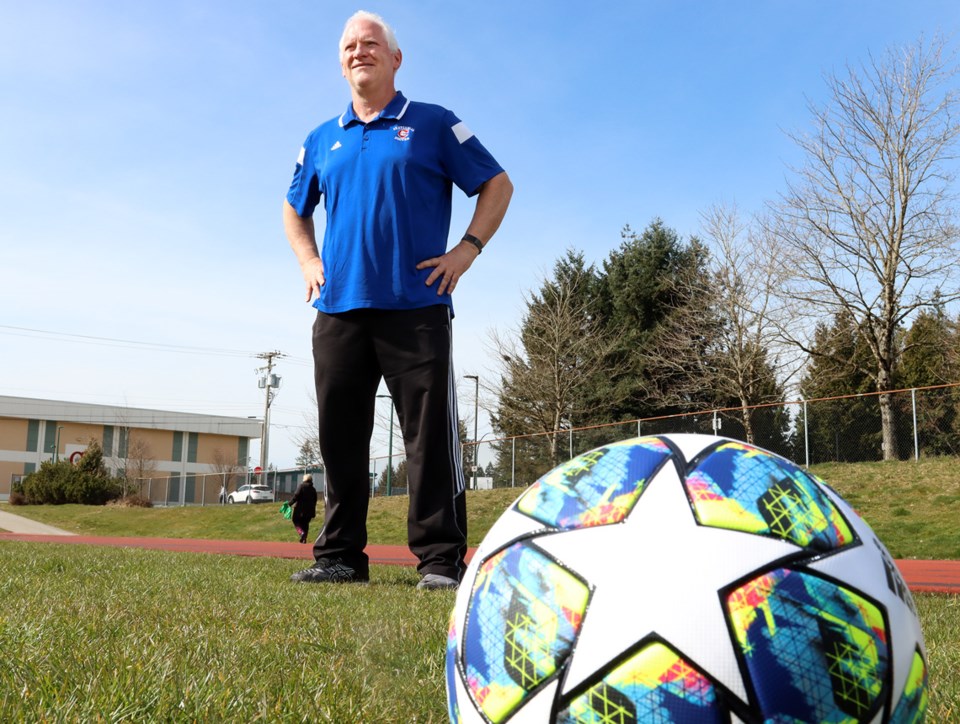 Larry Moro takes up a familiar position along the sidelines of a soccer pitch. The veteran coach of the Centennial secondary senior girls team hasn't been able to coach for a year because of the COVID-19 pandemic. He was recently honoured by being named to the Wall of Fame at the Coquitlam sports hall of fame.MARIO BARTEL/THE TRI-CITY NEWS

Larry Moro is being honoured for something he loves, in a year he can’t even do that thing.

The longtime coach of the senior girls soccer team at Centennial secondary school is getting his name added to the Wall of Fame at the Coquitlam Sports Hall of Fame.

But because of the COVID-19 pandemic, he hasn’t been on the sideline in more than 12 months. “Life is a bit more boring,” said Moro of the absence.

Coaching has been part of Moro’s life since he was 16. When he began his teaching career at Banting junior high school, he stepped up to guide the junior boys basketball and girls tennis teams. He’s also worked with young athletes in track and field and badminton.

But it was in 2000 that Moro really found his place: along the touch line for Centennial’s senior girls soccer team.

Since then, his squads have advanced to the provincial championship tournament 17 times, always finishing in the top 10, including three title banners. “I wanted to be one of the schools that goes to B.C.’s every year,” Moro said.

More importantly, though, he wanted to ensure his athletes created fond memories during their high school careers. “I’ve always believed sport has to be fun,” Moro said. “Our goal is to make it a joy to play.”

In fact, fostering that spirit of camaraderie has been a key to his success, Moro believes.

A strong club system through Coquitlam Metro-Ford provides a steady stream of talented players; his skill comes in bringing those disparate athletes together so they want to support each other, strive as a cohesive group. That, in turn, attracts more top players.

It’s a pretty simple recipe, Moro said. He just has to stay out of the way as much as he offers a guiding hand. “Kids who are self-motivated will thrive under a coach who’s supportive,” he said. “I just try to create a venue for them to show their skill.”

Moro comes by his connection to soccer naturally: His dad is the late Lou Moro, a longtime trainer for countless youth soccer and lacrosse teams, as well as Canada’s national team and the Vancouver Whitecaps from 1977 to 1984 along with the Vancouver 86ers. “Soccer has always been the number one sport,” Moro said.

But it wasn’t until 2018 Moro really appreciated just how much the sport means to him as his Centaurs won its first championship since his sideline debut 18 years prior.

After the smiles and hugs following Sophia Ferreira’s dramatic overtime goal that gave Centennial a dramatic 1-0 victory over Fleetwood Park, Moro stood back and watched his charges collect their hardware. He teared up as the date was also the 14th anniversary of the death of his mom, Virginia.

With all school sports still shut down, Moro is finding more time in his day to walk the trails near his Port Moody home. But there’s definitely a void.

“A teacher’s mentality is we like to help, we like to serve,” Moro said of his love for coaching. “I get so much out of it. I love seeing the kids succeed.”

Other inductees to the Wall of Fame are: