The Charles Best Blue Devils have already qualified for the BC High School AAA Girls soccer provincials. But the fate of the Heritage Woods Kodiaks and Centennial Centaurs still hangs in the balance.
May 16, 2017 2:49 PM By: Tri-City News 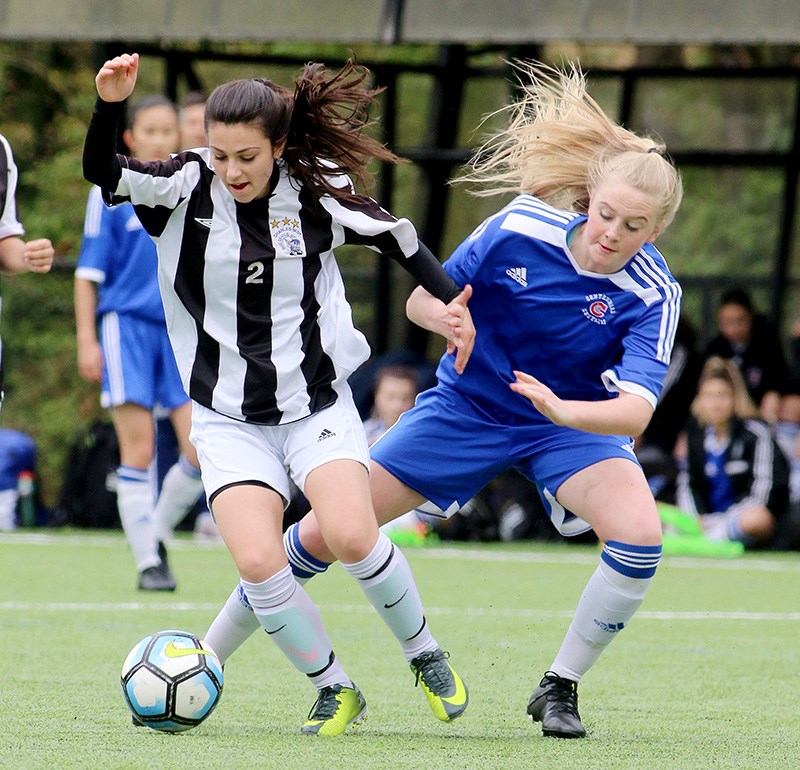 Raegan Mackenzie, right, scored the tying goal for Centennial in their match against Elgin Park on Monday. She's shown in a game against Charles Best earlier this season

The Charles Best Blue Devils have already qualified for the BC High School AAA Girls soccer provincials. But the fate of the Heritage Woods Kodiaks and Centennial Centaurs still hangs in the balance.

Best, who were ranked seventh heading into the tournament, lost their semi-final to third seed Sardis, 4-0, on Monday. The Blue Devils will play Clayton Heights Thursday at the South Surrey Athletic Complex to decide third place in the tournament. But by finishing in the top seven, they’re already qualified for the provincial championship tournament, to be held in Burnaby, May 31-June 4.

The Centaurs set up a showdown with the Kodiaks Wednesday at Heritage Woods by defeating 14th-ranked Elgin Park 4-1 at Coquitlam Town Centre on Monday. The winner of their match automatically qualifies for the provincials and will play Thursday to decide fifth place in the Fraser Valley tournament. The loser will play Thursday to decide the last berth in the championship.

Centennial spotted the visitors a 1-0 lead 11 minutes into the match despite dominating the flow of play. But Raegan Mackenzie put the sides on even terms heading into half-time on a backheel in the 20th minute.

Catrina Olstrom’s breakaway goal early in the second half put Centennial in front to stay. Jessica Vance added insurance when she scored off a corner kick then Kiara Buono made it 4-1 on another breakaway.

Heritage Woods, who were the second-seeded team heading into the tournament but stumbled in their first match by losing to Enver Creek 2-1, beat Walnut Grove Monday, 5-0.

A 28-22 loss to the Maple Ridge side was the only blemish on an otherwise undefeated season for the Rapids, who failed to win once the previous two seasons.

“Revenge in the final would be a fairy tale ending to a turn-around season,” said Rapids’ coach Darren Mackenzie.

The Rapids reached the final by defeating Chilliwack 15-12 in last Thursday’s district semi-final. Duncan Kelt and his brother Ethan each scored tries for the winning side, while Kyle Granville contributed a conversion and a penalty.

Westview won the other semi, 7-0 over Brookswood.

The showdown for district rugby supremacy begins at 4 p.m. at Riverside.