BCHL team has one loss in its first six games, all against the Langley Rivermen. It finally sees a new opponent on Saturday.
Oct 23, 2020 3:55 PM By: Mario Bartel 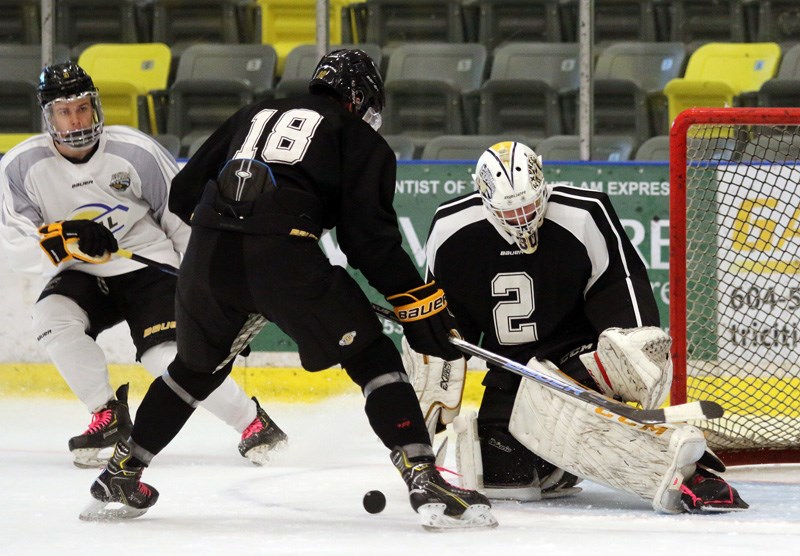 Coquitlam Express players are getting lots of practice time on the ice at Poirier Sports and Leisure Complex as the team embarks on the second half of its extended exhibition season that's scheduled to run until the end of November.MARIO BARTEL/THE TRI-CITY NEWS

The coach of the Coquitlam Express says his team is “exciting to watch.”

But you’ll just have to take Dan Cioffi’s word for it.

As the defending BC Hockey League regular season champions embark on the second half of an extended training camp that started in September, fans are still not allowed in the junior circuit’s arenas, and for those not invested enough to subscribe to live streaming video feeds, games only exist as line scores on a website.

While the league anticipates that changing by Dec. 1, when it hopes to launch a shortened regular season schedule with at least some fans in buildings, Cioffi said his charges are making the best of the unique circumstance of playing hockey in the middle of a pandemic.

Part of that circumstance is a two-month exhibition season that the Express opened with seven straight games against the Langley Rivermen before players they're able to test themselves against a new opponent, the Chilliwack Chiefs, on Saturday. The cohort expands slightly in late November, when they’ll face the Surrey Eagles for a couple of games.

Cioffi said the team has approached the familiarity of a limited range of opponents as if they’re in a playoff series, but without the pressure of post season.

“It helps us identify areas we need to work on,” he said.

Between weekend games, the Express practice. A lot.

Cioffi said with little else to do — so the integrity of the team’s self-styled bubble stays protected — players spend a lot of time at their own dedicated area of the Poirier Sport and Leisure Complex, working out, playing ping pong and just talking. To address their mental needs as much as their physical requirements, they work with a sports psychologist on Wednesdays and have access to a chaplain.

“We’re talking with them about more than just hockey,” Cioffi said. “You get to know more about the players personally, their families, how they’re coping with everything.”

That close-knit vibe extends to the ice, where Express veterans like Cooper Connell, Jack Watson and Noah De La Darantaye are taking the team’s newcomers under their wing.

Still, the absence of fans is notable.

Cioffi said Express staff and volunteers who are allowed in the building are doing their best to create a game-day atmosphere. Players are still introduced over the public address system, goals and penalties are announced and everyone on the bench cheers a good play, but in between those times, the quiet can be deafening.

“You miss hearing the fans cheering,” Cioffi said. “[The players] want the fans, they like to be cheered on.”

And with five straight wins over the Rivermen to start the exhibition season, before the Express were finally defeated by Langley last Sunday, 4-1, there would have been plenty to cheer about. Forward Greg Lapointe leads the league in scoring, with seven goals and eight assists in five games, and Connell has seven points in six games. Goaltender Watson has allowed just three goals in two starts.

Those are the kind of numbers a team can build on as it progresses towards the planned start of the regular season.

“Our asset is our skating and size,” Cioffi said. “We just need some time to grow.”

With another month of exhibition games ahead of them, the Express has just that.

No place is home for Port Moody Panthers

While the Coquitlam Express are able to play home games at Poirier, the Port Moody Panthers are still without a home.

The Pacific Junior Hockey League team is playing its home games at the Olympic Oval in Richmond as it awaits approval to have full access to its facilities at the Port Moody Rec Centre.

Because of the ongoing public health crisis, the Panthers are playing in a cohort that includes the Richmond Sockeyes and the Grandview Steelers, that play out of the Burnaby Winter Club. No fans are being allowed at any games.

Panthers general manager Brian Wiebe said while the Panthers are able to practice at Port Moody Rec, he’s still received no indication when the team will be able to host games there.

However, the issue is scheduled to be discussed at city council on Tuesday.

According to a staff report, the city has received several requests from user groups — including the Panthers — for access to the dressing rooms. But, said recreation manager Jim LaCroix, will take considerable staff time to implement additional cleaning protocols to touch points like door handles, benches, arena gates and washroom fixtures. As well, the rooms would have to be fogged with a special disinfectant mist that must be allowed to dry for 10 minutes.

LaCroix estimated to continue those procedures through to the end of March will cost the city an additional $63,500.

Wiebe said his team is willing to keep its own dressing room clean and disinfected, as well as clean the room used by visiting teams after a game.

The Panthers have a win, a loss an dan overtime loss in three games so far this season. They face the Steelers Saturday at the Oval.