In a sport where competitors try to save every gram of weight they can, the women of The Cyclery-4iiii cycling team will be carrying the weight of the world on their shoulders when they speed around downtown Port Coquitlam in Friday’s second PoCo Gra
Jul 11, 2017 12:00 PM By: Mario Bartel 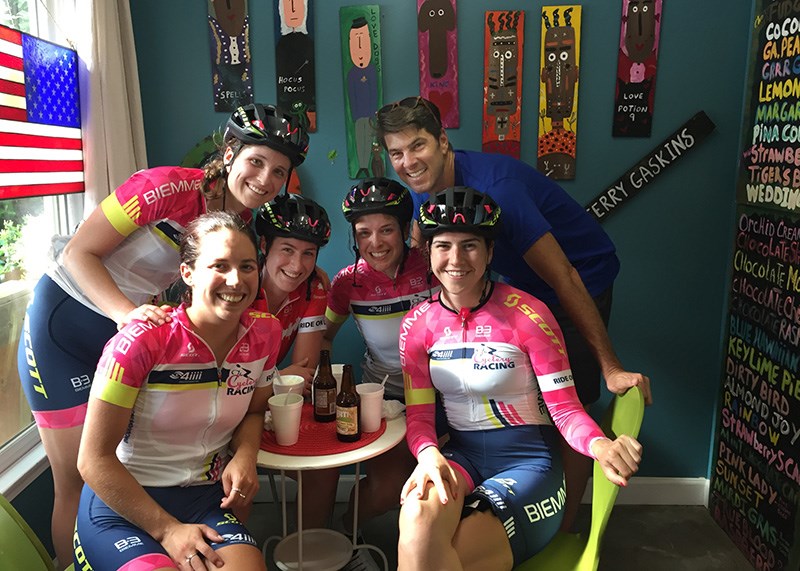 In a sport where competitors try to save every gram of weight they can, the women of The Cyclery-4iiii cycling team will be carrying the weight of the world on their shoulders when they speed around downtown Port Coquitlam in Friday’s second PoCo Grand Prix.

Last December, the team lost one of their own in a traffic accident.

Ellen Watters was about to graduate from the amateur junior development team to her first pro contract when she was struck by a car while on a training ride in New Brunswick.

“We have often used the phrase ‘cycling family,’ and it truly does feel like we have lost a member of our family,” Trew said. “She was an exceptionally bright light and I’m not sure it makes sense to anyone that she isn’t with us any longer.”

Trew said coming to BC Superweek has been especially difficult for the team as Watters loved racing in the week-long series of races around Metro Vancouver, and she thrived in the criterium style of racing like the PoCo Grand Prix. And a new event in New Westminster would have given her the chance to race in front of her sister, Lily, who lives right near the course.

“She loved this week of racing. The criterium was a great race for her, wanting to hit out attack after attack,” Trew said. “We all have many memories of Ellen - both on and off the bike - rooted here.”

Trew said the team has pulled together and drawn strength from Watters’ memory as they barnstorm the North American racing circuit. Their kit features a white band with “RIDE ON LNH20” (LN = Ellen: H2O = Watters) on the sleeve. Some members have affixed stickers of Watters’ signature to their bikes.

But more importantly, Trew said, they try to race in a way that would have made Watters proud.

“Her style of racing was everything that our team is about, and each girl has honoured Ellen at different times this year by attacking and supporting their teammates selflessly,” Trew said. “She was a binding force during her lifetime, and the love she gave each of us will continue to bond for many years to come."

That bond can be especially important in the hardscrabble existence of bike racers in North America, far from the glory and glamour of the UCI World Tour and renowned European races like the Tour de France. Prize money is scant, riders often bunk with local billets and cook their own meals to cut costs.

Those hardships are compounded for women racing on an amateur team, Trew said. Most of her riders have to weave their training and racing through jobs or school, or even both.

“Cycling for women is truly a labour of love at all levels,” Trew said. “It requires that the women have exceptional time management skills to excel. The travel can be hard, but working within a strong team allows the girls to enjoy many jokes and see fun places. We seem to take a lot of detours to donut shops across the continent.”

The team’s cohesion and ability to work together will be tested Friday in PoCo. Trew said the flat, twisty circuit means the bulk of the peloton will likely still be together for a massive bunch sprint to the finish, so the team that can create a strong lead-out train for their sprinter through the final corners will be rewarded at the line.

“We are here to race and to podium this week,” Trew said. “It will be a tough ask, but the girls are up for it.”

• Watter’s death sparked the New Brunswick legislature to pass “Ellen’s Law,” a safer passing law that requires motorists to give vulnerable road users like a cyclists or pedestrians at least 1.5 metres of clearance and an entire lane if there’s more than one lane going in the same direction. Similar laws have been enacted in more than 27 jurisdictions across North America, including Ontario, Quebec and Nova Scotia, as well as several in Europe.

The BC Road Safety Law Reform Group that is comprised of representatives from the Trial Lawyers Association of BC, the British Columbia Cycling Coalition, HUB Cycling, and health researches, wants a similar law passed in BC. According to the group, “an objective, easy to estimate minimum passing distance is better than a subjective standard of safe driving behaviour,” much like speed limits impose a standard of safe behaviour. ICBC estimates an average of 1,400 cyclists are injured and 10 are killed in the province every year in collisions with other vehicles.