Fabbro hungry for success with Predators 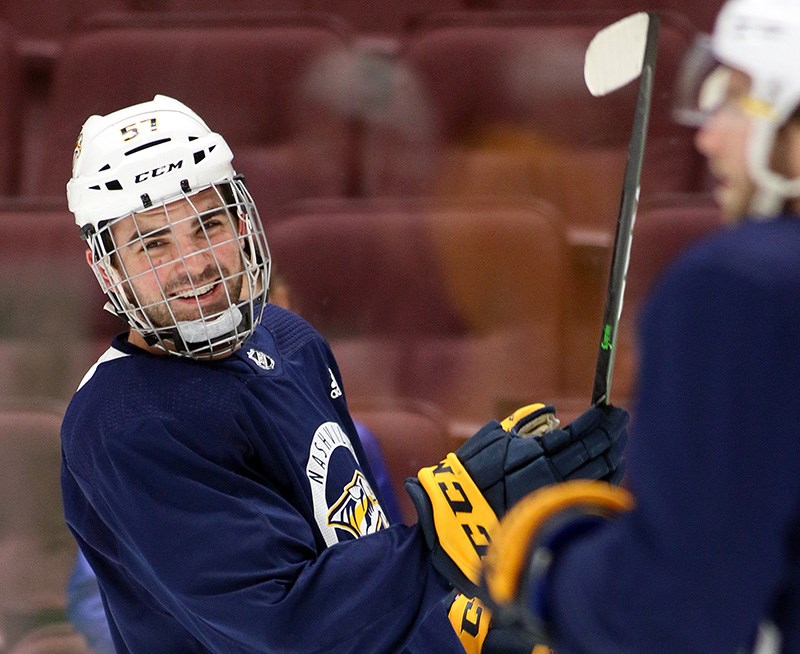 Coquitlam's Dante Fabbro enjoys a moment during the Nashville Predators' practice at Rogers Arena on Monday. He's wearing a cage after he was hit in the face by a Evander Kane slapshot in San Jose on Saturday.MARIO BARTEL/THE TRI-CITY NEWS

Dante Fabbro is a man in demand this week.

The rookie Nashville Predators defenceman from Coquitlam stood in his skates long after practice was finished Monday as he greeted family and friends and signed autographs the day before his first NHL game in Vancouver Tuesday evening. (More than 100 were to attend the game.)

It's a dream come true for Fabbro to play at Rogers Arena — but not as a Canuck.

It was another B.C. boy who patrolled the Preds blueline at the time, and is now a Montreal Canadien, who captured his imagination when he was growing up.

“I was a big fan of Shea Weber. He was an unbelievable player and he had a big impact on every game he plays, and that’s something I’d like to build up to and be striving toward,” Fabbro said. “I can’t not say I wasn’t a Canuck fan growing up, but it was Nashville for the most part.”

From an early age, Fabbro, who attended Lord Baden-Powell elementary school, Como Lake middle and Centennial secondary, knew hockey was in his DNA. His grandfather, Gerald Fabbro, played collegiate hockey for three seasons (1958 to ’61) at Michigan Tech before moving to Coquitlam and Fabbro’s father, Steve Fabbro, played puck too.

“I felt myself becoming better and better, and I think really setting those short-term goals leading up into your long-term goals that was huge for me,” Fabbro told The Tri-City News. “I wanted to make sure I was the best version of me at every level and try to dominate every level. I thought I did so for the most part.”

The last 12 months or so have been quite the whirlwind for the 21-year-old. In addition to being co-captain of Boston University's team, Fabbro played for Canada at the Spengler Cup in Davos, Switzerland last Christmas. Once his college season finished, he signed with Nashville.

He played four regular season games, scoring one goal. Then, in the first round of the Stanley Cup playoffs, which the Preds lost in six games to the Dallas Stars, Fabbro picked up one assist.

In 18 games this season, Fabbro has two goals and three assists and is a plus-7 while playing alongside Mattias Ekholm, with between 16 and 22 minutes of ice time a game.

“My third year [at university], I was really trying to mentally prepare what I needed to do to be ready for that jump because I knew I was going to [sign with the Predators] after my season was over. I thought the transition has been pretty smooth,” said Fabbro, who was a first-round pick of the Preds, 17th overall, in 2016.

Still, he admits he experienced one of those welcome-to-the-NHL moments early on.

“My first game, in the second period, I tried to step up on a high flip [of the puck] and ended up getting tripped up and a guy goes in and scores on a breakaway. Certain things might work in college that obviously don’t work in the NHL, but it’s a learning experience,” Fabbro said.

He has certainly made an impression on Preds head coach Peter Laviolette.

“He’s a really smart two-way player,” Laviolette said. “When you’re young, you’re trying to get out of your end and get through the neutral zone and be a good offensive player, and I think that will grow, the offensive part of the game, as will the defensive.”

Fabbro performed so well, it made the decision easier for general manager David Poile and Laviolette to trade former Norris Trophy winner P.K. Subban — who Nashville had acquired in a trade for Weber — to New Jersey in the off-season.

“That gives a young player a lot of confidence and I thought it gave me a lot of confidence in myself,” Fabbro said. “You’ve still got to work for everything you get, so my mindset never really changed. I just wanted to make sure I came into camp as ready as I could and make sure I earned that spot rather than just being given it. It’s been a long process and a lot of fun.”

That fun would include bunking down with Port Moody’s Ryan Johansen, Nashville’s top centre now in his 10th NHL season, who offered the fellow Tri-City native a place to stay.

“He was a young kid. I’ve been in that situation and it would be a lot easier if you didn’t have to run around town and find a place and rent furniture and do all those types of things. I had a couple of extra bedrooms so it was kind of a no-brainer to bring him in and make him a little more comfortable,” Johansen said, adding he believes Fabbro’s career ceiling is high.

“First year in the league, but to me he plays and acts like a veteran already. That’s rare to see at a young age. To me he’s only going to get better.”

The teammates insist there’s no inter-Tri City rivalry going on, although according to Johansen, there’s a simple reason for that.

“No banter. We all know Port Moody’s better. We don’t need to argue about it.”

And there’s no arguing Fabbro belongs in the NHL.