Jason Fortier's debut in Texas was delayed by several months because of the border closure.
Nov 30, 2020 8:00 PM By: Mario Bartel 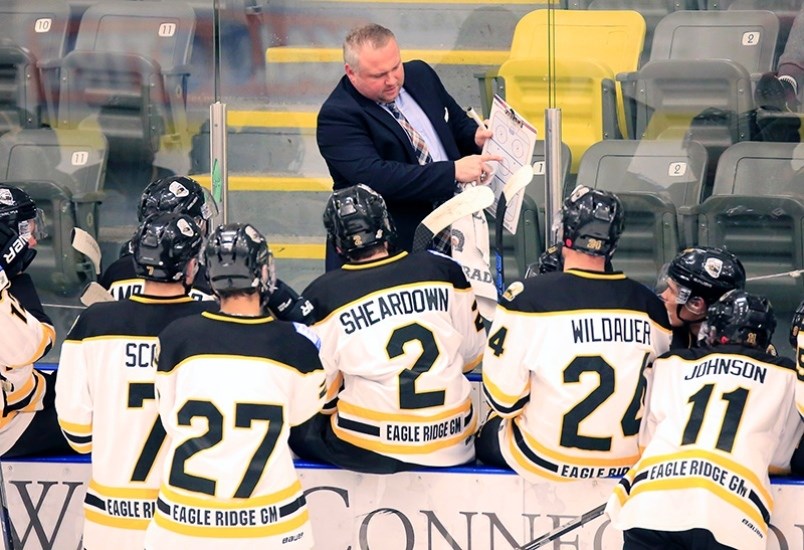 Jason Fortier led the Coquitlam Express to a regular season championship in the BC Hockey League. He's now coaching the Odessa Jackalopes in the North American Hockey League.

Former Coquitlam Express coach and general manager Jason Fortier is finding some success, deep in the western part of Texas.

He has his new team, the Odessa Jackalopes, in third place in the South division of the 23-team North American Hockey League — a Tier II junior circuit similar to the BCHL.

The Jackalopes defeated the Amarillo Bulls, 4-3, last Saturday in Odessa to improve its record to four wins and five losses. Last season the team won only nine games in total.

Fortier helmed the Express to the BC Hockey League’s regular season championship before the league’s playoffs were cancelled after the first round because of the COVID-19 pandemic last spring.

He landed with the Texas junior squad in April when contract negotiations to extend his two-and-a-half year stint with the Express broke down shortly after the abrupt end of last season. But his arrival in Odessa was delayed for several months because of the closure of the border between Canada and the United States due to the public health crisis that complicated his ability to attain a work visa.

“It was crazy stressful to be honest,” Fortier told the Odessa American newspaper when he finally got to town in mid-October.

The delay meant he had to monitor the Jackalopes’ summer training camps over Zoom while his assistant, Nate Skidmore, worked with the players on the ice.

With Fortier finally behind the bench, the Jackalopes won their first three games of the season before losing five straight prior to Saturday’s victory.

Fortier told the American that restrictions brought on by the ongoing pandemic have made it more difficult to build the team’s chemistry.

“It’s been a bit of a challenging process because it’s been more of a teacher-student mentality versus a we-are-family mentality,” he said.

Meanwhile, Fortier’s replacement in the front office of the Express, Dave McLellan, has left the team.

Tali Campbell, who joined the BCHL team as a vice president in October after he parted ways with the Nanaimo Clippers where he was that team’s general manager, announced on Twitter last Thursday that he’s now assumed the GM role in Coquitlam as well.

“This year has been tough for all, but our players and staff are riding this wave and it’s a pleasure to be with them on this,” Campbell said.