Game off: Graduating athletes feeling the strain of pandemic shutdowns

March 11, 2020, much of the world started to shut down because of a virulent new contagion known as COVID-19. Sports was one of the first casualties. A year later many young athletes are still on the sidelines, training but not playing competitive games. It's taking a toll.
Mar 11, 2021 6:49 AM By: Mario Bartel 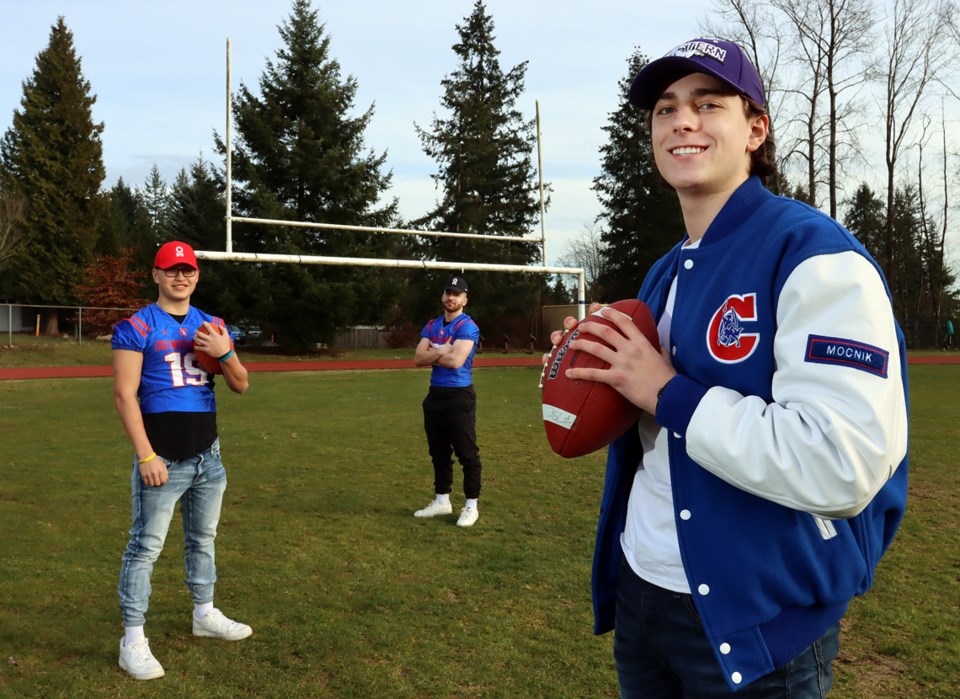 Joey Mocnik, Drew Lirag and Mansur Sarvari will continue their football careers at university in September. But the uncertainty of the pandemic that meant they didn't have a season to hone their skills and catch the attention of recruiters made it stressful.MARIO BARTEL/THE TRI-CITY NEWS

March 11, 2020, an NBA basketball game between the Utah Jazz and Oklahoma Thunder was called off just moments before tip-off after a player tested positive for COVID-19. The rest of the sports world quickly followed. Not just pros, but all the way down the ranks to youth. At first, it was thought the shutdown would last a few weeks, so it was called a pause. A year later, many are still paused, training but not competing.

A year without meaningful competition is taking a toll on young athletes — especially those looking to make the next step in their sporting aspirations.

Tali Campbell, the general manager of the Coquitlam Express junior hockey team, says he’s talked with players about suicidal thoughts. A graduating football player at nearby Centennial secondary school has given up on his dream of playing for a college program in the United States.

Campbell said not only are some of his players still coping with the lost opportunity of winning a championship when the BC Hockey League shut down last March in the midst of its playoffs because of the COVID-19 pandemic, but they’re also stressed about possibly missing out on scholarships to U.S. college programs because they can’t showcase their talents in competitive games.

“Every kid knows March 13 last year is when Hockey Canada shut us all down,” Campbell said. “It’s a year later, and their dreams are crushed.”

Campbell said to help keep those dreams alive, he’s released some players to pursue their own opportunities to play, traded others to leagues elsewhere in the country that have resumed playing games. Last week, he gave the team the week off, a mental health break away from the monotony of endless practices.

“I can’t imagine being in their position,” Campbell said.

Joey Mocnik was planning to use his senior football season at Centennial secondary to showcase his unique skill set as a linebacker and long snapper to U.S. college recruiters. But as COVID-19 swept around the world and shut borders he had to scale back his dreams.

“Last March, everything just changed,” he said. “So much I was looking forward to was just flushed away.”

Instead, Mocnik started researching Canadian programs. But as the pandemic progressed and it became apparent there would be no high school football season that would allow him to gather new game film he could send to recruiters, he began to doubt even that option.

In October. Mocnik connected with a recruiter from Western University in London, Ont. Unable to sell them with current accomplishments on the field, he knew he had to win them over by showcasing his commitment, dedication and desire.

Mocnik doubled down on his efforts in the gym to get bigger and stronger, and worked to improve his grades to show he could handle the academic challenges of the school’s management and organizational studies program.

“It’s all on me,” Mocnik said. “I have to take the bull by the horns to use every opportunity and do the most with it.”

Teammates Mansur Sarvari and Drew Lirag said they also leveraged the disappointment of not having a football season to fuel their efforts in the gym, during workouts at practice and in the classroom. Both are headed to Simon Fraser University in September.

“We had to be realistic about it,” said Lirag, a defensive back, who cold-called and sent emails to coaches across the country then followed up persistently. “You have to make sure they don’t forget about you.”

Sarvari, a running back and kicker who only started playing football when he was in grade 10, said not playing games last fall made it hard to tell if he could measure up at the next level of competition. So he tested himself in the weight room, pushing himself to work harder, lift more than his teammates.

“Being isolated, you can’t do anything,” Sarvari said. “That’s been the hardest challenge.”

Dr. Noel Dyck, a sport anthropologist at Simon Fraser University, said the loss of connection athletes get from striving together as a team towards a common goal has been one of the biggest costs of not being able to play competitive games during the pandemic.

“Without that, sport doesn’t really mean much.”

Dyck said playing games isn’t just the culmination of training and practice, it’s also the payoff for how athletes eat, spend their downtime, manage their schedule and interact with their teammates.

“There’s a complete commitment of competitive athletes,” he said.

So much so, Dyck added, a great deal of an athlete’s identity is wrapped up in their sporting endeavours.

“It’s a complete commitment to a particular form of involvement,” he said. “When you take that away, it can be difficult, it can be hard to keep your morale up.”

Centennial coach Dino Geremia said without the weekly cycle of game preparation, his primary role has become cheerleader, keeping his players motivated and giving them the tools to navigate the recruiting process so they could show themselves as best they could.

“There’s no template on what to do,” he said. “You just have to give them opportunities to socialize, feed off each other’s energy and find other ways to compete.”

Campbell said even with the respite of exhibition games the Express was able to play last fall before broader public health restrictions sent the BC Hockey League back to socially-distanced practices, the past year has been a grind on the entire organization.