Dean Stanton wants cyclists to see parts of the Lower Mainland they’ve never experienced before.
May 8, 2018 3:47 PM By: Mario Bartel 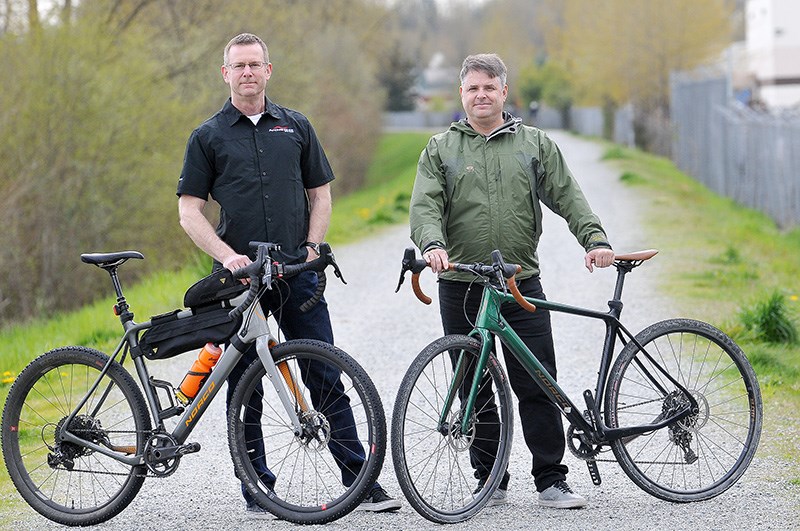 Chris Cook, the marketing manager for Norco Bikes, and Dean Stanton, of Tri1 Events, check out a pair of gravel bikes that are a growing niche in the bike market. Stanton is the organizer of the first Golden Ears gravel fondo on May 26 that begins and ends in Port Coquitlam and will take adventurous cyclists along the dikes for 50 or 100 kilometres.MARIO BARTEL/THE TRI-CITY NEWS

Dean Stanton wants cyclists to see parts of the Lower Mainland they’ve never experienced before. That’s a tall order for a region with more than 1,400 kilometres of designated bikeways and a worldwide reputation for challenging trails on difficult mountain terrain.

Stanton’s inaugural Golden Ears gravel fondo on May 26 will take adventurous cyclists along the elevated dikes into Minnekhada, back down across the Pitt River bridge, around the Pitt Meadows airport and up Pitt Polder to the boat launch before returning to the start/finish area in Port Coquitlam near the Coast Meridian industrial area. Riders of the 50 km medio fondo or the 100 km full fondo will traverse pavement only about 10% of the time.  The rest of the ride will be on the gravel and dirt surfaces of the dikes.

Until recently, those dikes have been almost the exclusive domain of casual strollers and dog walkers. But a growing cohort of cyclists is seeking new terrain, new vistas, new adventures, and they’re doing it on a new class of bikes that exists somewhere on the continuum between lithe road bikes and fat-tired mountain bikes.

Chris Cook, the marketing manager for Norco bikes in Port Coquitlam, said while gravel or adventure bikes might seem new, they’ve kinda always been around as roadies rattled over rocks or cobbled roadways on their skinny tires and mountain bikers slogged along logging roads to access gnarly singletrack. Except engineers and designers have now brought the performance elements of a road bike and the terrain handling capabilities of the mountain bike together in one package that can pretty much take a cyclist anywhere they want to go.

“People have been looking at this for decades,” Cook said. “But it’s taken some organization, scale and interest to bring it to the forefront.”

Gord Hobbis has seen the new trend towards go-anywhere performance bikes reflected on the sales floor of his Cap’s The Original bike shop in New Westminster and recently opened in Port Moody.

“People are looking for something a little different,” said Hobbis, whose family has been in the bike business since 1936.

Stanton has been organizing triathlon races for about 15 years, but five years ago he launched the Kettle Mettle fondo to showcase the railway trail between Penticton and Kelowna. It was the first event of its kind in Western Canada. Last year he started the Cowichan Crusher on Vancouver Island, and the addition of the new Golden Ears gravel fondo has created a triple crown of adventure events for cyclists with a penchant for punishment.

It took almost three years of route planning and negotiation with four municipalities as well as Metro Vancouver for the local event to come together.

Stanton said he’s seen interest in gravel riding catch fire. Many of the riders in that first Kettle Mettle completed the 130 km route on mountain or cyclocross bikes but he expects most entrants in the Golden Ears event will be riding on bikes specifically designed for riding gravel and dirt trails.

Those design elements include a slightly longer wheelbase and higher bottom bracket than a typical road bike, disc brakes for reliable stopping in all weather conditions, and the capability to accommodate wider tires that soften the harsh bumps. Cook said his company’s high-end models can even include a “dropper” seat post that allows the rider to adjust their riding height on the fly for easier climbing and more assured descents.

Cook said some of the refinements grew from lunchtime rides Norco employees regularly embark upon from their offices in the Coast Meridian industrial park. Tired of the routine and dodging cars along busy roads, they often veered to the nearby dikes in search of new challenges and safer environs.

Stanton said that yearning for new experiences harkens back to cycling’s earliest days when bikes were new, exciting technology and newly-minted cyclists were keen to test their own capabilities and those of their machines.

“It’s like mountain biking was back in the 1980s, when people were riding dirt logging roads without the extremeness of obstacles,” he said

• For more information about the Golden Ears gravel fondo, or to register to ride, go to http://goldenearsfondo.com/