High school basketball ‘making the best of the situation’

The Kodiak Classic is normally an early-season barometer for contenders for the provincial championships in March. It's not happening, and the latter is still uncertain as high school basketball season is delayed.
Nov 30, 2020 6:12 AM By: Mario Bartel 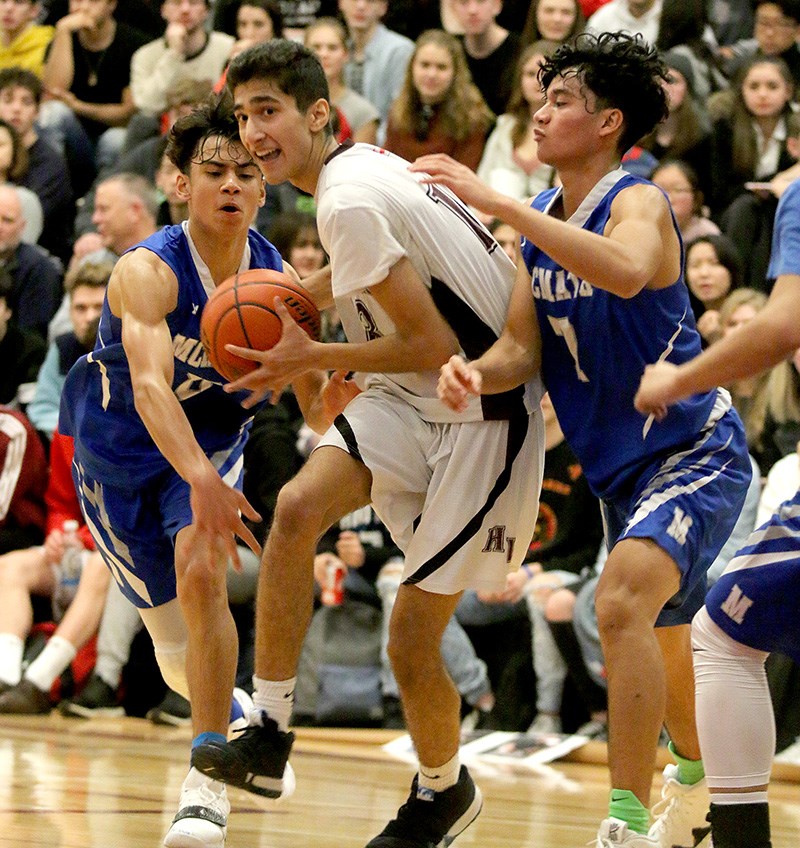 The annual Kodiak Klassic basketball tournament at Heritage Woods secondary school is usually an early barometer of teams that might compete at the provincial championships in March. This year it's been cancelled because of the COVID-19 pandemic.

In the waning days of November, the halls at Heritage Woods secondary school are normally abuzz with anticipation for the annual Kodiak Klassic basketball tournament.

“What teams are coming this year?”

“Who are we playing in the first round?”

But this year is hardly normal.

The tournament, that is scheduled for Dec. 3 to 5 and usually attracts a contingent of top teams looking to test themselves early for a possible run at the provincial championships in March, has been cancelled.

Art students that spend the weeks prior creating giant 4’ X 8’ posters for each participating team to adorn the gym walls are instead working on other projects. Music students aren’t rehearsing rousing pep tunes, and drama students aren’t composing unique cheers.

“Basketball is part of the culture at Heritage Woods,” said the Port Moody school’s athletic director Gregory Schellenberg. “It’s an incredible vibe and we’re all sad to miss out on it.”

Like almost every other sport in British Columbia’s high schools, basketball is on hold because of the COVID-19 pandemic.

Officially, the season has been delayed until Jan. 4.

“We’re all still trying to remain optimistic,” Schellenberg said. “We’re all hopeful that we’ll have some sort of season.”

At Riverside secondary in Port Coquitlam, Paul Langford is trying to keep his senior girls team as active and engaged as he can. But, he admitted, it’s “hard, especially when we have no idea when we will start up again.”

Langford, who’s helmed various teams around Metro Vancouver for 45 years, said it’s been difficult to put together any sort of program given the ever-changing landscape in a pandemic and the structure of the school year where students have been grouped into smaller learning cohorts to minimize opportunities to transmit the contagion.

“Plans don’t really happen with COVID,” Langford said. “We were going a few times in the morning, but that was hard because the girls’ schedules are not the same as they were before.”

Even something as fundamental as being able to shower after a workout has been nixed by public health orders, he added. “We will continue to make the best of the situation.”

Schellenberg said the Kodiaks girls and boys teams have been practising, “albeit a bit differently than in years past.”

He said players have been working on fundamental individual skills like ball handling, passing and shooting, but scrimmaging is not allowed.

Langford is also being creative, running players through individual drills while keeping them apart, and working on their fitness. Some, like Grade 11 Brooke Kendal, are also working out on their own by doing things like climbing the Coquitlam Crunch.

But the absence of competitive games, an opportunity to test players’ mettle to see how their hard work has paid off, is wearing.

“It is sad when you know traditions will not be carried on and girls cannot get out and play,” Langford said.

That realization is especially hard on the seniors who would be playing the season to possibly catch the eye of college recruiters and coaches so they can continue competing at the post-secondary level, he added.

But, Schellenberg said, the players are acutely aware of the cards they’ve been dealt and they remain keen.

“Just the fact that they’re able to be in the gym with a ball in their hands is something,” he said. “For now, they’re content with what they have, and are hopeful for an opportunity to play and compete in the new year.”