As Danae Robillard prepares to embark on her final season of high school soccer at Centennial secondary, she knew she didn’t want to stray too far from home after it’s done.
Mar 20, 2018 3:00 PM By: Mario Bartel 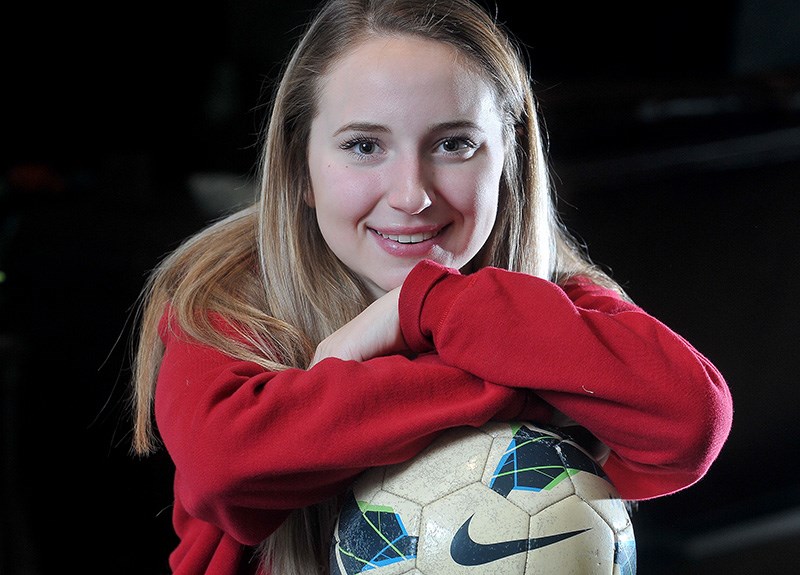 Danae Robillard, he captian of the Centennial Centaurs girls soccer team, will stay close to home after she graduates. She's one of eight new recruits that will join the SFU Clan in the fall.MARIO BARTEL/THE TRI-CITY NEWS

As Danae Robillard prepares to embark on her final season of high school soccer at Centennial secondary, she knew she didn’t want to stray too far from home after it’s done.

So the Centaurs’ captain will dribble up Burnaby Mountain in the fall to win a midfielder position with the Simon Fraser University Clan.

The proximity will be more than just geographical.

Robillard said the comfort of that familiarity was important as she considered recruiting overtures from other schools, including one in Nashville, Tenn., after a showcase tournament last year in Surrey.

In fact, Robillard wanted it so badly, she initiated contact with Hamel to explore the possibility of playing for her at SFU.

“Annie is a great coach,” Robillard said. “The team is like a family to her.”

The admiration was mutual.

“Danae is a tenacious midfielder with a high soccer IQ,” Hamel said. “She is composed on the ball and moves well off it.”

Some meetings and a campus tour ensued, but Robillard was already sold. Attending and playing at SFU would give her a chance to travel a bit, play top competition in the NCAA’s Great Northwest Athletic Conference, but still enjoy the benefits of her mom’s cooking and laundry skills.

“I’ll be playing at a high level,” Robillard said. “I don’t have to spend time making my own dinners or doing my laundry. I can put more of my focus on soccer.”

Stepping up to university play will also mean starting over.

At Centennial, Robillard is a leader, the Centaurs’ captain. She was the school’s female athlete of the year in grades 9, 10 and 11, as well as the most valuable player for the girls soccer team. At SFU she’ll be part of a recruiting class of eight freshman hoping to play their way onto the Clan’s starting roster.

“I’m prepared to look up to their leaders,” she said. “Hopefully I can become one of them.”

Hamel’s confident that can happen.

“She can play any position in the midfield and is someone whose contribution is going to be really important to our team,” she said.