Port Coqutilam's Dan McGuire was one of the founding members of the BC Randonneurs, a quirky group of cyclists dedicated to pedalling long distances. He passed away Dec. 12.
Jan 15, 2021 7:28 PM By: Mario Bartel 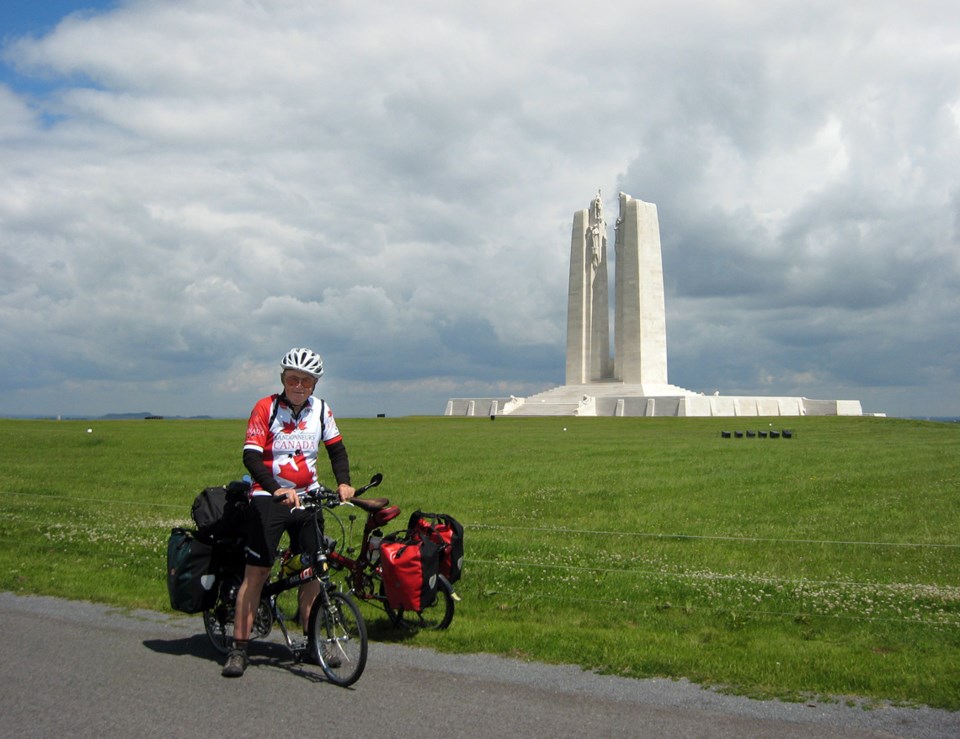 Dan McGuire on a bike tour of France. His daughter, Tara, said her father loved to travel the world by bike, including a journey to the four corners of Canada over the coursre of two years that he accomplished in his 80's despite several medical challenges like Parkinsons.SUBMITTED PHOTO

Dan McGuire was small in stature, but in British Columbia’s quirky community of long distance cyclists, the longtime Port Coquitlam resident was larger than life.

McGuire died Dec. 12 at the Lakeshore Care Centre in Coquitlam. He was 88.

His daughter, Tara, posted on social media that he died from COVID-19 — only three days after he was diagnosed.

Born in Saskatchewan, McGuire was one of the founding members of the BC Randonneurs, a group of cyclists dedicated to logging long days on two — and sometimes three — wheels. He was part of a contingent of riders that organized a series of long-distance events ranging from 200 to 1,000 km in 1979 that would qualify them to participate in the famed Paris-Brest-Paris brevet, a 1,200-km endurance event in France that is held every four years.

McGuire went on to ride it three times. He also travelled to the event on several more occasions to support other riders from the club.

Garry Pareja, a member of the old Vancouver Bicycle Club that spun off the collection of hard-core riders that became the BC Randonneurs, said the group prepared by riding to Mt. Baker and back, or completing ascents of Cypress Bowl, Mt. Seymour and Burnaby Mountain all in one day.

“This branch of the club became the ‘Hard Riders,’” Pareja wrote on the BC Randonneur’s historical timeline.

But it was McGuire’s determination to keep pedalling even after his mobility diminished because of Parkinson’s disease that really cemented his status amongst the sport’s giants as well as an inspiration to show others living with the degenerative affliction what’s possible.

McGuire, who discovered cycling when he was about 40, had ridden across Canada a few times.

But at the age of 80, and coping with various ailments like arthritic knees and hands, scoliosis in his spine, macular degeneration in his eyes and the onset of Parkinson’s, he decided he wanted to pedal his bike to the four corners of the country — a journey of about 10,000 km.

By then, wrote Tara in a blog post, the disease and medication had so diminished her father, when he’d occasionally fall asleep at the dinner table “he’d look very much like a skinny grieving question mark.”

There was no questioning his determination to realize his cycling dream, though.

“Dan could focus intensely on an idea and the tasks that lay ahead,” wrote Leo Boon, another of the sport’s pioneers in B.C., in a memoriam on the Randonneurs’ website.

“He was just so stubborn,” Tara told the Tri-City News.

McGuire’s journey to Canada’s most westerly, northerly, southerly and easterly points took him two years, with a break in between to rest his ailing back.

When he resumed in the summer of 2014, he’d switched from a two-wheeled bicycle to a three-wheeled recumbent to ease some of the aches of his aging body and keep him from tipping over. As well, Tara said, it allowed him to pull to the side of the road whenever he pleased to just bow his head for a bit of a snooze. He had no organized support team, no motorhome to which he could retire when he wearied.

Instead, Tara wrote, he relied on the kindness of strangers to look out for him.

“Dad’s confidence in the positivity, general all-around goodness of the human race, was a gamble he was willing and pleased to take.”

That spirit was infectious.

Fellow randonneur Ralph Maundrell wrote in tribute, “Dan had the ability to install confidence in people,” adding McGuire inspired his own pursuits in long-distance cycling and even marathon running.

“We have lost a wonderful human being, a tough old guy, a great cyclist,” said Boon.

“He could be gruff, but he was also very generous,” said fellow cyclist Deirdre Arscott.

Tara said it’s been heartwarming to hear the impact her father had on so many cyclists.

“He really worked hard to get people cycling,” she said. “We were always kind of impressed with his accomplishments.”

A virtual memorial service to celebrate McGuire’s life will be held Jan. 23. The family is requesting people honour his memory by donating to Parkinson Society BC.