It’s a good time to be a soccer player in Coquitlam. The Coquitlam Metro-Ford soccer club is graduating 30 players to post-secondary programs across North America. Some of them were the core of the boys and girls teams at Dr.
Aug 28, 2018 2:02 PM By: Mario Bartel 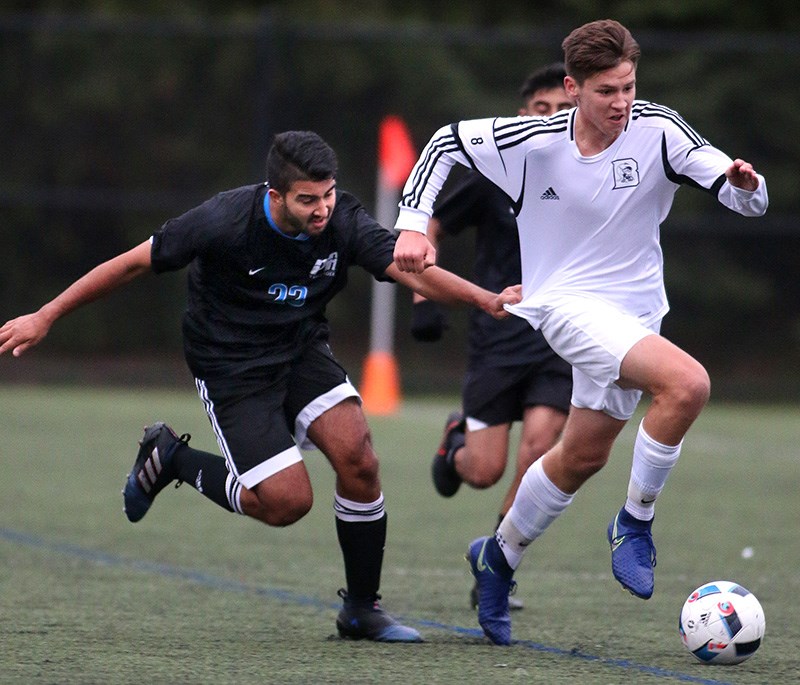 Dr. Charles Best forward Quintin Desaulniers, right, is one of 30 graduates of Coquitlam Metro-Ford Soccer Club competitive youth teams that will be playing at post-secondary programs in the fall.THE TRI-CITY NEWS FILE

It’s a good time to be a soccer player in Coquitlam.

The Coquitlam Metro-Ford soccer club is graduating 30 players to post-secondary programs across North America. Some of them were the core of the boys and girls teams at Dr. Charles Best and Centennial secondary schools that are reigning provincial high school champions. The club has also won several provincial cup and Coastal Cup championships.

Dale Mitchell, the head coach who oversees all of CMFSC’s teams — from the Under-4 year-old boys and girls learning the motor skills required for the game in its initiation academies to the 250 kids who play in the BC Premier Soccer League, the top level of youth club soccer in the province — said the recipe for success is a simple mix of great facilities, good coaching and motivated players.

Mitchell, a former pro player in the old North American Soccer League who also played 55 games for Canada’s national team before becoming a coach for the Vancouver Whitecaps as well as Canada’s U-20 and senior men’s national teams, said the development of young players has come a long way.

“It used to be people were all doing their own thing,” Mitchell said. “In this day and age the kids have to start early and there is a good development system in place.”

The landscape for those systems has also become more crowded, with club programs competing with each other and a growing number of school-based academies for top players. Mix in the training hubs established around the province by the Whitecaps, from Trail to Terrace, and opportunities abound.

“If you’re a player or a parent, there’s a lot of places you can be on any given night,”Mitchell said.

It’s little wonder, then, the province would eventually produce a phenom like Alphonso Davies, who broke in with the Whitecaps’ Major League Soccer team when he was just 17 years-old after playing in the team’s academy system for several years and was recently sold to international powerhouse Bayern-Munich of Germany’s top professional Bundeslige for $20 million.

Mitchell said the emergence of Canadian players onto the international stage is a boon for driving soccer forward in the country.

“It’s huge to have homegrown players,” he said.

That’s because the excitement over a player like Davies filters down to the grassroots level, inspiring more kids to play and volunteers to coach.

But it’s the creation of a positive experience that keeps them progressing, Mitchell said.

That’s something he strives to instil in his coaches who work with CMFSC’s 3,500 recreational and competitive players.

“The things you learn when you’re part of a team like fitness, teamwork and camaraderie, those are great life lessons you can learn through sport,” Mitchell said. “That’s what keeps kids coming back.”

It’s also what brings many of them back as volunteers after their playing days are over, giving back to the sport from which they’ve derived so much.

That’s helped create a lineage of achievement in CMFSC which has produced top alumni like Sara Maglio and Alfredo Valente who both played professionally, and Kadin Chung, who’s trying to work his way into Germany’s Bundeslige with FC Kaiserlautern.

CMFSC female players who will be playing at post-secondary institutions in the fall include:

• Nikki Gregory, and Jashan Sandhar: University of the Fraser Valley

1544
Letter: New Coquitlam residents need to adapt to living on the edge of wilderness
1225
Dentists, midwives and more approved to assist in B.C. vaccination clinics
1086
‘What are they waiting for?’ asks Coquitlam parent worried about long wait for school isolation letter
956
Parent says Port Moody minor hockey not giving a full account of its COVID cases
892
New garden centre hopes to take root in Port Moody