New boss has a new plan for BCHL

The BC Hockey League’s season begins on Friday. But the business of the league is a work in progress. And the new man charged with guiding that business says it’s time to take the BCHL to a new level.
Sep 4, 2018 3:34 PM By: Mario Bartel 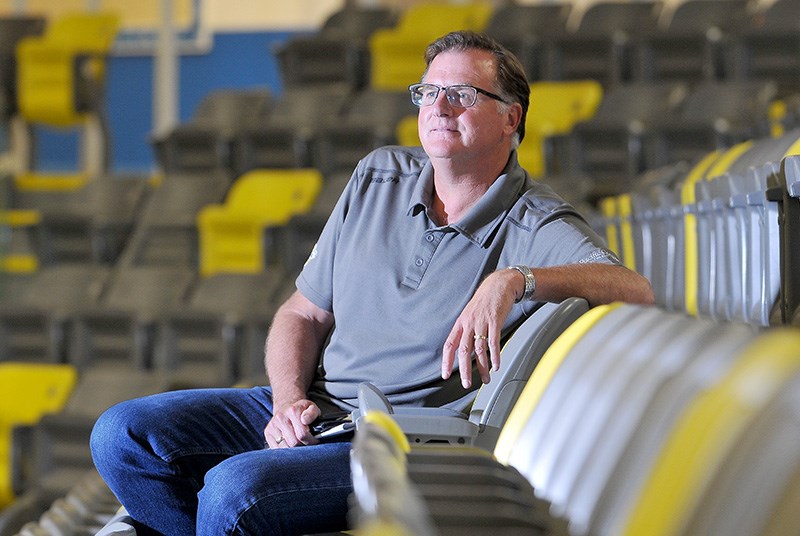 The new commissioner of the BC Hockey League, Chris Hebb, is bringing his background in media and social marketing with the Vancouver Canucks and Maple Leaf Sports and Entertainment in Toronto to boost the league's profile and make more people aware of the quality of its hockey players.MARIO BARTEL/THE TRI-CITY NEWS

The BC Hockey League’s season begins on Friday. But the business of the league is a work in progress.

And the new man charged with guiding that business says it’s time to take the BCHL to a new level.

“Junior A has spun its wheels,” said Chris Hebb, who was appointed the BCHL’s new commissioner last June. “The hockey has improved, but the business has not.”

Hebb, a former broadcaster, comes with a big league pedigree. He spent 11 years with Orca Bay Sports and Entertainment, launching the Vancouver Canucks and Grizzlies as well as GM Place into the digital age. He then moved to Maple Leaf Sports and Entertainment where he was in charge of broadcast and digital properties for the Toronto Maple Leafs, Raptors and Toronto FC of Major League Soccer as well as the American Hockey League’s Toronto Marlies.

For the last five years, Hebb ran his own consulting business, developing business strategies for sports organizations like Canada Soccer, the Edmonton Oilers, Hockey Canada and Curling Canada. He said it’s no longer good enough for hockey teams in Canada at any level to just throw open the doors to their arenas and expect people to show up because, well, it’s hockey.

“The model that we’re selling hockey in Canada so this should be easy, no longer exists,” Hebb said. “There is so much competition for the mind share of the sports fan, whether it’s video games or fans who just watch on television.”

Getting fans to buy tickets to BCHL hockey games is a matter of getting them to buy into the league and the value it offers them, as entertainment, and as a stepping stone for the hockey aspirations of young men, Hebb said.

That’s especially critical in Metro Vancouver, where most of the league’s potential sponsors and business partners are headquartered, but where competition for fans and attention is fiercest.

“We need to be successful here,” Hebb said.

The president of the Coquitlam Express couldn’t agree more.

Mark Pettie has seen fans struggle to support his team as the Express have endured consecutive losing seasons since winning the Fred Page Cup  in 2014.

“We’ve had a tough couple of seasons,” Pettie said. “We’ve got to make sure we’ve got a good product.”

The realization the Express could no longer ride the coattails of a league championship it won four years ago led to an extensive rebuild of the organization. A new coaching staff, led by Jason Fortier, was brought in last November to improve the on-ice product and Joel Rockwood was hired as the team’s director of sales and marketing.

“We’ve made a huge commitment,” Pettie said. “We want people to know who we are and to come out to our games.”

But achieving that is more challenging — yet easier — than ever, said Hebb, who spent the months since his appointment driving around the province to visit every franchise and spend time in each community.

Easier because teams have more tools at their disposal like social media to tell their stories and engage directly with fans. But more challenging because many teams haven’t yet harnessed the power of those tools to know much about their fans.

“We’re not in the ticket selling business, we’re in the data business,” Hebb said. “You want to build a database of who came here so you’re not scattergunning and hoping somebody that’s a ballet fan becomes a hockey fan.”

Hebb said the BCHL has to use digital technology to spark interest and then step back to allow those conversations to evolve and grow organically.

“We need to realize what people really do is talk to each other,” Hebb said. “You get into a conversation with your fan base, you treat them as one of the family and you make sure you’re delivering assets to them they couldn’t get otherwise.”

And if the league’s 17 teams are doing their jobs properly what they might start hearing fans talking about are the growing numbers of players making it to the NHL from college programs and the role the BCHL has in making that happen, as well as the bonafide bloodlines of recognizable former NHL stars like Rod Brind’amour and Scott Niedermeyer who are finding their way into the league.

“This is not minor hockey,” Hebb said. “This is a place where a kid can have a dream actually come true through a route that will also prepare him for university.”

• As part of its commitment to engage better with fans and make it easier to start conversations, the BCHL has rebranded all of its social media channels with a new common handle — @GoBCHL. The new tag replaces various ones that were used on individual channels like Twitter, Facebook and Instagram.

“The ‘GoBCHL’ tag has energy and signifies our desire for all of our teams to achieve as much as possible each season,” said the BCHL’s director of communications, Brent Mutis, in a press release.

The Express will open their regular season with a new captain. Coquitlam’s Troy Robillard will wear the C on his jersey after being as assistant captain last year.

Express coach Jason Fortier said the choice was an easy one to make.

“He is a motivated athlete that has the character and discipline to be successful in life,” Fortier said.

Robillard, 21, is in his final season in the BCHL. He joined the Express when he was 17, after playing in the Coquitlam Minor Hockey Association, then a season in Kelowna’s Pursuit of Excellence program and another with the Vancouver NE Chiefs of the BC Major Midget League.

A defenceman, Robillard has 33 points in the 120 games he’s played for the Express.