Pre-game barbecues, post-game skates with the players, maybe even a new mascot are some of the experiences fans of the Coquitlam Express can expect under the new ownership of hotelier Fayaz Manji.
Oct 16, 2019 11:49 AM By: Mario Bartel 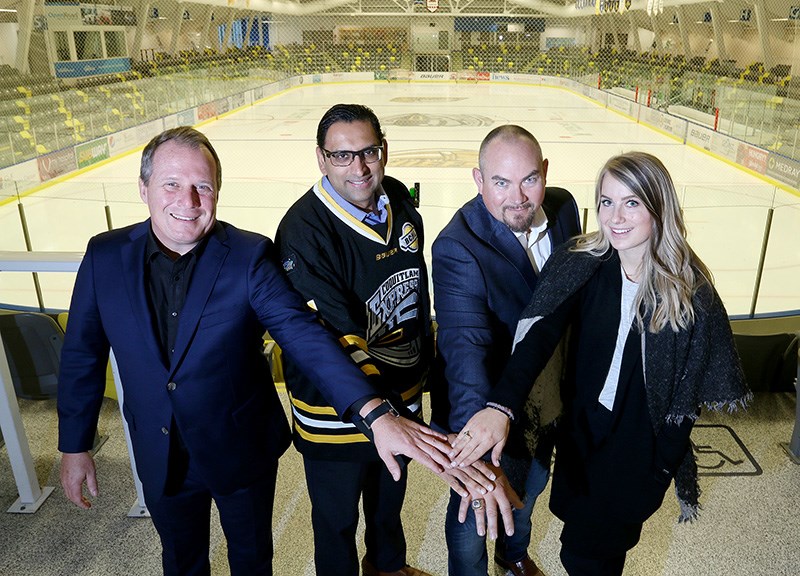 Pre-game barbecues, post-game skates with the players, maybe even a new mascot are some of the experiences fans of the Coquitlam Express can expect under the new ownership of hotelier Fayaz Manji.

The BC Hockey League announced last Friday the team had been purchased from its previous owners, a group of ex-pat hockey players living abroad.

Manji said creating a positive experience for fans, players, volunteers and sponsors will be a touchstone of his stewardship of the team that was founded in 2001, relocated to Burnaby for five seasons, while the Poirier Sport and Leisure Complex was refurbished and enlarged, then returned to Coquitlam in 2010. He said building a chain of hotels — including Ramada, Super 8, Days Inn and Choice properties — in British Columbia, Alberta, Ontario, Quebec and Prince Edward Island has given him the business and marketing chops to take the franchise to the next level. And maybe even offer some friends-and-family discounts when the club hits the road and needs overnight accommodation.

“There’s more to it than just the game on the ice,” Manji said, adding discussions have already started to forge stronger connections with Poirier’s other major sporting tenants, the Coquitlam Adanacs junior and senior lacrosse teams, as well as with the city’s minor hockey association.

Manji, who lives in Burnaby, said initial negotiations to join the former ownership group as a local investor started last spring, then quickly progressed to the possibility of a wholesale acquisition during the Express’ playoff series against the Prince George Spruce Kings. He assembled a team with hockey knowledge and business skills to assess the market’s potential. It included: Ron Veit, a goaltending coach who’s worked with teams in the BCHL, Western Hockey League and the UBC Thunderbirds as well as his own academy; Dave McLellan, who coached the Express when the team was in Burnaby; veteran women’s hockey player, Allanah Kedra, along with the team’s president, Mark Pettie.

Manji said he liked what he heard from his advisors, as well as from the league’s sophomore commissioner, Chris Hebb.

“We can show the community what they really have here,” he told The Tri-City News.

McLellan, who will be the team’s new president while Pettie assumes the role of vice-president, said his own experience with young people shows him there’s untapped potential to increase support for the Express.

“The kids go home and play video games, so the idea is to create an event that the kids want to go to so they can spend time with their friends,” he said.

And the Express will have time to do that, as Manji immediately negotiated a five-year renewal of the team’s lease at Poirier.

He said while owning a Junior A hockey team is rarely a profitable exercise, it’s a good fit with his other community-building efforts at Canucks Place and the BC Women’s Hospital. He’s also an avid floor hockey player and coach.

Manji said the BCHL’s emphasis on creating educational opportunities for its players is especially enticing.

“It represents a high level of hockey, but also a chance to get an education,” he said.

Veit, the team’s new alternate governor as well as a special consultant to the owner, said the Express’ improved play in the past couple of seasons is already making the team a coveted destination for young up-and-coming players looking to catch the attention of college scouts and Coquitlam’s location in the heart of Metro Vancouver makes it easy for those scouts to find them.

Pettie said having more “soldiers on the ground” locally will help with efforts to find new sponsors as well as volunteers to support the team.

Meanwhile, Kedra, who’s the new manager of business operations for the Express, is already working to fill promotional slots in the team’s white board calendar. Those include the pre-game barbecues, volunteer appreciation events, player appearances at community events that all start this Sunday with its annual “Pink in the Rink” game to promote awareness about breast cancer. The team will host the Powell River Kings at 3 p.m.

New sponsor signs on for BCHL

The Express, as well as the other teams in the BCHL, will be sporting a new logo on the backs of their jerseys after the league signed a multi-year agreement with Shaw Communications.

The telecommunications company will become the title sponsor of the league’s playoffs, that begin in March. It will also present a monthly community hero award to a player nominated by fans for their achievements in the community.

“The BCHL is an integral part of communities across B.C., bringing together fans and players every week,” said Shaw’s vice president of external affairs, Chethan Lakshman, in a press release.

In addition to small logos affixed to the back of team sweaters, the new association will also be recognized with board ads in the rinks and on the BCHL website.