Dan Cioffi knows he won’t get his first win as the new head coach of the Coquitlam Express until December at the earliest While that might cause sleepless nights and job security stress for most newly-minted bench bosses, it’s the reality of a BC Hoc
Sep 9, 2020 7:00 AM By: Mario Bartel 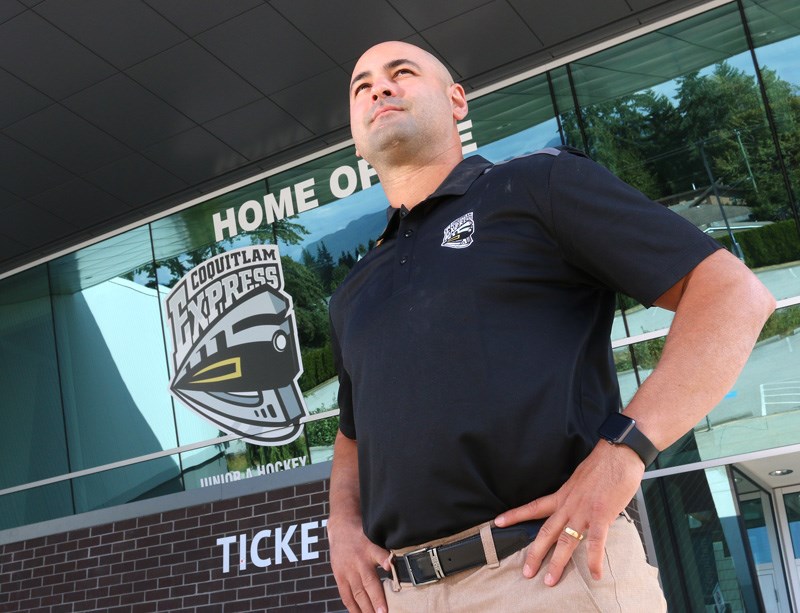 Because of the COVID-19 pandemic, Dan Cioffi's first season as head coach of the Coquitlam Express won't look anything like he's used to.MARIO BARTEL/THE TRI-CITY NEWS

While that might cause sleepless nights and job security stress for most newly-minted bench bosses, it’s the reality of a BC Hockey League season delayed by at least three months because of the COVID-19 pandemic.

Not that Cioffi will be kicking back eating bonbons in the Express offices across the street from the Poirier Sport and Leisure Complex. In fact, the rookie BCHL head coach, who served previous stints in the league as an assistant coach with the Burnaby Express for three seasons and another as an associate coach with the Salmon Arm Silverbacks in 2011, is going full speed ahead in his preparation for the coming campaign even as its certainty remains more a hope than a locked-in date on the calendar.

“It’s day-to-day, week-by-week,” Cioffi said of the prospect competitive games will be played by December as the number of coronavirus infections in the province begin climbing again. “We’ve got to look at the optimistic side.”

To that end, the Express’s four American players arrived at the end of August to serve their 14-day self-isolation period in the basement suite of the team’s billeting coordinator. The rest of the players will have their fitness testing on Sept. 13 and then hit the ice for the first time as a unit the following day.

From there, they’ll settle into a practice routine that consists of working on individual skills on Mondays, competitive drills on Tuesdays, systems and team play on Wednesdays and some sort of team and individual competition on Thursdays. And so on potentially until December, although the league is hoping it will receive permission from the provincial health authority to schedule regional exhibition games beginning in October.

Initially, Cioffi said, players’ motivation will be high. Nine are returnees from last year’s squad that finished atop the regular season standings and swept the Langley Rivermen in the first round of the playoffs before the campaign was abruptly shut down because of the public health crisis. The rest are eager to prove they belong in their company.

But as their extended training camp wears on, Cioffi said he expects he’ll have to get creative. He said he’ll look to his assistants Ryan Hollweg and Justin Rai to bring their voices to the ice to keep it fresh, and he’s had discussions with former pros Mike and Mark Santorelli to help out as well.

“We’ve got to look at different ways to help players grow,” Cioffi said.

Some of that will even happen off the ice, as Cioffi plans to bring in an expert on mental fitness to work with players on issues away from the rink, like their daily habits, the amount of sleep they get, water they drink, how much time they spend in front of screens.

Cioffi said such ideas have always been in the back of his mind, but inevitably were overwhelmed by the season’s grind of preparing for and playing games. With those not happening for awhile, he has the luxury of putting them into action.

“It does allow us to step back and see what can be done differently,” he said.

But, Cioffi added, he has to be careful not too make things too complicated.

“You can overthink things,” he said. “At the end of the day, athletes and coaches want to go, go, go.”