The biggest problem facing the Coquitlam Adanacs as they head into their Western Lacrosse Association season that begins Saturday at 7 p.m. when the Burnaby Lakers visit the Poirier Sports and Leisure Complex isn’t new.
May 22, 2019 2:00 PM By: Mario Bartel 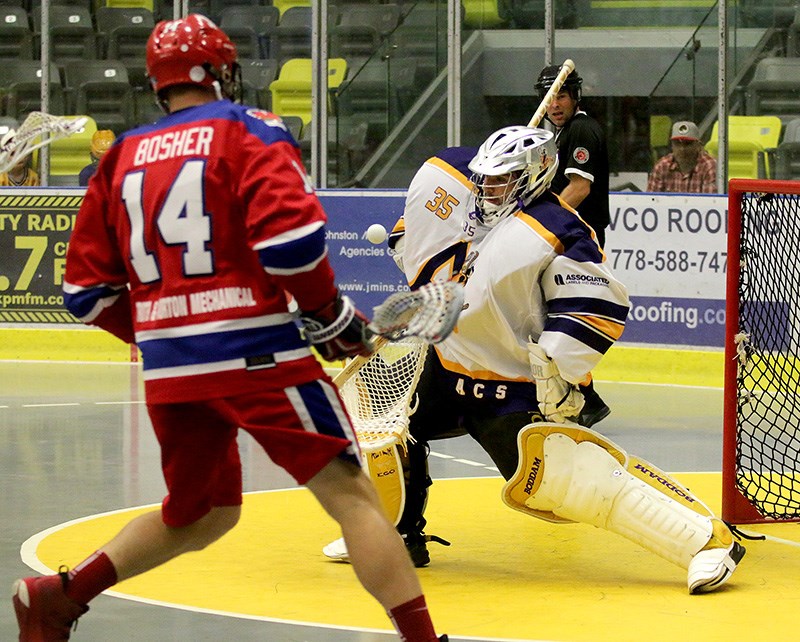 The arrival of standout junior goalie Christian Del Bianco to the lineup of the Western Lacrosse Assocation's Coquitlam Adanacs will have to wait until after the conclusion of the National Lacrosse League's championship series between the Calgary Roughnecks and the Buffalo Bandits.

The biggest problem facing the Coquitlam Adanacs as they head into their Western Lacrosse Association season that begins Saturday at 7 p.m. when the Burnaby Lakers visit the Poirier Sports and Leisure Complex isn’t new.

But the light at the end of the tunnel is.

His name is Christian Del Bianco.

And Adanacs general manager Mike Petrie is confident the WLA’s first overall draft pick, who led the junior incarnation of the team to a Minto Cup national championship last year, will be the key component in a rebuilding effort to get the team back into the league’s playoff picture for the first time since 2013.

That is, when Del Bianco gets to town.

Because, like several other highly-regarded Adanacs’ players, Del Bianco will be unavailable for the beginning of the season. Some are still playing professional field lacrosse in the United States, while the 21-year-old goaltender is playing for the championship of the indoor National Lacrosse League. Del Bianco’s Calgary Roughnecks lead the Buffalo Bandits 1-0 in the best-of-three series with the second game scheduled for Saturday and the third — if necessary — set for the following week.

No worries, said Petrie. With 12 new players set to hit the floor at Poirier there’s plenty of reason to be optimistic.

“We will be better,” Petrie said.

Putting truth to those words won’t just fall on the expansive, padded shoulders of Del Bianco. Joining him on the Adanacs’ roster sheet will be Del Bianco’s teammate in Calgary, Wes Berg. The 26-year-old forward, who’s from Coquitlam, is coming home after amassing 139 points in 44 games over four seasons with the Oakville Rock in Ontario’s Major Series Lacrosse league. And while Petrie expects him to play only part time, he’ll be “a tremendous upgrade for our offence.”

Other new faces include the Dickson brothers — Carter and Adam — as well as Luke Gillespie.

Petrie said there could be some pleasant surprises from other players headed west to the Adanacs from leagues back east.

The bolstered lineup, he said, means Adanacs’ coach Bob Bell will putting a more fast-paced, transition game plan to his whiteboard, confident that should those intentions break down, Del Bianco will be more than capable to save the day.