The only constant in high school sports is change. That’s especially true this year for senior girls' basketball teams in the Tri-Cities.
Dec 11, 2019 7:00 AM By: Mario Bartel 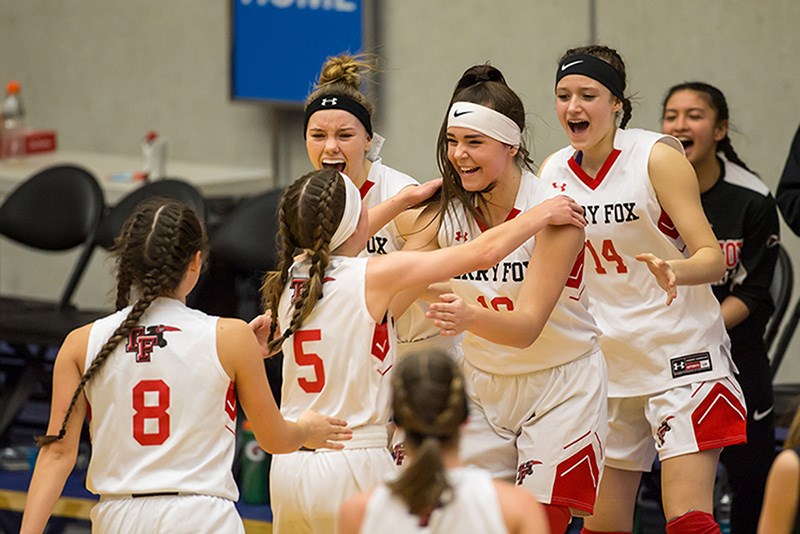 Many of the girls who celebrated the Terry Fox Ravens junior girls basketball championship last season are playing for the school's senior team this season.TRI-CITY NEWS FILE PHOTO

The only constant in high school sports is change.

That’s especially true this year for senior girls' basketball teams in the Tri-Cities. The senior players who ensured schools like Riverside and Heritage Woods secondary spots in the provincial championships the past couple of years have moved on to post-secondary athletic pursuits.

In their wake has come a new generation of young, feisty upstarts, many with histories of success at the junior level or on provincial teams.

But how they’ll measure up at the senior level, against bigger, stronger and more experienced players is still to be seen.

The Terry Fox Ravens senior girls' team has a history of success — as juniors.

The core of this year’s senior squad is made up of many of the players who went undefeated last season and won the provincial junior championship, 76-36, over the Kelowna Owls — the largest margin of victory ever in the final.

They may be young, said coach Mike Carkner, but they’re also fearless.

“They believe in themselves and they’re confident on the court,” he said. “This is a very gritty, determined group of girls.”

They’ve already proven that by recently winning the Big Ticket tournament and, this week, they’re testing their mettle at the prestigious Howard Tsumura Invitational at the Langley Events Centre.

Carkner said his charges are capable in every facet of the game.

“We have shooters, slashers, drivers, lockdown defenders, so we are highly skilled and versatile,” he said. “We have a lot of depth.”

Atop that pool is Grade 10 point guard Cerys Merton, who was the most valuable player at last year’s junior provincials. Guard Lauren Clements and forward Emily Sussex, also in Grade 10, were provincial all-stars, while Merton, Clements along with Alisha Weloy and Ana Misic all played for the B.C. U15 provincial team.

Still, with all that youth, Carkner said he expects there will be some bumps on the path to success — even if success doesn’t come for another season or two.

“There will be some ups and downs during the season,” he said. “This is a development year for our girls and we want to expose them to the best competition so they can learn and grow.”

The Kodiaks have already seen their stock rise from an honourable mention in the pre-season poll to sixth after the team finished fourth at the Big Ticket tournament in Abbotsford.

While senior stalwarts Rachel Tomlinson, Breona Martin and Emily Instant have moved on, this year’s Grade 12 players are ready to pick up the ball.

They include: point guard Jenna Griffin, whom Tomlinson said has “exceptional ball handling and shooting skills;” guard Maddy Counsell, a “hard-nosed defender” with scoring touch around the basket; and centre Kiara Kozak, who can dominate the interior and block shots.

A third-place finish at the Big Ticket tournament elevated the Rapids to fifth in the poll from seventh before games were being played in earnest.

To carry that early sign of promise through the season, longtime coach Paul Langford said, players moving up from the school’s junior team that finished third at last year’s provincials will have to fill the void left by graduating seniors Jessica Parker, Alanya Davidgnon, Tessa Burton and Adrienne Willems.

Scoring by committee will be the order of the season for the Centaurs, who have a new coach — Stephen Bruyneel — and only one returning starter from last year’s senior team: guard Ope Balogun.

“We are a young, developing team that works hard on defence and brings a lot of energy to our games,” Bruyneel said.

With the graduation to Simon Fraser University of last year's leading scorer, Grace Killins, Centennial will look for buckets from Grade 10 guard Mollee Jones, who was the junior team’s most valuable player last year largely because of her skill from beyond the three-point arc; Grade 11 post Natasha Spees, who can score from the inside and pull down rebounds; and Grade 11 guard Grace Tullis, a solid outside shooter.

Showing them the way, Bruyneel said, will be seniors Katie Dristas and Anoushka Naiker.

Bruyneel said his team will be in tough in such a competitive league.

Blue Devils coach Craig Percevault concedes what his team lacks in skill, it will have to compensate for with heart and a “fantastic attitude.”

How far that gets them will be largely determined by the leadership provided by senior players like Paige Lidiard, Georgia Hamnett and Maiya Callister.

Percevault said Lidiard is the team’s “floor general,” Hamnett its “best guard,” and Callister can defend against opponents’ toughest players.

“The team this year is a scrappy team,” Percevault said, adding the players are still working on their basketball IQ.

With the school’s senior boys' team on hiatus, the basketball spotlight at Gleneagle secondary shines on the girls' squad, which is back in the Tier 1 league after playing Tier 2 last season.

What it will illuminate, said first-year coach Katherine Bilan, is a plucky group of seven undersized players who can’t afford to take a game off because the bench is so short.

Unlikely to see much time on that bench will be Grade 11 guard Rachel Woods, the Talons’ most experienced player. Bilan said she’ll look for Woods’ calm demeanour and controlled play to motivate other players.

“She’s a quiet but effective leader,” she said.

Supporting Woods will be Grade 12 forward Megan Kennedy, whom Bilan called a hard worker with a stubborn steak to succeed, and Grade 11 forward Nicole Comrie, whose athleticism overcomes her lack of experience on the court.

• The Port Moody Blues did not respond in time for deadline.