Port Coquitlam pitcher Curtis Taylor will be headed to the Tampa Bay Rays spring training camp in Port Charlotte, Fla., Feb. 13, as a non-roster invite. He is ranked among the top 50 young prospects for the Major League Baseball team.
Feb 1, 2019 1:48 PM By: Mario Bartel 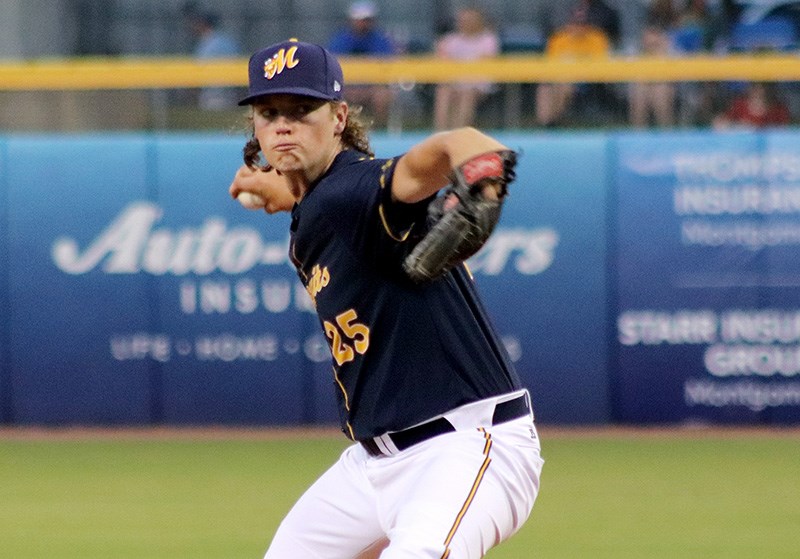 Port Coquitlam pitcher Curtis Taylor will be headed to the Tampa Bay Rays spring training camp in Port Charlotte, Fla., Feb. 13, as a non-roster invite. He is ranked among the top 50 young prospects for the Major League Baseball team.

That’s a long way, and many degrees warmer than when Taylor’s dad, Wes, used to haul the family’s TV into the garage of their Port Coquitlam home in the fall so he could enjoy watching his beloved New York Yankees battle for the playoffs and then the World Series like he was in the same chill air as Yankee Stadium.

The experience instilled in Curtis a love for the game and set him on a path that may yet let him experience fall baseball in New York City for real. From the pitcher’s mound.

Taylor, 23, was drafted in the fourth round of the 2016 MLB draft by the Arizona Diamondbacks, and he’s been rising through baseball’s minor league ever since.

The 6’6” right-hander honed his fastball from atop the mound at Coquitlam’s Mundy Park for the Coquitlam Reds of the BC Premier Baseball League. His 91 mph heater landed him a stellar stint at the University of British Columbia Thunderbirds, where he filled out to 225 lbs and increased his velocity to 96 mph.

Those numbers caught the attention of pro scouts and the Diamondbacks made Taylor the highest draft pick out of UBC since former major league ace Jeff Francis was selected in the first round of the 2002 Major League draft by the Colorado Rockies.

Taylor opted to turn pro instead of returning to UBC for his senior year. He took his first step on the ladder to the Major Leagues in Hillsboro, Ore., where the Hops are the short-season A-League affiliate of the Diamondbacks. He pitched 16.1 innings in 17 games as a reliever, allowing only four runs and earning one win along with three saves.

The next season he was off to Geneva, Ill., to play full-season A-ball with the Kane County Cougars where coaches groomed him to be a starter. In 13 starts he won three games, lost four and allowed an average of 3.32 earned runs a game.

But the expanded role took a toll on Taylor’s shoulder and he missed the last month of the season with an impingement injury, where the rotator muscles get too loose and become trapped between the joint.

It was the first major injury of his career, and Taylor said he was terrified.

It was also Taylor’s first taste of the drudgery and hard work of rehab, living in a hotel room near the Diamondbacks’ training facility near Scottsdale, without a car, working in the gym every day to strengthen the joint.

“Rehab is a tough place to be,” Taylor said. “All your focus is on getting your arm better. I worked hard to stay positive.”

Then, on Nov. 30, 2017, Taylor experienced another first. He was traded to the Tampa Bay Rays for an established big leaguer, Brad Boxberger.

Initially, Taylor said he wasn’t thrilled with the move. But once he got to Tampa, and was able to talk to the coaches who wanted to return him to his customary role as a reliever, he was excited to take the next step in his journey.

That started in Port Charlotte, Fla., where he got three wins and two saves in the eight games he appeared in during the month he was there before getting promoted to the Rays’ AA affiliate in Montgomery, Ala.

In 30 games with the Biscuits, Taylor pitched 60 innings, earning three wins, four losses and six of eight save opportunities. More importantly, he was learning what it takes to be a pro baseball player.

“One of the biggest things is staying calm mentally,” he said. “You can’t get too high or too low. If you pitch bad you have to accept you’ll have bad days.”

He also got a sense of what it means to be a pro baseball player in the Deep South, making appearances in the community on behalf of the team, volunteering for charity work, interacting with fans.

“They’re really into it, they pay attention to the game,” Taylor said of the scrutiny. “You have to carry yourself as a reasonable, nice, kind person.”

A slight injury to Taylor’s elbow late in the season meant he wasn’t able to play in the Arizona Fall League, a prestigious off-season circuit to which only baseball’s top prospects are invited. But he did get to spend some time at a special pitching camp put on by the Rays in Florida where coaches were able to analyze his pitching with special high-speed cameras that track how the ball spins and moves vertically and horizontally.

Taylor said the experience was invaluable as he works to expand his pitching repertoire beyond his fastball and slider.

“It gives you instant feedback and you can compare it to big leaguers,” he said. “It was the best thing I’ve ever done as a baseball player.”

Taylor spent most of his off-season in the Lower Mainland, working out every day at his old stomping ground at UBC to “get stronger and trim body fat.”

And when the baseball playoffs and World Series were on TV last fall, he watched them from the warm comfort of his living room.

“Watching games on TV, you see guys you’ve played against and it’s exciting,” he said. “Hopefully that will be me in a year or two.”