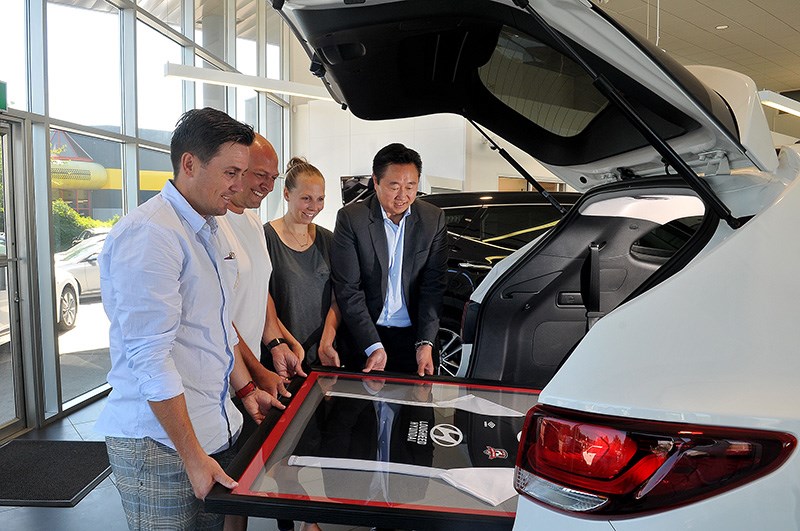 The Port Moody Soccer Club is kicking up its game.

A new sponsorship deal with Lougheed Hyundai will allow the association to provide better resources for its coaches, funding for its approximately 1,000 players to participate in more tournaments, as well as support for unique programs like adaptive soccer, said the association’s president, Matthew Campbell.

It also means new kit for everyone in the association, which is the smallest in the Tri-Cities.

But that diminutive stature won’t be a barrier anymore, said Campbell.

The sponsorship, which consists of a new car the association will raffle off with all proceeds going to its soccer programs, puts Port Moody soccer in a better position to compete for players and top coaches against larger, more established programs like Coquitlam Metro-Ford.

Howard Chiang, the dealer principal at Lougheed Hyundai and its neighbouring dealership, Lougheed Acura, said the sponsorship is a way to give back to the community where he and his family have lived for 22 years.

1722
Letter: New Coquitlam residents need to adapt to living on the edge of wilderness
890
‘What are they waiting for?’ asks Coquitlam parent worried about long wait for school isolation letter
836
Dentists, midwives and more approved to assist in B.C. vaccination clinics
754
Parent says Port Moody minor hockey not giving a full account of its COVID cases
715
New garden centre hopes to take root in Port Moody