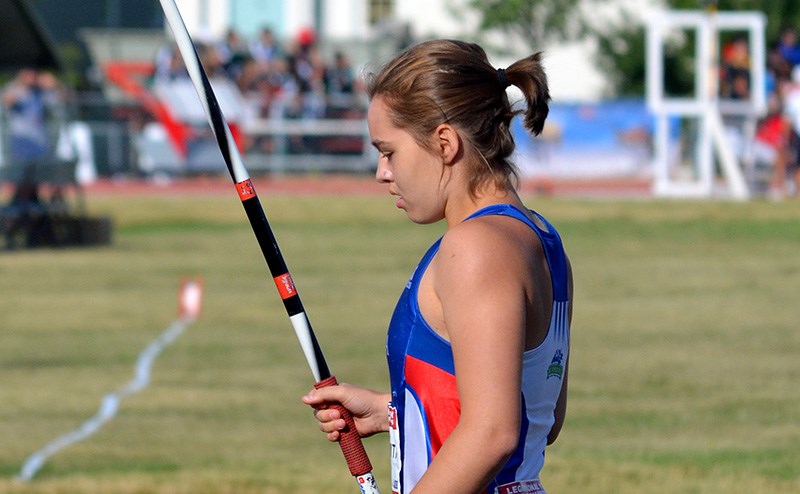 PHOTO CONTRIBUTED Jenvieve Patry-Smith, who likes to go by the name Jv, prepares to throw the javelin at the Legion National Track and Field Championships in Brandon, Man. earlier this summer. She won a gold in her age group and achieved a personal best throw of 46.70 metres. She also won a bronze in shot put at the event.

Nobody puts Jv in a corner.

Whenever Jenevieve Patry-Smith’s — she likes to go by the name Jv — coaches suggest the 16-year-old thrower narrow her athletic focus, she goes out and gets a good result in one of the disciplines they’d like her to consider dropping.

“I like competing in all four,” says Patry-Smith of her love for javelin, hammer, discus and shot put. “I just enjoy throwing and they all have different styles and technique.”

This summer, her stubborness and belief in her abilities paid dividends.

Patry-Smith, who lives in Port Moody, attends Grade 12 in the I.A.B. program at Ecole des Pionniers-de-Maillardville, competes for Terry Fox secondary in Port Coquitlam and trains in Burnaby with the Royal City Track and Field Club, won a gold medal in javelin and bronze in shot put for her age group at the Legion Track and Field Nationals in Brandon, Man., gold in the discus at the Youth Francophone Games in Moncton, N.B., and gold in discus, silver in javelin and bronze in shot put at the BC Athletics Jamboree.

Patry-Smith concedes competing and training for all four throwing events comes with a cost. Most of it time.

After traveling by transit for a half hour to Burnaby Central secondary school where the Royal City club has its throwing facilities, Patry-Smith works with her training group for an hour then stays an extra hour to work on another discipline. Luckily her dad, Kevin Smith, is one of her coaches, and she can then catch a lift home with him. She does that three days a week, then weight trains the other days.

And now that school has started again, it makes for a long day.

“I do homework when I have time,” Patry-Smith says. “I try to get as much done as I can in class.”

Patry-Smith says while the results she achieved at the Legion nationals and the BC jamboree were gratifying, competing at the Francophone games was special.

“It was nice to be surrounded by other French athletes,” she says. “Outside of school there isn’t much French here, so it was kinda cool to have French-speaking people around.”

Patry-Smith knows she’ll eventually have to specialize in one of her throwing disciplines, especially if she’s to pursue athletics during her post-secondary years.

“When I train for other throws, I’m taking time out of other throws,” Patry-Smith says. “Every year that goes by, it’s harder to keep all the other events.”

And when it comes time for Patry-Smith to make her choice, she says it’s going to be on her terms.

“Every year I want to throw further and further, and do my best to see where it takes me.”