Port Coquitlam snapper forges his own path in football

Terry Fox grad was the youngest player on the University of Calgary Dinos team that won the Vanier Cup last November
Apr 22, 2020 6:00 PM By: Mario Bartel 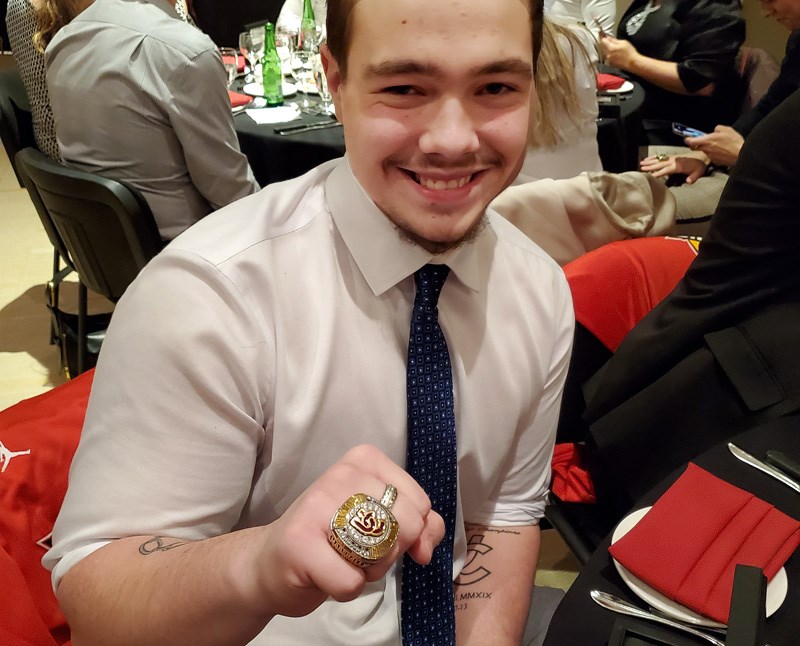 For Port Coquitlam’s Chaz Marshall, expectation and reality are rarely on the same trajectory.

As a 17-year-old freshman for the University of Calgary Dinos, the Terry Fox secondary grad was expecting to hone the craft of his position as the team’s long snapper for a season or two before being thrown into the brink against the bigger, older men of Canada West football.

But in the fourth quarter of his first game, against the University of Alberta, Marshall hustled downfield after snapping the ball to Dinos’ punter Carson Dueck to recover a fumble that sealed his team’s victory over their arch-rivals in Edmonton.

He was named the Dinos’ special teams player of the game, launching his post-secondary football career that culminated with the school’s fifth Vanier Cup national championship last November in Quebec City.

Now home early because of the COVID-19 pandemic and working out on his own as best he can when he would normally be getting ready for spring training camp in late April, Marshall can reflect on a whirlwind 18 months since he lost his last game as a high school senior in the 2018 Subway Bowl semi-finals.

“I am now part of a band of brothers forever connected to this ring and what it represents,” Marshall said of winning a championship as the Dinos’ youngest player.

But that ring that was presented to Marshall and each of teammates in early March is also a symbol of his own can-do attitude.

When Marshall was playing community football in Coquitlam and New Westminster, his friends scorned the lineman position as a demotion from more glamorous placements on the gridiron like tight end. He seized the opportunity.

When told he was too small to be a centre, the 5’5” Marshall studied the position’s blocking schemes and perfected his technique, eventually becoming a starter for the Ravens that made it to the 2017 Subway Bowl provincial high school championship game.

When a growth spurt never got him to the behemoth status normally expected for his position and college recruiters looked past Marshall’s diminutive stature, he decided to get smaller. He trimmed 30 pounds from his now 6’ frame and worked with a personal trainer to improve his strength and speed to become a long snapper that specializes in hiking the ball back through his legs to the punter or placekicker several yards behind the line of scrimmage.

That earned Marshall a scholarship to U of C, where, he said, he’s been diligently applying the lessons of hard work, dedication and opportunity that got him there.

“I just wanted a chance,” said Marshall of making an impression in his first year amongst the Dinos’ 105 players. “I was ready to take advantage of it.”

He got ready by attending specialty camps in Washington and Oregon where coaches could teach him the specific techniques on long snapping. At home, he worked with BC Lions long snapper Mike Benson to continue his improvement.

“I was all in to become a long snapper at the university level,” he said of his dedication to task.

But converting that single-minded determination to an actual scholarship offer took a team effort, Marshall added.

While trainer Kevin Phillips, who’s worked with pro football players like the BC Lions’ Lemar Durant, got Marshall ready physically, former NFL player Chuck Herman served as a football mentor to guide his young protege through the rigours of the recruiting process in both the United States and Canada.

It all came together at a special camp at Washington State University where Marshall more than held his own against state and nationally-ranked long snappers — in fact, he was named the day’s top long snapper.

Suddenly Marshall was on the radar of recruiters more familiar with their home-grown talent south of the Canada-U.S. border where his position is more highly-regarded and specifically coached.

But it was the University of Calgary that presented the best fit, Marshall said.

“As a team and school, we never quit and felt like we could overcome every adversity thrown at us,” he said.