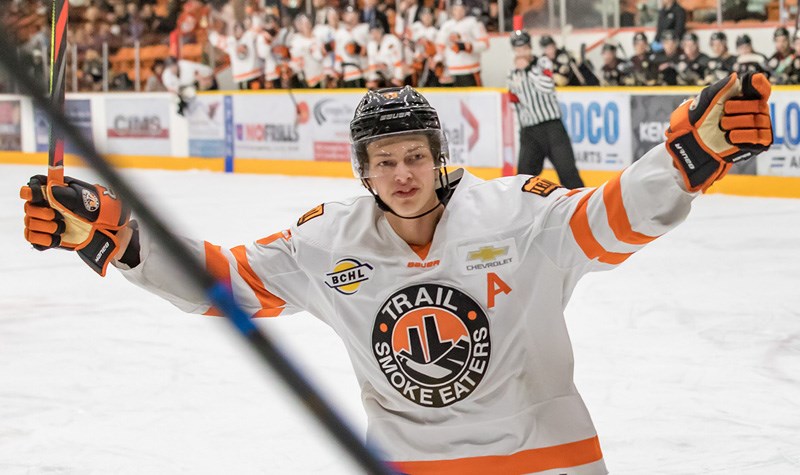 Port Moody's Kent Johnson, who won the BC Hockey League scoring race last season, collected four assists and a goal in his debut weekend with the University of Michigan Wolverines.

The freshman left winger had four assists in the team’s season opening 8-1 win over Arizona State last Friday, and on Sunday he scored his first collegiate goal when the Wolverines shut out the Sun Devils, 3-0.

Of course, fans of the BC Hockey League already knew that, as Johnson capped his junior career with the Trail Smoke Eaters last season by scoring 41 goals and 60 assists to easily win the league’s scoring title.

The 18-year-old, who played his minor hockey in Port Moody and then the North Shore Winter Club, is projected to be a coveted selection in the first round of the 2021 NHL Entry Draft. Some observers have compared him to Toronto Maple Leafs’ superstar Mitch Marner.

In Michigan, Johnson is teamed on a line with another highly-touted freshman, Matthew Beniers, who scored 41 points for the U.S. national U18 A team last season.

“They complement each other well,” Pearson told The Daily.

The Wolverines, like all teams in its Big 10 conference, are playing a compressed schedule after an extended training camp without exhibition games because of the COVID-19 public health emergency. On Nov. 6, the University of Michigan announced all undergraduate classes for the winter semester will be online only because of soaring infection rates on campus.

Several schools, like Union College and Rensselaer University, and the entire Ivy League, cancelled their seasons because of the pandemic. On Tuesday, Colorado College paused all activities for its hockey team for 14 days after one of its players tested positive for the virulent contagion.