Port Moody soccer player Hamish Ogden is hoping his luggage on the return flight from Charlottetown, P.E.I., will be a lot heavier than when he and his Mountain United U17 team arrived in a quest to bring home a national trophy. The B.C.
Oct 10, 2019 8:54 AM By: Dan Olson 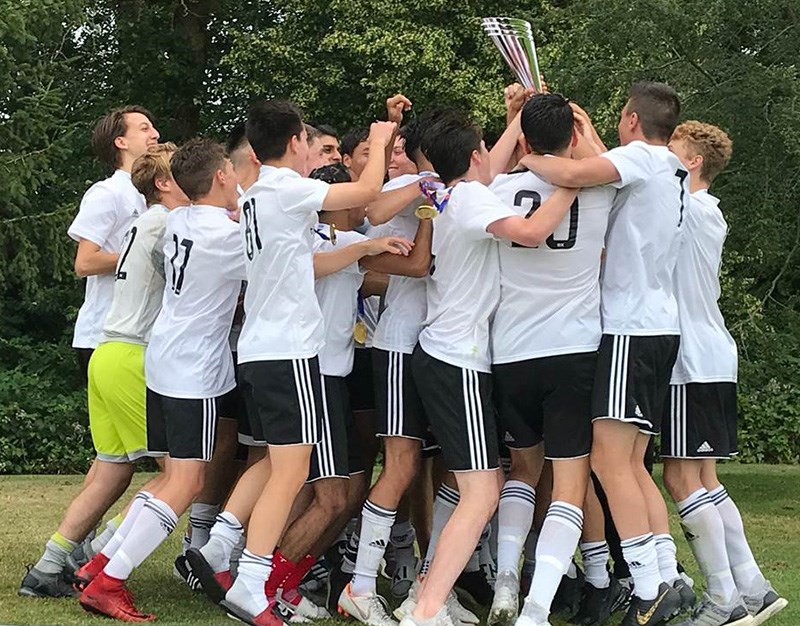 While it's been awhile since Mountain United celebrated its U17 provincial championship, the team's coach, Craig Ogilivie, said the side has worked hard to shake the dust off for the Toyota National Championships U17 Cup, that started Wednesday in Charlottetown, P.E.I. Port Moody's Hamish Ogden is on the team.SUMBITTED PHOTO

Port Moody soccer player Hamish Ogden is hoping his luggage on the return flight from Charlottetown, P.E.I., will be a lot heavier than when he and his Mountain United U17 team arrived in a quest to bring home a national trophy.

The B.C. Premier League side opened the Toyota National Championships U17 Cup Thursday with a 4-1 over Winnipeg Bonivital. Today, United faces Woodbridge, Ont. and on Friday they’ll play the Regina Bluestars.

That decisive victory in the opening game means United has already succeeded in its goal of making an early impact at the 10-team tournament. It was also an affirmation that the team has been able to shake off the dust that may have settled since the 17-member squad last played a meaningful match in June. Britain’s gone through two Prime Ministers in that time.

The roster of the Burnaby-North Shore based side is comprised mostly of Burnaby players, a handful from the North Shore, as well as contributions from New Westminster, Richmond and, of course, Port Moody’s Ogden.

With so many months passing since they defeated Surrey United for the provincial championship, Mountain United embarked for east coast wondering if they could pick up where they’d left off early last summer.

“From winning provincial, they have come back to this phase with a purpose,” United coach Craig Ogilvie said prior to departure. “Training has been of high intensity and really good quality.”

For a number of Ogilvie’s players, this isn’t their first national championship rodeo — many competed at the U15 nationals in 2017. Their desire to get back to a national stage has been driving force to their success, he said.

“They have been one of the dominant sides for years,” Ogilvie said, adding the only real kinks in the roster’s consistency was a couple of players who departed for the Vancouver Whitecaps youth program.

The B.C. will close out the round-robin portion of the national tournament on Sunday, against New Brunswick. If all went well, the championship final will be played Monday.

But, cautioned Ogilvie, his charges can’t afford to take any opponent for granted if they hope to celebrate Thanksgiving with a final match.

“We have a good chance due to our technical ability, solid defensive unit and an array of attacking qualities,” he said.

1741
Letter: New Coquitlam residents need to adapt to living on the edge of wilderness
891
‘What are they waiting for?’ asks Coquitlam parent worried about long wait for school isolation letter
838
Dentists, midwives and more approved to assist in B.C. vaccination clinics
754
Parent says Port Moody minor hockey not giving a full account of its COVID cases
719
New garden centre hopes to take root in Port Moody