For Dale Proctor and Raymond James, the roaring game exists in silence. The Port Coquitlam curlers are deaf.
Mar 23, 2019 6:17 AM By: Mario Bartel 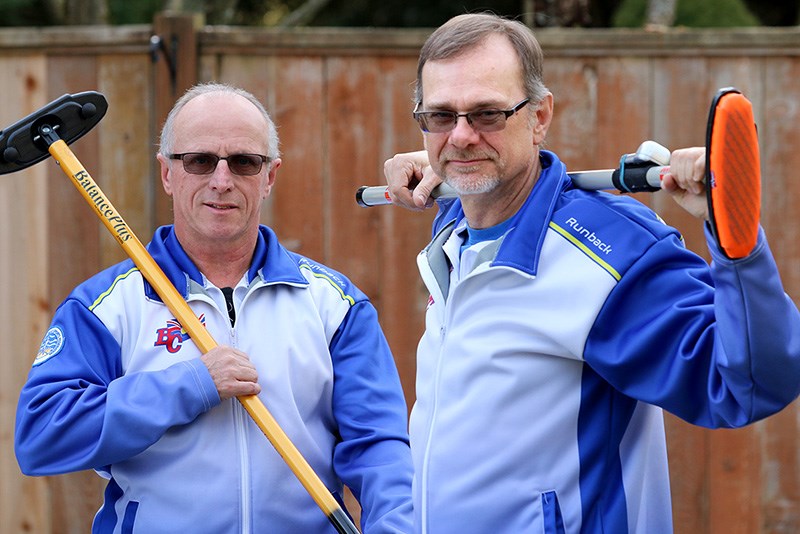 Dale Proctor, left, and Raymond James, are deaf curlers who will be part of the team representing Canada at the 2019 Deaflympics in Valtellina, Italy, in December after their Team BC won the Canadian championship in Winnipeg last year.MARIO BARTEL/THE TRI-CITY NEWS

For Dale Proctor and Raymond James, the roaring game exists in silence.

The Port Coquitlam curlers are deaf.

But they’re inability to hear the roar of the rocks as they glide down the ice, the brush of brooms guiding their trajectory and the holler of loud skips giving instruction hasn’t hindered their success at the sport. In fact, it may even help them.

“We’re able to focus more so we concentrate better,” said James, through a sign language interpreter.

The duo are part of the team from British Columbia that will be representing Canada at the Deaflympics in Valtellina, Italy, Dec. 12 to 21.

They earned that honour by becoming Canadian champions last year in Winnipeg.

It’s been a long slide to success for the squad that also includes Roger Chan, Craig Waldbillig and Frank Chung. They’ve been together for 10 years, and its two local members took to the sport when they were in high school.

James, 58, said he started curling when he was growing up in Saskatchewan and attending a deaf school in Saskatoon. All his friends went to the curling rink on Friday nights so he went to watch, then eventually picked up a broom himself.

Proctor, 59, also had friends who curled when he was growing up Coquitlam, so he joined in because he loved to sweep.

In such an auditory sport where players are guided by commands barked loudly by the skip, deaf curlers rely on hand signals. Sweepers also work in pairs so one can keep an eye on the signals being relayed from the shot-taker. It can be a delicate dance as they have to be especially vigilant that they don’t accidentally knock the rock with their brooms or feet while stealing a glance.

Deaf curlers also have to be wary opposing teams don’t catch them signing strategy, so some develop coded gestures not unlike a third-base coach in baseball gives instruction to a baserunner across the diamond with a seemingly random pattern of arm and hand motions.

The team’s ascent to the pinnacle of Canadian men’s deaf curling was a bit of a shock, as they defeated the hometown Manitoba team when it missed its last shot in the final end.

“This is the biggest thing we’ve ever won as a team,” Proctor said. “This is our dream come true.”

But it comes with a price.

While the Deaflympics are sanctioned by the International Olympic Committee, the national and provincial associations for deaf sports are only able to provide limited funding. So the curlers have embarked upon a months-long fundraising effort to make up the difference in the approximately $5,000 each it will cost to send each of the curlers as well as the team’s two coaches, that includes Coquitlam’s Katie Witt, a former Curl BC coach of the year.

They launched their fundraising drive with a learn-to-curl event earlier in March at the Royal City Curling Club in New Westminster and they expect to host several more events like poker nights and parties in the coming months.

• To find out more about helping the team with its fundraising, email Michele Meskas at michelerobson@icloud.com