Royals in a repeating mood 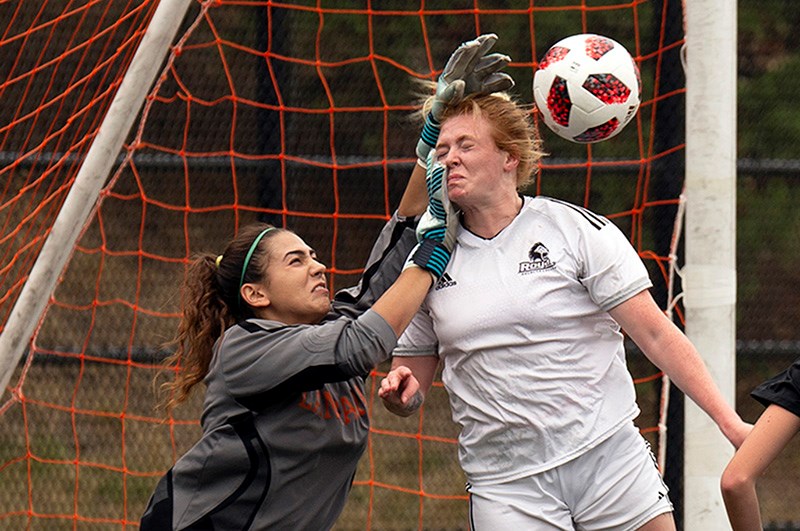 Douglas Royals forward Mikayla Hamilton gets a face full of keeper's mitt from Langara's Sierra Grieco in a match earlier this season.

After posting a middling 5-4-3 record, the defending PacWest champions enter this week’s provincials with a few items on their checklist.

Douglas secured the second seed entering the three-team tournament, which kicks off Friday at Capilano University with the semifinal against the host club, but have that motivation of a defending champ.

Going in as an underdog is added incentive.

With the regular season behind them and a national berth guaranteed, Royals head coach Chris Laxton says the goal this weekend is to lay the foundation for Nov. 7 to 10 at Coquitlam’s Town Centre Park.

“I’d like to see the team play a complete, composed game, and hopefully be in the (provincial) final,” said Laxton, who over saw the Royals run to the nationals last year. “We want to win it and defend our title, but we don’t have that extra pressure of needing it to advance.”

The Royals finished the regular season last weekend with a 2-0 triumph over the Langara Falcons, breaking a first-half stalemate on Mikayla Hamilton’s sixth of the season seven minutes into the second half. Sofia Flores-Aguilera added some insurance in the 69th minute.

For Hamilton, that was her league-leading sixth tally, but first since Oct. 6.

Picking up her second straight shutout was Alexa Gazzola, who was busy in stopping eight shots. The Falcons applied a lot of pressure, especially in the second half as a win was their only way to advance to the provincials.

Douglas’ defence, coupled with a sharp outing by Gazzola, made that improbable.

It followed a similar result two weeks ago, where the Royals blanked Capilano 3-0, on tallies from Mikaela Montagano, Sneha Sandhu and co-captain Sam Kell.

After a blip of inconsistency during September, which saw them post a sub-500 record, the team has strung together a better, more consistent effort. Giving everyone some starts, to help ease the physical strain and lessen injury opportunities, is hopefully going to pay off, said Laxton.

“That’s been big for us, to give everyone some good playing time,” he said. “We’ve rotated players into the starting lineup and that should pay dividends not only in the coming weeks, but next year as well.”

Captains Taylor Wettig, at midfield, and Kell, at a variety of positions, have set a solid tone heading into the playoff season, the coach added.

“We hope to be in the final and get another PacWest banner. I don’t think we’ve played our best yet.”

Douglas squares off against Capilano on Friday in the semifinal match. A win will put them in the final Saturday against first-place Vancouver Island. All games kick off at noon at the Burnaby Lake Sports Complex West.

That means they’ll have to play third-ranked Langara in Friday’s semi-final to earn a berth against top seed Capilano University in Saturday’s final. The winner of that game will go on to the national championship that will be hosted by Holland College in Charlottetown, P.E.I.

Douglas and Capilano finished the regular season tied atop the table with 26 points each, but the Blues attained the bye into the final with a superior goal differential. They outscored their opponents by 22 goals while the Royals scored 15 more than their opponents.

Not that they didn’t try to catch up.

Douglas closed out the regular season with an 8-0 win over Langara last Saturday at Coquitlam’s Town Centre Park. But a pair of 2-0 wins by the Blues over Vancouver Island University put the automatic berth in the PacWest championship match out of reach.

The Royals get another crack at Langara in Friday’s PacWest semi-final, 2:30 p.m. at the Burnaby Lake Sports Complex West.