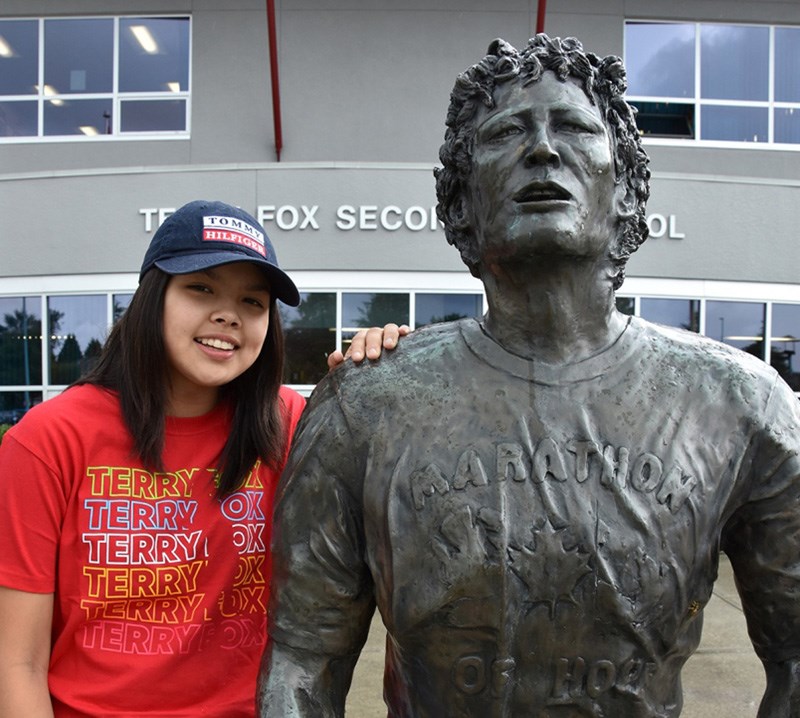 Karin Khuong's cancer was in remission in Sept., 2019, when she was able to be the keynote speaker at the Terry Fox Hometown Run.

A young basketball player who inspired her teammates at Terry Fox secondary school as she battled cancer will continue to inspire student-athletes in Port Coquitlam.

Karin Khuong passed away Oct. 4, two years after she was first diagnosed with rhabdomyosarcoma, a rare soft-tissue childhood cancer. She was 16 years-old.

Last Friday, a Go Fund Me campaign in her memory was launched to raise $20,000 for a scholarship fund that will award $2,000 a year to deserving local student-athletes headed to post-secondary studies for the next 10 years.

In a message posted by Karin’ mother, Jennifer, the planned duration for the scholarship fund matches the number of years her daughter played basketball.

“Karin and our family made beautiful friendships in the basketball and school communities and we are forever grateful to the teachers, coaches and teammates who inspired her every day,” said Jennifer Khuong.

One of those friendships was with the family of Steve Frost, the associate director of marketing and communications for athletics at Simon Fraser University, where Khuong hoped to play someday.

“With her determination, we know she would have achieved it,” said Jennifer in her message.

Frost and his wife, Teena, were Karin’s first coaches in the PoCo Galaxy community program that emerged from a free girls basketball program that Teena had started at Castle Park elementary school. His daughter, Kianna, and Karin were also best friends and travelled together to California to catch a Golden State Warriors home game and meet the NBA team’s players.

Frost said Karin’s loss is being felt throughout the basketball community.

Khuong was about to embark on her freshman season with the Terry Fox Ravens junior girls basketball team in 2018 when her cancer was discovered, as she was being examined for a sore leg.

The illness — and required a treatment regime of high-dose chemotherapy to help keep it at bay — kept Khuong off the court, but her teammates rallied around and went on to cap a perfect season with a provincial championship.

Last December, with the cancer in remission, Khuong was able to return to the basketball court with her teammates, now playing for the senior team. But the disease returned and she was on the bench as the Ravens made it to the final of the provincial AAAA championship tournament, where they were defeated by the Semiahmoo Totems.

But Ravens coach Mike Carkner said the group still felt like winners as they showed resilience and had been able to give Khuong and her family some memorable moments, including the opportunity to get on the court in the waning moments of a preliminary round game.

The Karin Khuong Memorial Scholarship fund has already raised more than $5,500 of its $20,000 goal.