The total amount of money Douglas College has available for athletic scholarships might cover the cost of a meal program for a year for one football player at a big time U.S. university.
Oct 13, 2017 8:00 AM By: Mario Bartel 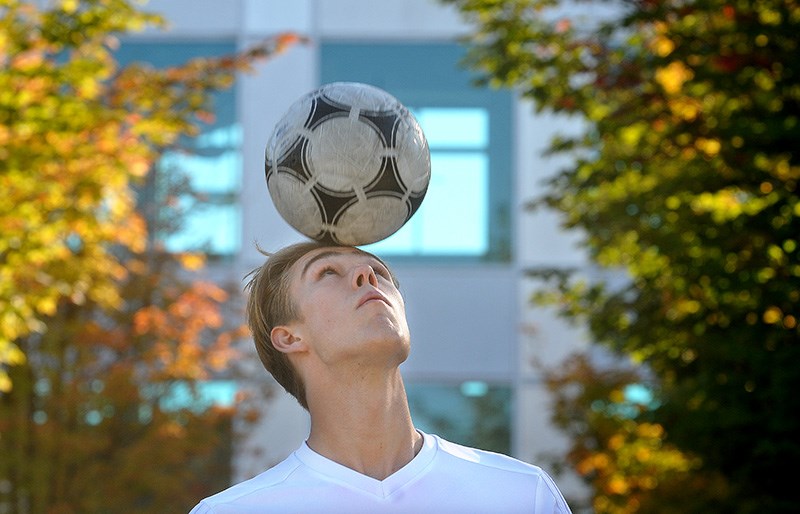 MARIO BARTEL/THE TRI-CITY NEWS As a student athlete at Douglas College, Coquitlam's Quinn Dawson not only has to juggle his duties to the men's soccer team, he also has to manage time for schoolwork and his part time job at Home Depot. So, he says, the $1,200 he receives each semester to pay tuition for three of his courses goes a long way to helping him focus his attention on school and soccer. The Dr. Charles Best grad says having access to that athletic scholarship money was a "pretty strong factor" in his decision to attend Douglas.

The total amount of money Douglas College has available for athletic scholarships might cover the cost of a meal program for a year for one football player at a big time U.S. university.

Douglas recently hosted its first annual Scholarship Breakfast to raise awareness of the financial assistance it can extend to student-athetes as well as shake the tree for additional funds.

McLennan says being able to help the school’s student-athletes off-set expenses like tuition, books and even the “pay-to-play” fees required of some sports can be a tipping point in their decision to attend and compete at Douglas.

Robby Toor, the coach of the men’s soccer team at Douglas, sees the pay-off from those scholarship dollars on his pitch every day. If players don’t have to worry about pulling an extra shift at their part-time job so they can pay for their textbooks, they’re able to commit more of themselves to their athletic and academic endeavours.

“They come to practice stress-free and do what they love,” says Toor, who first got involved with Douglas’ soccer program 15 years ago as a player and has been on the sidelines as an assistant and head coach since 2007.

Back then, he says, most of the team’s players made their decision on where to attend school based upon where their buddies were going to play.

“It wasn’t about getting a scholarship,” he says.

But today’s student-athlete is looking at how their athletic aspirations combine with their whole post-secondary experience, Toor says. “Kids are looking for the right fit.”

As the athletic department’s academic coach, as well as the coach of Douglas’ baseball team, Cav Whitely works with the school’s student-athletes to ensure all the pieces of their school experience snap together. He says it’s important for student-athletes to know the school has resources available to support them and help them achieve their goals, in competition and in the classroom.

“When athletes come here, they come here for the sport, but we also have to help them establish a Plan B for what they’re going to do for the rest of their life,” Whitely says.

Taking a financial worry off their plate ensures those student-athletes have a little more time and energy to focus on that Plan B by being able to better balance their studies with their athletic and work commitments. And the modest level of that assistance keeps them grounded without the pressure and expectation that often comes with the big-money full-ride scholarships dangled by colleges and universities south of the border.

“The student-athletes are treated like they should be treated,” says Whitely. “It allows them to develop in a less pressure-filled system but still benefit from top competition.”

As part of the school’s effort to increase the profile and scope of its scholarship program, the athletic department is reaching out to alumni, connecting players from the past, present and future.

“It becomes a calling card for the alumni,” McLennan says. “It’s an engagement opportunity that brings people into our culture.”