Student-athletes try to keep motivated in practice as they keep an eye on their post-secondary aspirations
Nov 7, 2020 9:00 AM By: Mario Bartel 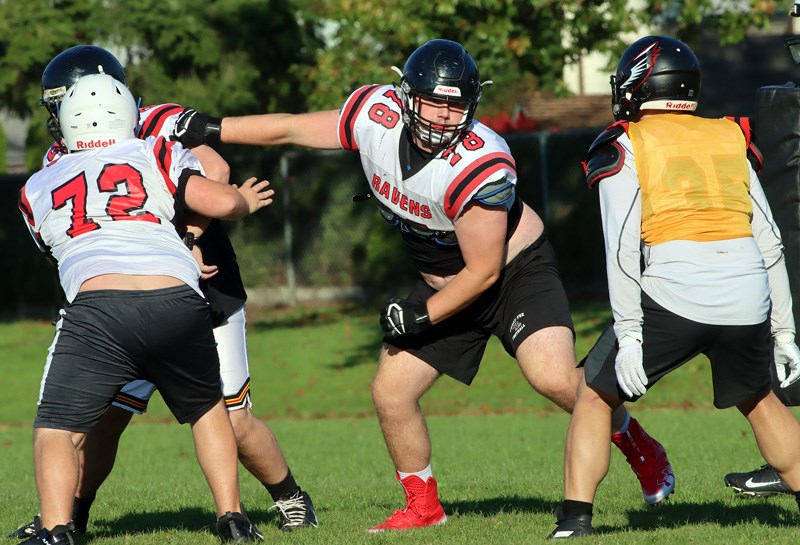 The COVID-19 pandemic has dimmed the lights of Friday night high school football. Few people are feeling the darkness more than the seniors in their graduating year.

As public health restrictions to limit transmission of the virus keep teams on the sidelines — their activities limited to practice and the occasional intra-squad scrimmage — Grade 12 players are worried they’re missing out on what should be the crowning achievement of their student-athlete careers so far.

They’re also anxious about the future.

Those who’ve yet to get recruited are working hard to maintain lines of communication with prospective coaches and put a final polish on stale highlight reels to showcase their talents in the absence of fresh exploits.

Players who have already landed a post-secondary opportunity are trying to make sure they keep their eyes on the prize, by working out as hard as they can in preparation for starting over again at the next level of competition and finding a way to maintain their game face without games.

“It’s kind of a bummer,” said Jordan Sye, a senior offensive lineman for the Terry Fox Ravens who recently committed to the Wilfred Laurier Golden Hawks for next year. “Playing games is kind of the highlight of your senior year. You hear all the kids and parents yelling; it’s a feeling I’ll never get.”

“It’s weird,” said teammate Sean Olynik, before a recent practice. “Now is the time we’d be getting ready [for games]. Instead, you’re getting ready for a maybe.”

Olynik, a defensive end, recently landed an offer to play next year at the University of Regina. But he said it wasn’t easy. He spent much of the summer reaching out and following up inquiries from coaches over Twitter, sending them links to videos of game action and building relationships.

Sye started working the keyboard last November, long before the public health crisis threw a wrench at his football aspirations. The hard work of sending messages and sharing links to game footage paid off when he received offers from the University of Alberta, University of Ottawa and, finally, Wilfred Laurier.

Sye said after talking to former teammates who landed with the Golden Hawks, he knew that school was a good fit.

While knowing their football and academic destinies a year out has brought some certainty, not being able to play games has brought a different kind of pressure to be able to maintain the form that helped them land scholarship offers in the first place. Working out in the weight room and running shuttle drills on the practice field only go so far.

“We get drills, but it’s not the same as actual game play,” Sye said. “We’re not getting in-game experience.”

Ravens coach Martin McDonnell said his staff is doing the best they can with the cards they’ve been dealt by public health authorities and the B.C. Secondary Schools Football Association. Instead of practising every day leading up to Friday games, the team gathers three times a week. The tedium of repetitive drills is relieved by a little seven-on-seven touch tournament on one of those days.

“We can only do so much,” McDonnell said. “Playing these games on Friday night, it’s like a baptism of fire.”

For the players, keeping their enthusiasm for football high when the pandemic has already robbed them of so many of the high school experiences they were looking forward to can be wearying.

“It’s hard sometimes,” Sye said. “Who knew this would happen?”

“My parents are worried,” Olynik said, adding he’s had to limit his time on social media platforms like Twitter because the pandemic “is in your face all the time.”

McDonnell said maintaining the routine of getting ready for games — even if there aren’t any games — is still important.

“We just try to keep them engaged and interested in football,” he said. “They’re not just giving up.”

Olynik and Sye are confident their dedication will be rewarded.

“It’s one step closer to a goal,” Sye said. “You’ve just got to focus, keep working hard and going forward.”

“I’m excited to meet people and go to college,” Olynik said. “When I get there, everyone else will be at the same level too.”