A pair of Tri-Cities’ soccer prospects are already mapping out their future in the sport.
Sep 5, 2017 3:42 PM By: Tri-City News 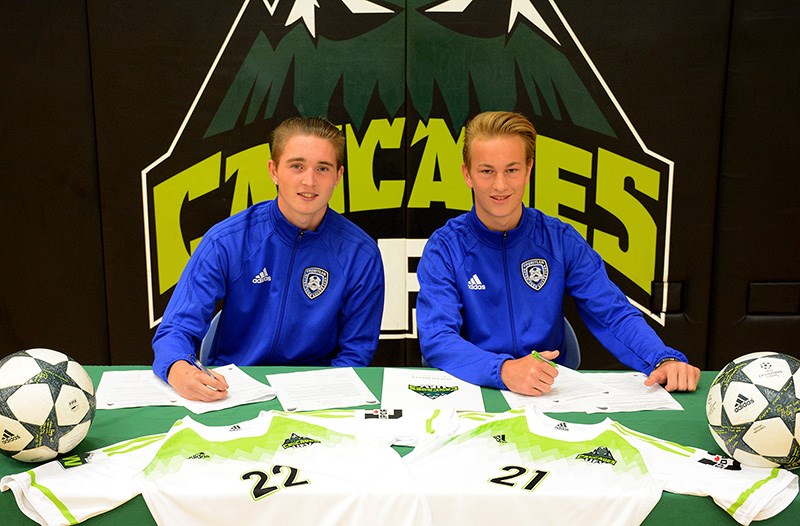 DAN KINVIG/UFV ATHLETICS Andrew Peat and Trevor Zanatta sign on the dotted line to make their commitment to play soccer at the University of the Fraser Valley in 2018.

A pair of Tri-Cities’ soccer prospects are already mapping out their future in the sport.

Andrew Peat, of Port Coquitlam, and Trevor Zanatta, of Coquitlam, signed commitments to play for the University of the Fraser Valley Cascades in 2018, after the Coquitlam Metro-Ford teammates complete Grade 12.

Peat, a forward, has played for the B.C. provincial team program since 2014 and he was Team B.C.’s top scorer at the recent Canada Summer Games in Winnipeg, Man., where he scored five goals in six matches.

“He’s a massive recruit, and he’s had a lot of other offers,” Lowndes said. “He’s a natural goal-scorer — pace, left-footed, strong, dynamic.”

Zanatta is the captain of his Metro-Ford club team and he played on the provincial side in 2015 and 2016.

“Trevor is a dynamic central midfielder,” Lowndes said of Zanatta. “Physically he’s mature and ready to come and compete for minutes right off the bat.”

Both players said the opportunity to remain teammates as they moved forward in their soccer careers was enticing.

“With my buddy signing, it’s a perfect fit for me,” Peat said.

“It’s local, and the commute is easy,” Zanatta said. “I felt it was the best choice for me.”

Both Peat and Zanatta will be headed to New Brunswick in October to help their Metro-Ford squad play for a national championship.